Gaudagnino Adds An Air Of Elegance To “Suspiria” 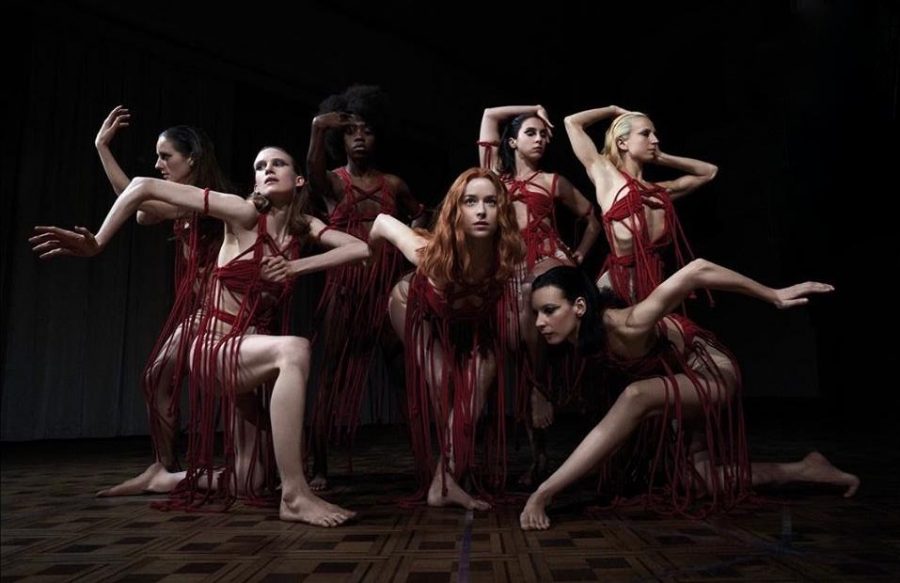 If the new Suspiria tells us anything, it is that Luca Gaudagnino’s languid, slowly-unfolding aesthetic palette is among the most protean we’ve seen. Compared to the lovely, gilded rays and burbling beauty of the Italian countryside in Call Me By Your Name, the re-making of Dario Argento’s giallo classic represented an opposite-end extremity. And yet Suspiria works as a unique art-house horror film, existing in the heightened, visual-aesthetic realm of It Follows and Hereditary, but acting as no mere pastiche. The triumph of Gaudagnino’s Suspiria comes from its absorptive, atmospheric density — the camera moves as if it is it a gliding specter, color drains from the screen, only to come back in drenched intensity. All our senses are absorbed and alert. Although Suspiria’s problems emerge as Gaudagnino tries to ratchet up Argento’s original, the full-on sensory experience makes it gush of hallucinatory ecstasy, and Gaudagnino’s particular skills make the film an oasis of provocative, tantalizing splendor.

The story centers around Susie Bannion (Dakota Johnson), a Mennonite from Ohio who has long been fascinated with the Markos Dance Academy in Berlin. The year is 1977, and we open with Susie’s sick mother, a domineering, puritanical nun, who considers Susie to be “the sin [she’s] smeared on the world,” and whose eerie, rheumatic wheezing sounds like an axe being dragged on tarmac. Susie soon leaves her sick mother and goes to Berlin to audition for the company, who manages only to squeeze her in due to a recent vacancy left by a dancer named Patricia (Chloe Grace Moretz). Run by a group of German women and headed by the omnipotent matriarch, Madame Blanc (Tilda Swinton), the Markos company is the sort of hermetically-sealed place of demand not unlike J.K. Simmons’ band studio in Whiplash. The dancers are pushed to their physiological and psychological limit in an intense, contortionistic dance directed by Madame Blanc. After a stellar audition, Susie is admitted to the company and begins to take on the role of the lead protagonist in “Volk,” the company’s latest production. But as Susie rises, others fall prey. There is a scene early on when Susie steps in for a missing dancer, in which her triumphant twists and spins parallel an unwitting death knell of broken limbs. It is a riveting, repulsively engrossing scene of which there are many more to come.

Susie soon befriends another dancer, Sara (Mia Goth), who becomes increasingly suspicious of the matrons’ activities and intentions, especially after a clandestine meeting with Patricia’s psychiatrist, Dr. Joseph Klemperer (also Tilda Swinton, in unrecognizable prosthetics), who details Patricia’s diary-logged suspicions to Sara. What Patricia seems to have discovered is that the company is run by a coven of witches, who ruthlessly instruct and detain the dancers until they must kill them, the goal being to find a vessel for Mother Markos (Swinton, again) to inhabit. Swinton’s acting is unsurprisingly well-sheared into its different degrees — that of the cold, in-charge company director with mystical powers, the even colder, withering husk of Mother Markos and the wrinkly (and detrimentally curious) psychiatrist. She vitalizes each character on their own terms. Johnson, too, acts with the curious drive of an aspirant, and later, the power of a rightful heir.

But for all of Suspiria’s interesting esoterica, as well as some fine acting, it is the languid precision of Guadagnino’s direction and cinematographer Sayombhu Mukdeeprom’s shot-making that guides Suspiria into its believably supernatural terrain. What we get is a distinctive, art-house horror film in which Guadagnino proves his visual ideology to be adaptable to any subject matter, and pleasurably so, in a way that entails a slow but meaty absorption into his world of storytelling. This alone will make his films worth watching in the future. The score as well, by Thom Yorke, imbues the film with a wistful dread. Like the jagged-edged moan of a one eternally lost at sea, Yorke’s composition guides the narrative further into a will-o-wispy echo-chamber of lost souls.

Yet Guadagnino’s prodigious commitment to his aesthetics is a double-edged sword. He alone makes Suspiria a film worth seeing, if only due to its idiosyncratic departure from most anything you will see this year. But it is perhaps this very commitment to artistry that floats the film into its overlong, 152-minute run-time. With about thirty minutes left, and a few sequences up until that point, the consummate visuals bloat the film past high-art and into indulgent fever dream. Coherence, or progression of any kind, crumble into the absurd, orgiastic fit the last sequence entails, and, sadly, the problem sits not only in the last thirty minutes, but in parts of the preceding 120. Although I am never one to be offended by “excessive violence,” certain moments in Suspiria seem to needlessly focus on, say, someone’s compound fracture, or multiple capital explosions in the name of our (and Guadagnino’s) febrile hallucination. It becomes an unseemly, Final Destination-esque spectacle of depravity that detracts from all the creepy, aesthetic buildup Gaudagnino achieves.

This is where some will say the new could have drawn from the old, that Argento’s original could have informed a more cogent update, but how effectively? If Gaudagnino embraces Argento’s B-movie simplicity, his art would have been a banal re-telling; yet when Gaudagnino goes full-bore art-house horror, he finds himself taking missteps. Perhaps the middle-ground could have been achieved if Guadagnino’s engaging style was pared almost directly with Argento’s original, injecting the already great visuals with languid grace and trance-like momentum. That may have allowed Suspiria to move at a different, yet effective pace, without pushing the end into gobbledygook. But retro-diagnosis is always 20/20, and the only film we see is the one we receive.

In art, the consumer usually needs to feel like he is contributing something, that they are using their mind to understand, on however low a level. Plot, motive etc., become clear as a film unfolds, and a great artist can lead you in subtle ways to make you believe you’re solving it with them. In some films, we solve nothing, but immerse outselves instead in the intersubjective nuances of the characters. In Suspiria, the togetherness we feel with Guadagnino is in the fact that he slowly replaces our banal vision with his grandiose one. Throughout the film, we form the bond of perception, and share an all-absorptive angle on life. Although that angle, from time to time, shakes under the weight of its unprecedented mode of seeing, it nonetheless proves itself to be revolutionary. Suspiria is far from a perfect film: the vague, political-metaphoric didactics of late-70s Berlin are unnecessary and uncommitted, the length hurts conviction and the end melts into morass. But the visual artistry of Gaudagnino saves Suspiria from its own obscurantism and makes it a scintillating entrée into one of our great director’s artistic vision. For Suspiria the film, we can only ever be half on-board, but for Gaudagnino’s visual revolution, we must be eternally grateful.