Demon Deacons Are Going To Birmingham 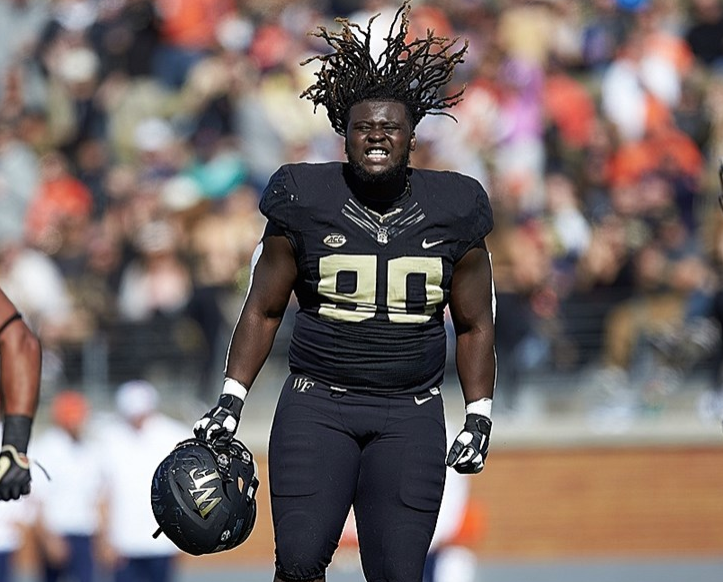 After their triumphant win against Duke on the road by 59-7 to move to 6-6 on the season, the Deacs were eagerly waiting to find out where they were going to play for their third-straight bowl game under Head Coach Dave Clawson. Wake Forest will play at the Birmingham Bowl on Dec. 22 against Memphis (8-5). We are roughly two weeks away from the big game.

Leading up to Selection Sunday, it appeared that the likeliest bowl game was the Gasparilla Bowl, with multiple sports writers previewing a matchup between Wake Forest and USF (7-4). Instead, due to the huge number of teams on the ACC eligible for post-season play this season, 11 in total, this year’s selection ended up being far more unpredictable than usual. The Deacs ended up being selected to the Birmingham Bowl to face the Tigers, who finished the season as runner-ups on for the AAC Championship after a 56-41 loss to unbeaten UCF (12-0).

“We’re fired up here in Winston-Salem. We’re going to our third-consecutive bowl for just the second time in school history. We’re excited to go to Birmingham,” Clawson said after the bowl announcement. “We’ve heard great things about the hospitality and we’ll be playing on a historic field and venue against a very good, very talented, very successful Memphis football team from the AAC.”

The Deacs will be facing one of the most powerful rushing attacks in the nation, led by soon-to-be All-American RB Darrell Henderson. Despite giving up the lead late to UCF, the Tigers jumped up to a 24-7 lead on the first quarter by pounding down the ball with Henderson and RB Patrick Taylor Jr. By halftime, the Tigers had already amassed a total of 336 yards. Henderson is second in the nation with 1909 rushing yards on the season alongside 22 total touchdowns. He also boasts the best yards-per-carry average, 8.9, among running with at least 120 attempts this season, he had 214 carries in 2018. Needless to say, he’s the most explosive player on this Memphis football team and the main reason why the Tigers have the fourth best rushing offense in 2018 with 562 yards per game through the ground.

Henderson hasn’t announced if he will declare for the upcoming NFL Draft or if he’ll sit out the game to prepare for the Draft.

However, make no mistake, regardless if Henderson plays the game or not, Memphis will look to exploit the running game early against a Wake Forest defense still dealing with lots of injuries. Memphis has pretty good offensive line with all-AAC players in G Dustin Woodard, LT Trevon Tate, and G Mason Denley. Also, don’t overlook RB Patrick Taylor Jr. Playing alongside an All-American in Henderson doesn’t get a lot of people talking about Taylor, but the junior running back had really good numbers in 2018. Taylor had 1012 yards to go along with 15 rushing touchdowns, while averaging 5.7 yards per carry.

Wake Forest will have their hands full on defense, regardless of who is lining up behind the Tigers’ QB Brady White. Fortunately, the Deacs will be getting some much-needed reinforcement with players coming back from injury.

“It’ll be good to get [cornerback] Amari Henderson back, which will be a huge boost for us. [Running back] Matt Colburn will be back, which is a huge one to get back,” said Clawson. “[Safety] Luke Masterson was really banged up at the end of the year, so this will give him a chance to get healthy. [Linebacker] Demetrius Kemp played in the Duke game but was limited. There wasn’t a lot he could do. He’ll be back at full strength.”

On the flip side, All-ACC receiver Greg Dortch sustained a left-arm injury during the Duke game and might not recover in time to play in the bowl game. This would be a huge blow for the Deacs as Dortch is the focal point of their passing game. So far, the details of what kind of injury or how it happened are still unclear. An official statement from Wake Forest about his availability will probably be issued closer to the day of the game.

Both teams have a lot of talent on offense and can get up to a big lead very quickly in the game. Expect this one to be a back-and-fourth offensive shootout. It might come down to one of two key stops on defense to win this game. Wake Forest is tied with Memphis on the all-time series between the two teams with two wins apiece. If the Deacs win, this will be the first time in school’s history that Wake Forest wins three-straight bowl games.

The Birmingham Bowl will be played at Legion Field in Birmingham, AL, Saturday, Dec. 22. The game is set to kickoff at noon ET and will be broadcasted at ESPN. Tickets are available through the Wake Forest Sports website. This season has been nothing short of remarkable. Let’s send our seniors out in style with a huge crowd on Dec. 22. Enjoy the game, folks.