How Wake Forest And The ACC Fared In Bowl Selection 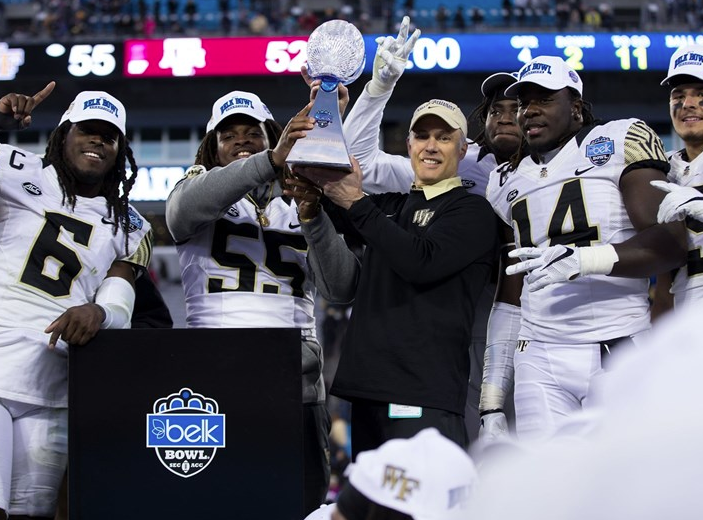 It was the day every Wake Forest fan was waiting for after that magical game at Duke where we solidified bowl eligibility for a third straight year. Where would we end up? Detroit? Shreveport? Tampa? Dallas? Birmingham? Maybe even Annapolis? The possibilities were endless and the speculation was rampant. Essentially every projection on Sunday was showing the Deacs in Tampa, most of them playing University of South Florida on Dec. 20. This would have been a pretty favorable game for the Deacons, given the nice weather, good matchup and big-time stadium. The largest concern going into this was the date. Dec. 20 is a much earlier date than most of the other bowls, which leads to discussion of how this would work with finals, given the traditional four-day early arrival.

Around 4:30 p.m. on Sunday, the wait was finally over in a surprising turn of events. The Gasparilla Bowl in Tampa ended up being USF after all, yet against Marshall rather than the Deacs. This was shocking for basically everyone, including myself. The Deacons are officially headed to the Birmingham Bowl in Birmingham, AL on Dec. 22. They will take on University of Memphis, of the American Athletic Conference. Memphis came close to beating UCF in the AAC Title game but ultimately couldn’t hang on. They finished the season 8-5 with a record of 6-3 in the conference. They came close to beating UCF twice throughout the season, which shows their strength, yet they also lost to Tulane, whom the Deacs beat to start the season. For those who cannot attend, like me, who will be in the air en route to Kauai, it will be broadcasted on ESPN and the ESPN app across the nation. The bowl being on a Saturday is also helpful for working Deacs who could potentially go to the weekend time.

The day started promptly around 12:30 p.m. with the announcement of the College Football Playoff teams. I honestly think the committee hit the nail on the head with the teams, given that I do not think that Ohio State, the Big 10 conference champions, nor Georgia, who has two losses and didn’t win their conference, deserved to be in over the four above them. Clemson, Notre Dame and Alabama were all undefeated. Granted, Notre Dame is not in a conference and therefore does not play a conference championship, yet they demonstrated that they were a formidable team over the whole year. And no, the struggles in the USC game do not justify them being eliminated after an undefeated season. Alabama and Clemson were obviously in, both undefeated and conference champions. I would describe Oklahoma as the best of the rest. Their team, and Kyler Murray in particular, has looked more impressive than fellow conference champs Washington, Ohio State and fan favorite UCF. Sorry not sorry, but a conference champ with a potential Heisman winner deserves in. Georgia at five is a little dicey for me, but yes, they almost beat Alabama, so they’re definitely good, and Ohio State looked good against Michigan.

After the CFP announcement, other bowl committees evidently went into scramble mode to figure out their plans. In terms of other ACC teams, Virginia will replace Wake in the Belk Bowl this year, as they will play South Carolina in Charlotte. Another former Deacon location sees Virginia Tech in the Military Bowl where they will play Cincinnati. Syracuse is heading to the Camping World Bowl in Orlando against West Virginia, while Miami will head up to New York for the Pinstripe Bowl against Wisconsin.  Georgia Tech will take on Minnesota in the Quick Lane Bowl in Detroit, Boston College will play Boise State in the SERVPRO First Responders in Dallas, Pitt is headed to play Stanford in the Sun Bowl in El Paso, NC State heads to the TaxSlayer Bowl against Texas A&M in Jacksonville and Duke heads to Shreveport, LA to take on Temple in the Independence Bowl. All in, the ACC sent 11 of its 14 teams this year to bowl games. It was an interesting assortment, given that neither Florida State nor Louisville is going to one, which they have in years past. It should be some good football matchups and let’s hope that both Wake Forest and the ACC are victorious!