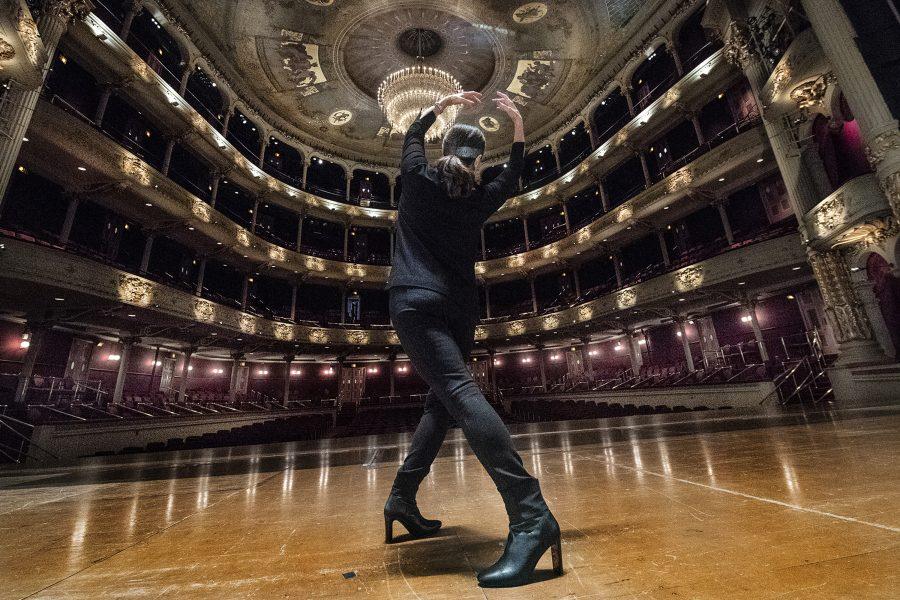 Former Pennsylvania Ballet dancer, Barbara Sandonato performs a basic foot position on the main stage at the Academy of Music in Philadelphia, Pa. Thursday, November 29, 2018. 2018 is the 50th anniversary of Pennsylvania Ballet dancing Nutcracker. The first person who danced Marie/Clara was Barbara Sandonato - who also was the first dancer in the company and its first principal dancer.JOSE F. MORENO / Staff Photographer

On an unspecified date in an unspecified location, Hayden Graser and Peter Schlachte had the opportunity to watch a Wake Forest ballet class practice the movements that they had perfected over the course of a semester. We were especially taken with the poetry-in-motion of a student named Nikolas, and we have spent weeks analyzing his efforts and digging into his history. These are our conclusions:

Rumors have it that Nikolas is not human but angel personified, descended from higher powers to revitalize this shattered planet. We thought these statements might be hyperbole, but upon entering the classroom, we witnessed what professional critics have called divine: Nikolas moving through his natural habitat with incomparable grace and elegance, paralleled only by his reflection in his studio’s large mirrored wall.

Nikolas may be a student in name, but his true essence is that of a dancer who has reached the pinnacle of his discipline. It was early afternoon on a sultry Friday when Hayden and Peter had the privilege of witnessing Nikolas craft his spatial art during a Wake Forest dance class. To compare Nikolas’ movements to a gazelle elegantly prancing in a meadow would be a disservice to his mastery of ballet. He has the focus of a tiger or an astronaut, pouncing on the event horizon of our souls.

He wears pointe shoes, gym shorts and an unassuming white tee with a hole in the right armpit. While his humble nature requires that he avoid drawing attention to himself, his overwhelming presence permeates the studio. He is the star around which all celestial bodies revolve — stare too long and you too will be blinded by his brilliance. As he practices his echappé, it becomes clear that each of his movements are painstakingly calculated and rehearsed, reminiscent of the gentle flow of a mountain stream untouched by man. Even his professor often appears dumbfounded and speechless at the sight of Nikolas cavorting across the room. At one point, emphasizing Nikolas’ precision, his professor addresses the rest of the classroom: “if you move this much,” he signals with his fingers, “it’s over for you.” For Nikolas, however, it is never over. His success lies on a razor thin edge, but he never falters. Indeed, most evenings, Nikolas, under moonlight streaming through his window, practices his Temps Levé and his Développé to perfection — his only audience the white-as-pearl guinea pig whom he calls his closest friend.

In our minds, a singular moment captures the essence of Nikolas. It occurs as he performs his Grand Jeté across the classroom’s wooden expanse. His grace — dare we say, his perfection — is embodied in the silence of his footsteps as he touches the floor, his feet soft as petals from a rose drifting to this silk blanket that we call the ground. It would not be hyperbole to call Nikolas’ mastery of ballet the single greatest feat of humanity in the 21st century.

As stunning as Nikolas’ mastery was, in all honesty, it was a pleasure and an honor to watch all the dancers in this class practice and perform some amazing and challenging pieces. We thank each and every one of them deeply for the opportunity to watch as they worked.