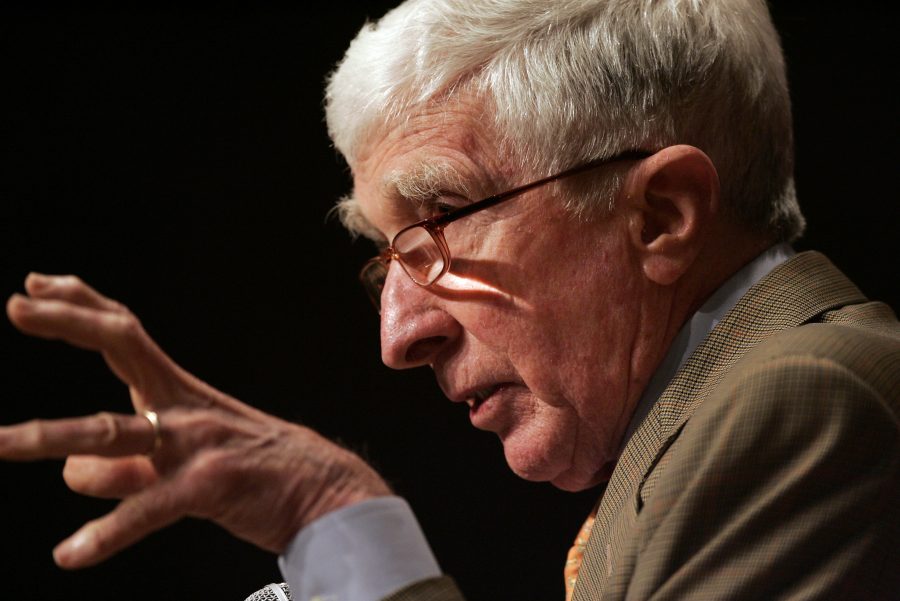 In this June 6, 2007 file photograph, John Updike speaks to a gathering at the Free Library of Philadelphia and reads from his book "The Terrorist." His main goal as a literary journalist is to describe and explain the work before us, and account for its impact and in a marvelous prose style. (Michael Bryant/Philadelphia Inquirer/MCT)

Reading, to me, is mostly an exercise in admiration. Admiring an author’s stylistic and syntactic achievement, whether in the work as a whole, or in a single sentence, is an ineffable, invaluable gift. It is a reassurance that someone on earth is able to parse out a beauty from the morass, to put forth words, with their symbolic rushes and concatenations, that force from the reader an almost involuntary excretion of an extraordinary substance. It becomes the feeling of a mystery partially solved, of life perfectly packaged.

When reading John Updike, one is immediately struck by this very thing. His ability to compose a sentence or situation (I use a predominantly musical word because Updike’s lyricism, sentence-by-sentence, is like a ringing out of the ephemeral notes of life) is unrivaled. As a professor of mine once noted, “You will not find a better sentence in all of American letters.” Updike’s singular virtuosity at once draws you close with its engaging detail, and kindly pushes you away, the inevitable distance drawn between a great artist and even the most learned student.

But aside from the admiration evoked with Updike’s writing, there exists an even more important subtext, one of emotional, and more importantly, memorial significance. For although many authors can write a sparkling sentence, few can incite the faculties of one’s own memory like John Updike. Updike’s specific skill for building moments, at once emotionally effusive and poignant, elevates him to a greater plane of consciousness.  In Rabbit, Run, when Harry “Rabbit” Angstrom, an adult, sees through the lit-window of his childhood home “himself sitting in a high chair,” we are struck, especially when “a quick odd jealousy comes and passes” through him. What is this sentence? Why does this happen? we ask. We are successively told: “It is his son.” His partial likeness, his son, enraptures Harry and his parents with the adorable machinations of his dinner-table behavior, and one is struck by the beauty of the present, while immediately aware of emotional surge Harry experiences from his own childhood. After I read this sentence, contextualized by the whole paragraph, I could not continue with my reading. I was forced to stop, as I was confronted by the impassable window of my own childhood. For the next period of time, I sat and thought, recalled memories, times, moments of joy and sorrow, all compiled onto that oft-flat point on the timeline of my life called “childhood.” Updike’s writing once again gave texture and movement to memory, it reignited the events of my pre-teen life into the set pieces they are remembered as. Their concomitant emotions flooded with each new remembrance, and I was taken on a kaleidoscopic journey. I walked over to the various photos sprinkled through my house, of myself and my family in times long ago, and welled up at the prospect of both my lost innocence and my old, innocent happiness. It was beautiful, truly.

What great books do (in part) is sear their evocations into your memory. They recreate emotional scenarios and are second-degree ignitions, brought to you through language, that confer with memory and choose, in seconds, to stir every cell in your being. John Updike is among the best at this, for the reasons I have expounded. His greatness comes not only from the totality of his linguistic prowess, but in the little, sharp pricks that open up vistas of emotional memories. Quite literally, you have to take him in doses.