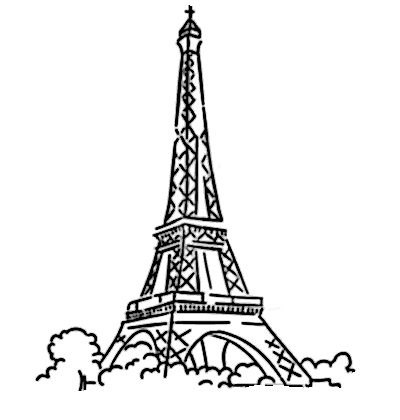 Friday morning I walked into Atelier catching an aroma of freshly baked croissants and coffee. It was my third time visiting the patisserie. Previously a punk bar in the ‘90s, Atelier was opened in the fall of 2014 by owner and chef Pablo.

Upon entrance into the café, I was greeted by a French flag signaling my arrival. The café houses many souvenirs from France as well as a beautiful mural painted on the right wall and some background tunes. Several tables and couches lay ready for relaxing, studying and more.

As I waited in line to order a raspberry brie croissant and red-eye coffee, employees took their time with each customer and his or her order.

It struck me as unusual, but this customer-by-customer process speaks to the personal touch and culture the café is trying to create.

The word atelier means “studio” or “workshop” in French. I sat down with my coffee and croissant and watched how every product made is handled with care.

Each product was a work of art and each day you visit Atelier, there are new pastries and croissants waiting to be discovered.

Pablo joined me after putting out a fresh batch of almond croissants filled with chocolate and some classic pains au chocolat.

I had come in four weeks earlier with a friend and we each enjoyed an almond croissant with chocolat along with our delicious coffees.

The crust of the croissant was golden brown and each savory bite was  followed by a chewy texture with some flakes of crust leaving the pastry and falling back on the plate. Toward the center of the treat lay a creamy texture of chocolate and almond.

My friend and I decided this would be our secret spot.

I brought my parents into Atelier the week later during Parents’ Weekend for them to experience the delight. My father is French and was born and raised in Paris.

Our order was large, but we finished all of it before leaving. My parents, who commit to a pretty strict paleo diet, savored each bite. They were taken back to Paris by the familiar taste and aromas.

My father insisted upon meeting Pablo to tell him that he has “been living in the U.S. for 15 years … [and that this was] the best croissant and pain au chocolat [he] had anywhere in the U.S.”

That was when I decided I could no longer just keep this place to myself.

Pablo received his training at the Cordon Bleu in Paris, France. In Atelier, he brings a wonderful cross-cultural approach to baking.

“The stuff that I bake isn’t specifically French,” Pablo said.

“And it isn’t specifically American, though I grew up half a mile from here … it’s sort of a combination. But the peanut butter American stuff, that’s so American — on a French foundation.”

Many pastries on display are creatively combined to deliver an explosive and continuously savory taste with each bite. He admits to me that his favorite pastry is the traditional or classic kind.

“For the traditional and the pain au chocolat, those I don’t mess with. They’re nearly perfect the way they are so you know if someone like your dad comes in and gets that, his expectation should be whatever his memory is,” Pablo said.

“It shouldn’t be Americanized and have chocolate gushing or drizzling out, it should just be the thing that he knows.”

Pablo gets up during the week at 2 a.m. to bake all the pastries, baguettes and whatever else he has planned the afternoon before. Everything that is in the patisserie is made by the chef and team.

Pablo admits that besides the obvious challenges of owning a business, he is challenged with the routine mentality that most all his customers live by.

He tries to maintain the day-to-day baking while creating pastries for special occasions. To him, each pastry is unique.

“[It’s my] favorite style of art,” Pablo said. “It is just existing for this very brief time, people consume it, but then it’s gone. I enjoy that and I’ve sort of had to come to terms with people and their routines.

This type of business is built around routine — your morning coffee ritual, your morning pastry — so when I started [the business] I used to change everything nearly every day.”

Pablo pointed out a man in the café named DJ.

“Sometimes it works and sometimes this gentleman DJ is here, although I don’t have his palmiers which is the one thing he loves, but hopefully people fall in love with something else,” Pablo said.

“It makes more sense to be a studio [‘atelier’]. This way, you make something new, but people like routine.”

This balance proves to be a challenge, but Pablo continues to experiment while adapting to what his customers want.

In the end, though, he has created a community environment.

“I can look over there … and my five-year-old son comes in and wants to bake with me,” Pablo said. “Creating a space where my kids can play is awesome.

Beyond that, having people … and routines, the fact that people include us in a routine is pretty amazing.”