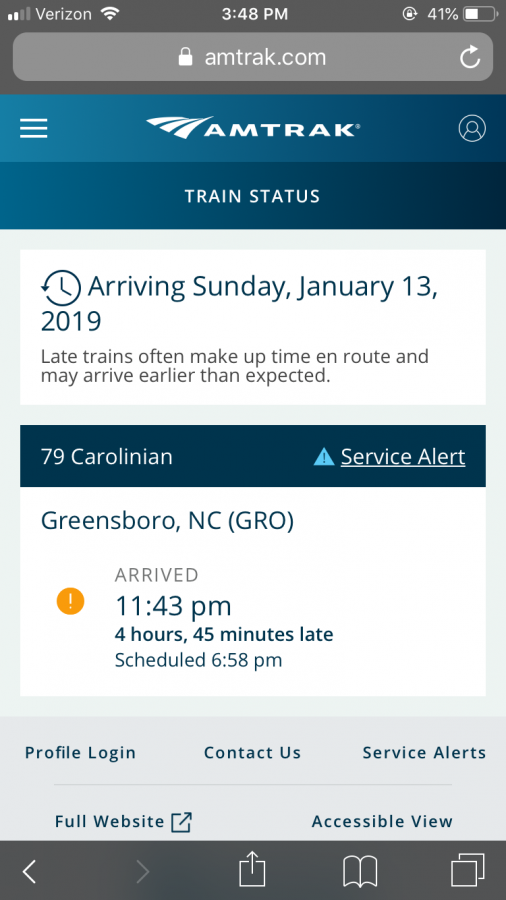 In the small hours of Monday morning, I emerged bleary-eyed and beleaguered from the Amtrak station in Greensboro when my scheduled seven-hour train journey from Washington, D.C. mercifully came to an end after nearly 13 hours. The extreme delay, allegedly caused by a faulty engine that was “having trouble pulling the train forward,” was another grim illustration of how far the American rail network lags behind those of peer countries.

Unfortunately, Amtrak is protected from its own mediocrity because it is a government-backed monopoly. The quasi-public passenger rail corporation is largely sustained by a combination of state and federal subsidies, so market forces aren’t as effective in encouraging Amtrak to improve its reliability or face extinction.

Those who regularly read my columns will note that I almost never see reason in conservative or libertarian politics — however, this is a rare exception. If Amtrak were privatized, it would be forced to sink or swim on its own; if it continued to provide substandard rail service, it would not be able to survive without government subsidies.

Privatization isn’t the solution that I would advocate, though. Subsidization is largely why Amtrak is an affordable means of transportation for many Americans to travel and to see the country without the prohibitive expense of air travel. Moreover, Amtrak inexpensively connects rural communities with metropolitan centers, which combats the isolation that often prolongs the struggles of rural economies.

Although the benefits of continuing to allow Amtrak to be subsidized are clear, that doesn’t mean that Amtrak deserves a “get out of jail free” pass. Indeed, if we’re going to trust the government to perform certain functions, they must perform them well — and Amtrak is a prime example of why some conservatives believe that the government can’t manage a two-car parade.

Transportation infrastructure is a sound, urgent and politically-palatable investment that could be achieved without further exploding the federal deficit. Especially with a combination of better regulation and creative incentives, many transportation projects could pay for themselves.

State governments are already setting the pace in establishing reliable high-speed rail systems. Thanks in part to a $2.55 billion federal economic stimulus grant awarded to the California High-Speed Rail Authority, the state of California is on track to build a high-speed rail system that will transport passengers from San Francisco to Los Angeles in less than three hours. This railway will be the first in the U.S. that is comparable to high-speed trains in other countries such as China, where passengers can zip between Shanghai and Beijing in less than five hours. Similarly, the speedy Eurostar line can travel between Brussels, Paris and London in just two hours. The speed, efficiency, affordability and reliability of foreign rail systems exists in stark relief to my nearly 13-hour trip from Washington, D.C. to Greensboro. Better standards are possible in the U.S., but it would require politicians to challenge Amtrak’s feeble status quo.

The country will be forced to address the poor quality of its rail system in the coming years as we reckon with the catastrophic impacts of climate change — reliance on personally owned automobiles will become increasingly unsustainable, and a good network of trains could be a viable transit alternative. Currently, auto travel in the U.S. is massively subsidized in the sense that the negative environmental externalities of driving, including carbon dioxide emissions, are not fully offset, and many U.S. highways, which cost tens of billions of dollars to maintain, are toll-free. If more tolls are collected and externalities are at least partially offset, perhaps via a carbon tax, revenue could potentially be utilized to shore up Amtrak or to build a new high-speed electric intrastate rail line. Such a policy would put the U.S. rail system on par with those of peer countries and invest in more sustainable long-distance transportation for the future.

Luckily, bringing U.S. railroads into the 21st century is a priority for progressive Democrats. The Green New Deal, which is supported by many Democratic members of the U.S. Congress as well as prospective presidential candidates, emphasizes the importance of both sustainable intra-city mass transit and inter-city railroads. Right now, Amtrak is an embarrassment to American infrastructure, but with the right transit-oriented candidates, future Wake Forest students will not be subjected to a train journey from hell.