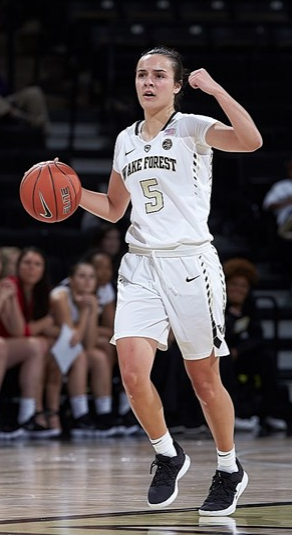 Coming from a family of athletes, Gina Conti is the next star in her familial legacy in collegiate athletics. As a freshman, Conti played in all 30 games, starting 11 times in that span. She averaged 18.6 minutes per game and around 3 points a game. In her freshman campaign, her talent was noted most in her season-best game against Richmond where she came off the bench to score 19 points in 21 minutes. That game also saw her hit three three-pointers in her time on the court.

This year, now a sophomore, Conti is one of the most consistent players for the Deacons. She has played in all 16 games thus far, totaling the most number of minutes of anyone at 569 minutes, averaging around 36 minutes of the 40-minute game. So far, Conti has more than doubled her scoring average per game, now sitting at around 7 points a game. She looks to continue to improve throughout the season against tough ACC opponents.

In high school, Conti was named the Ohio Capital Conference Player of the Year as a junior and consistently made first-team conference, district, state and more. She was ranked the No. 1 player in the state of Ohio and was a consensus top 100 recruit nationally. Playing for both her high school and AAU teams, Conti racked up multiple championships during her high school career.

Samantha Wexler: The team obviously lost some great players after last season and had eight great players come in as well. Can you speak to what it took to develop this year’s team chemistry to continue the success of the program?

Gina Conti: Italy was a great experience and opportunity for us players to have time to get together and learn more about each other. The trip let us bond and develop trust which buildtus to come closer as a team.

SW: How has ACC play gone so far and what are you looking forward to as the season progresses?

GC: We have started ACC play in a bit of a funk; we have been right there, just have not pulled through with the W. I know this team has grit and determination, which makes it exciting to see what the rest of the season has in store for us.

SW: Can you speak on the preparation that normally goes on in a week with multiple games?

GC: We prepare two days before game day for the upcoming opponent. All that goes into this preparation is playing offense and defense against our practice guys, watching game film, learning personal, getting locked in and our minds focused one game at a time.

SW: What newcomers are particularly making a splash this year, and how are they contributing to all sides of the team?

GC: I feel like all the freshman have helped out tremendously. When each of the freshman have stepped on the floor, they have brought something special to the team whether it’s with scoring, rebounding, defense or just being the spark the team needs.

GC: It has been a blessing honestly not only to play with them, but to learn their culture and backgrounds. Everyone is receptive to each other, which is beneficial when we are building as one together.

GC: My favorite Wake Forest basketball memory was when we had the opportunity to play in Italy in front of Elisa’s home crowd.