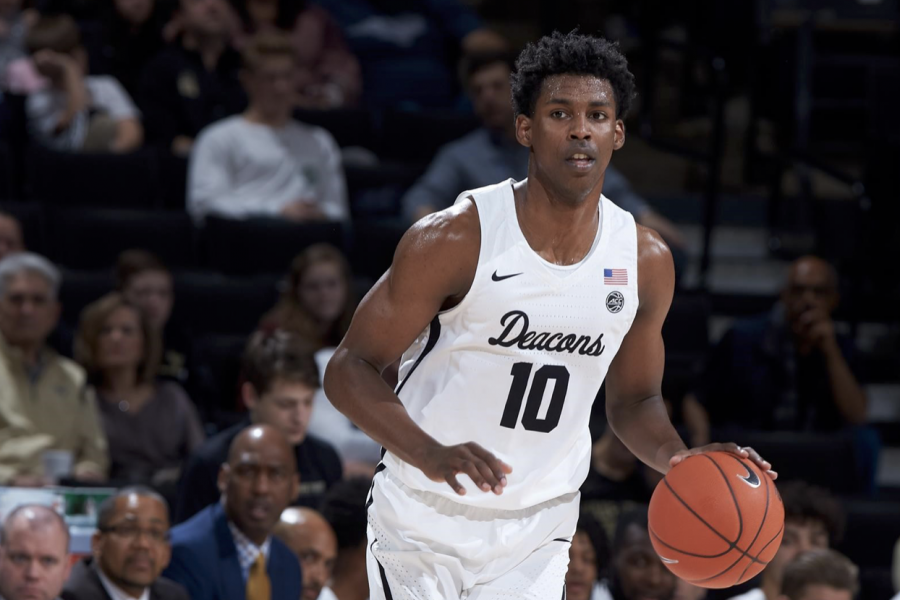 The Men’s Basketball team got their first win in ACC conference play after opening with three straight losses. On Tuesday night, the Demon Deacons defeated a strong NC State team, ranked seventeenth in the country entering the week.

Through the first eight minutes of the game, the score was tied at 14 apiece. Wake then went on 12-2 run to take the lead to double digits. The lead was stretched to 15 by halftime, even without production from behind the arc, as guard Torry Johnson’s shot in the final minute of the half was the only three point field goal for the Deacs in the first half.

As the halftime buzzer rang, forward Isaiah Mucius let out a roar as the Coliseum became as loud as it has been all year. 17 bench points and excellent defense were essential for the Deacs building this halftime lead. Additionally, NC State looked a bit out of sorts offensively, as point guard and second leading scorer Markell Johnson was held out for the game with an injury.

The Deacs stayed hot in the beginning of the second half, taking a 51-29 lead just under three minutes into the half. After a quiet first half, star freshman Jaylen Hoard came out very strong in the second. The first score of the half was courtesy of the Wolfpack, but Hoard responded with a put back off his own miss, a three pointer on the next possession, and an assist to a streaking Sharone Wright Jr. in transition after an NC State turnover.

However, the Wolfpack were not going to go down without a fight. Two crucial consecutive threes by NC State’s Braxton Beverly were the key catalyst in the momentum shift, which cut the lead to 11 with about 12 and a half minutes remaining. As a timeout was called, the Coliseum was loud as it had been at the end of the first half, but this time, it was the traveling State fans making all of the noise.

A 25-5 run over the course of nine minutes eventually cut the lead to two. The run included a six minute scoring drought by the Deacs. The 22 point lead was blown, but Wake never trailed in the second half, as they held off the ferocious comeback to win by four.

Torry Johnson stepped up in the final minutes and hit huge clutch shots for the Deacs. A jumper in the lane with less than 90 seconds remaining gave the Deacs a three point lead. After an NC State free throw cut the lead down to two, Johnson went 2-2 from the stripe to stretch the lead to four with 13 seconds remaining, which was enough to hold on for the win.

The win brought the Deacs to 8-8 on the season, and improved their conference record to 1-3. Up next are two tough road battles, as the Deacs will play #9 Virginia Tech on Saturday and #4 Virginia on Tuesday.