“The Upside” Is A Simple, Sweet Film 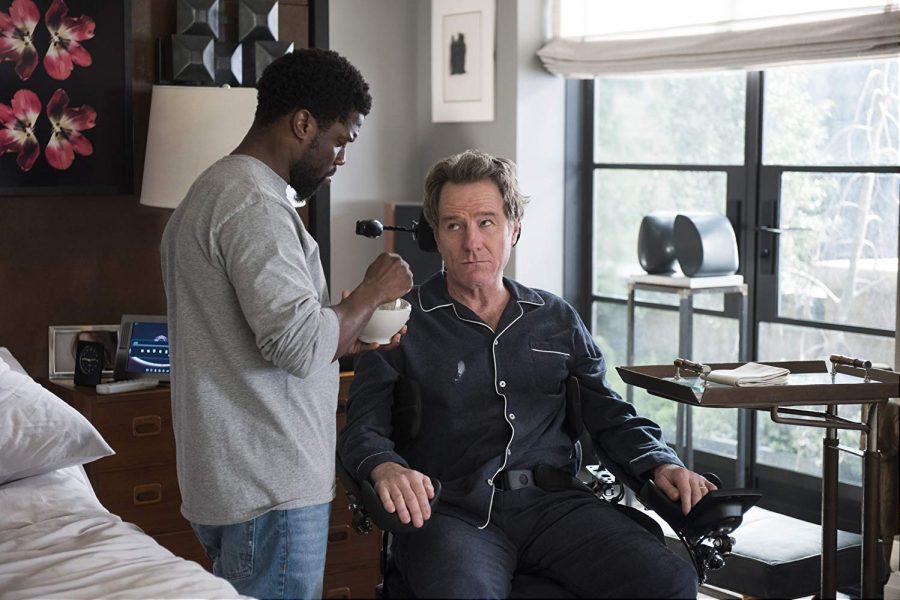 A young man trying to put his past behind him so he can see his son. An old man who suffers at the loss of his wife and his paralysis. A situation where one would think their worlds would never collide.

Starring Bryan Cranston, Kevin Hart and Nicole Kidman, The Upside portrays a friendship between two individuals who are experiencing mental, emotional and physical pain due to a paragliding accident and mental pain due to past mistakes. Phillip, a wealthy older man who is quadriplegic (he can move his neck and mouth), is being forced by his friend and manager of operations, Yvonne, to find a life auxiliary.

With no luck, they soon find Dell, a parolee trying to reconnect with his son and make it up to his wife, who is quite different from every other caretaker. From there they learn to adjust to each other as they become acquaintances.

Every actor does a great job, but Hart and Cranston stand out. Cranston executed this role like he does any other — with grace and sophistication. With Kevin Hart, however, it was different. Not that he didn’t do a good job — he did. But that’s what made him stand out, because this wasn’t his typical comedic film where his acting could hide behind the jokes if he wished.

Unlike those, this one actually had a serious tone that had fewer jokes woven into it. Hart, who seemed to be taking a more dramatic tone, is off to a good start with what appears to be his record for fewest jokes. With that said, there’s still plenty of comedy due to the screenplay by Jon Hartmere. Maybe even too much comedy at times. In a few instances, the storyline gets a little lost, loses focus and falls a little flat. But despite this, it was a beautiful story, fashioned off of the french film Les Intouchables, which was inspired by a true story.

For Neil Burger, the director of The Upside, this was one of his better films. Also the director of Divergent, Burger seemed to have learned to recognize when to keep it simple, except for the opening scene, which was a little cheesy and unnecessary. Its placement and interpretation was Burger’s biggest mistake. However, he did a great job capturing the relationship between Dell and Phillip (Hart’s and Cranston’s characters) as they navigate their new situation with each other.

A story of friendship, overcoming hardship and finding oneself again, The Upside is a good movie. However, if you’re looking for an Oscar-worthy film  to see during the 2019 awards season, this won’t be it, but it’s still worth the ticket price and a trip to the movies for this feel-good flick.