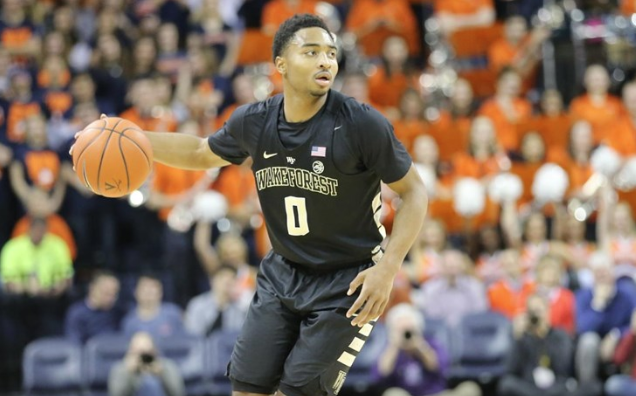 Coming off an impressive rivalry win over NC State, the Men’s Basketball team lost back-to-back road games this week to ACC foes Virginia Tech and Virginia. Both teams are currently ranked in the top 10 of the Associated Press’s poll.

On Saturday, the Deacs faced off against Virginia Tech, who boast one of the most explosive offensive attacks in the country. Tied at 17 nine minutes into the game, the Hokies went on a 14-4 run over the span of the next seven minutes, taking a 10-point lead that they never let slip. The Hokies held at least an eight-point lead the rest of the way, leading to a final score of 87-71.

Junior guard Brandon Childress carried the offensive load, tying his career high with 28 points. He shot an impressive 5-9 from downtown and 9-11 at the free throw line. No other Wake Forest player managed to score in double figures.

Nickeil Alexander-Walker lead the way for the Hokies, scoring 24 points, as part of an offensive attack that included four additional double-digit scorers. The hot-shooting Hokies made 11 of their 26 attempts from behind the three-point line, and their defense stepped up by forcing 16 turnovers.

On Tuesday, the Demon Deacons returned to Virginia to take on the state’s best team. The No.3-ranked UVA Cavaliers boast an elite defense as always, but this year, their offense is almost as dominant.

Coming off their only loss of the season, a two-point road defeat at the hands of Duke, Virginia came out firing on all cylinders, seizing control early with a 25-3 lead 11 minutes into the contest. However, the Deacs displayed tremendous grit the rest of the half, as Childress and freshman Sharone Wright, Jr. each hit two threes in the final five minutes of the half. Their efforts cut the deficit to only 13 points by halftime, injecting much needed life into a game that looked over soon after it was underway.

Nevertheless, the talent and experience of Virginia took over in the second half, and the Deacs failed to make another run. The signature stifling defense and slow-paced offense of the Cavaliers was on full display, leading to a final score of 68-45. Wake Forest had scored at least 63 points in every other game this season.

With the most brutal five-game stretch of the season behind them, the Deacs will look to take advantage of a great opportunity to grab their second conference win of the season on Saturday against 10-7 Boston College.

The Eagles looked very impressive on Sunday in a win over Florida State, yet they still are one of the more beatable teams in the extremely competitive ACC.