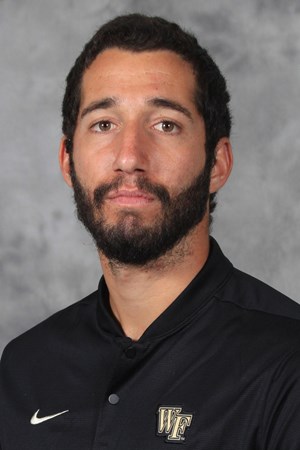 Hailing from Cyprus, Petros Chrysochos quickly made America aware of his presence on the NCAA and ITA level. He is no stranger to competition, training at the Herodotou Tennis Academy in Larnaca and competing alongside teammate Marcos Baghdatis for the Cypriot Davis Cup team prior to coming to Wake Forest. On the Junior ITF Circuit, Chrysochos reached No. 19 in the world and was named the Tennis Europe Under 16 Player of the Year in 2012. He garnered 10 Junior ITF Singles titles and five doubles titles as well as three ITF Pro Futures Circuit singles titles.

As a freshman, Chrysochos immediately made a splash as the ACC Freshman of the Year and the ITA Carolina Region Rookie of the Year. He was a second team All-ACC Selection and an All-American in singles. He finished the season ranked 18th nationally in singles, the highest ranking for a freshman in the country. In his sophomore season, he became the first player in program history to win the ITA All-American Championship. That same season, he was named an ITA Singles All-American for the second time in his career. A first team All-ACC athlete, Chrysochos helped lead the Demon Deacons to their first-ever No. 1 team ranking as well as the program’s first-ever No. 1 overall seed in the NCAA Tournament

As a junior, Chrysochos led the historic Demon Deacon squad in winning both the singles title and team title on the home court in Winston-Salem. After winning the team title, the singles final match came down to Chrysochos and his teammate Borna Gojo. He was named the ACC Scholar-Athlete of the year following his junior campaign, signifying excellence on the court and in the classroom. He was an NCAA Singles All-American and named to both the NCAA Championships All-Tournament Team and First Team All-ACC. To begin his senior year, Chrysochos won the 2018 Oracle ITA National Fall Championships singles title in November of 2018. He looks to take to the court one last time with his teammates this year to defend his title.

Samantha Wexler: Walk me through last year’s NCAA tournament. You were at home and playing with Demon Deacon nation behind you. What was it like to get the victory?

Petros Chrysochos: Last year as a whole was one to remember from beginning to end. Everyone there is to win as a team; it was extremely hard but rewarding as well. I think everyone worked together with the NCAA title in mind. We knew going into it that playing at home is definitely an advantage for us but the majority of teams who host don’t usually win. There was a lot of pressure but it definitely did not phase us. It definitely did not phase me. Great teams thrive in those situations and we did. I don’t think I will ever play with a better crowd cheering than the one during the finals. The fact that the community of Winston-Salem and Wake Forest came together was fascinating. When I realized it was all over, I was extremely relieved and happy to finish the year with a win.

SW: It must have been a little odd to play against your teammate for the national title; what was that like?

PC: Yeah, playing against a friend and teammate in the finals was awkward. Very weird. We asked the NCAA to not play and share the title but they did not accept. To be honest, fair enough, they wanted a winner which is understandable. At the beginning of the match, we were both extremely shaky so the level was not there. As the match progressed the level

got better. The crowd did not know when to cheer which was funny. At the end of the day, the winner did not matter a lot. Since there were no Americans in the final, nobody would get a wild card for the U.S. Open no matter what, so we both played for pride and to represent Wake Forest and finish the year in a dominant fashion.

PC: Being such an international team helps us understand each other a little bit better every day. We all have different values and ideas but share the same goal of winning. There is an understanding that everyone knows what their individual role in the team which makes this team successful.

SW: There has been a very high standard of play under this coaching staff. What in particular does they bring to the program to continue to compete in the ACC?

PC: I’m obviously biased saying that our coaching staff is the best in the country. To me, they are the best and that’s what really matters here. To be honest, the players are usually the ones who get the credit after a win. The recognition and the glory go to the players from an audience point of view. People don’t understand that my job as a player is very easy. In a simplified explanation, I go to school, I study, I practice, I compete and I win. That’s my job. The coaching staff has to worry about everything else around that. Having to deal with so many players, compliance, parents, emails, phone calls, complaints, etc. is sometimes annoying. As players, we don’t have to worry about that. The brains behind this operation are the coaches, and I feel they don’t get enough credit for how much they do.

PC: I have met wonderful people at Wake Forest, and I made friendships that will last a lifetime. My girlfriend has played a vital role in my experience as a Wake Forest student-athlete. She makes my life so much easier and puts it in place when it falls apart. Other than the guys on the team, as a tennis team, we hang out with a lot of soccer players.