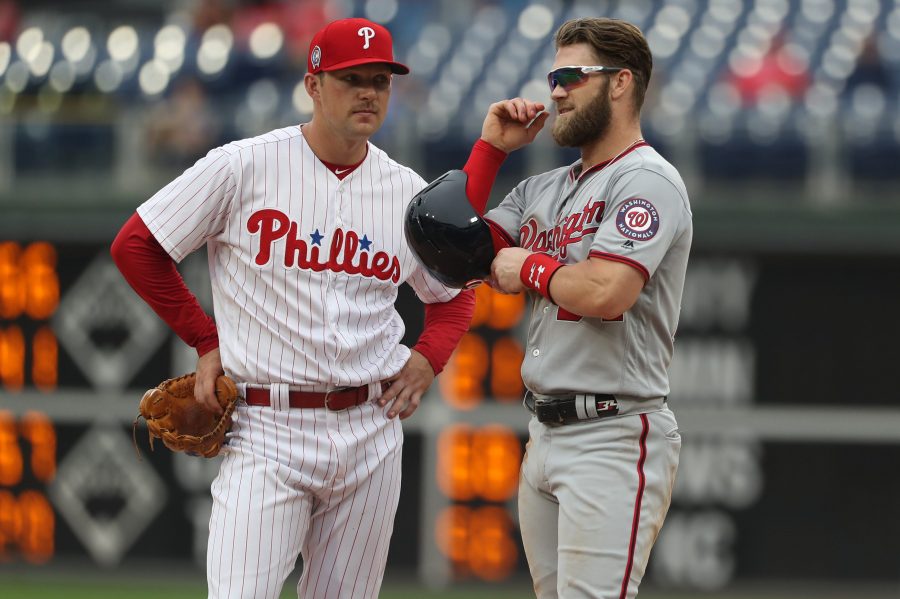 Rhys Hoskins, left, and Bryce Harper are both represented by agent Scott Boras.

Bryce Harper, the Washington Nationals’ star outfielder, is considering a change of scenery and donning a new uniform. The six-time All Star is a free agent after seven years of dominating pitchers and flashing the leather.

Harper came into the league in 2012 as one of the most touted high school prospects ever. Since then, Harper has helped to transform the dismal Washington Nationals organization into a powerhouse. Because of the left-handed sluggers determined playing style and ability to hit any pitch 400 feet, he elevated the Nationals from being the laughingstock of baseball to one of the most respected.

Harper is a flashy player who deviates from the normal lay-low baseball player. Harper loves the spotlight and creating buzz. He takes any chance to get attention from bat flips to on field brawls.

Before being drafted in 2010, sports writers and talent scouts compared Harper to LeBron James for being a once in a generation talent. Their predictions were accurate. Six years later, Harper is still equated to King James as being the top athlete in their respective sport. Harper is a unique talent that fills up highlight reels from towering home runs to stealing home plate.

The Nationals won their first NL East pennant in his rookie season and since then, the team has won the East three more times and has not slipped lower than second place. The problem? Harper’s Nationals have not won a playoff series and he is clearly frustrated. So, the Las Vegas native is weighing his options this offseason and commanding looks from multiple general managers.

The left-handed slugger can expect to become a very wealthy man wherever he goes. He has already been offered a $300 million 10-year deal to re-up with his former franchise. But it seems that is not enough to sway the young slugger as several other organizations are vying for his attention. In the running are the Dodgers, Yankees and Phillies. As of now, the Phillies look to have the edge, as it is reported that Harper bonded with Phillies manager Gabe Kapler. Kapler and the upstart Phillies look to have a bright future with their turnaround season in 2018. Led by a young core comprised of Aaron Nola, Rhys Hoskins and Cy Young winner Jake Arrieta, the Phillies would be poised to become a National League powerhouse with Harper in the outfield.

Harper has Scott Boras, who Forbes named the most influential agent in sports, as his deal maker. Boras negotiated $1.9 billion worth of contracts in 2018, earning himself $105 million in commissions.

With Boras on his side, Harper is likely to get the money he desires, but there is more than cash informing his options. Leaving the Nationals for the Yankees or Dodgers would paint him as a villain following the money. However, the Yankees and Dodgers are stationed in lucrative markets that would boost his celebrity status. Harper also has great chances of winning that coveted championship ring immediately on either the Yankees or Dodgers. Harper might be positioned as the face of either franchise, positioning him next to all-time greats like Derek Jeter and Alex Rodriguez.

Going to rival Philadelphia would enrage Nationals fans, but the Phillies are the perfect fit for Harper, who just need that superstar athlete to make them a World Series contender. If Harper returned to the Nationals, he would be prized for his loyalty, willing to do anything for his first franchise. The problem is the Nationals are old news for Harper.

The key is Harper needs to win. Already one of the greatest baseball players of all time, he can never be a legend without a ring. Harper must decide soon on the best place for his career and to forge his legacy. This is a monumental decision for anyone, especially someone as young as Harper. This career decision will come soon, and we are excited to finally see where Harper lands.