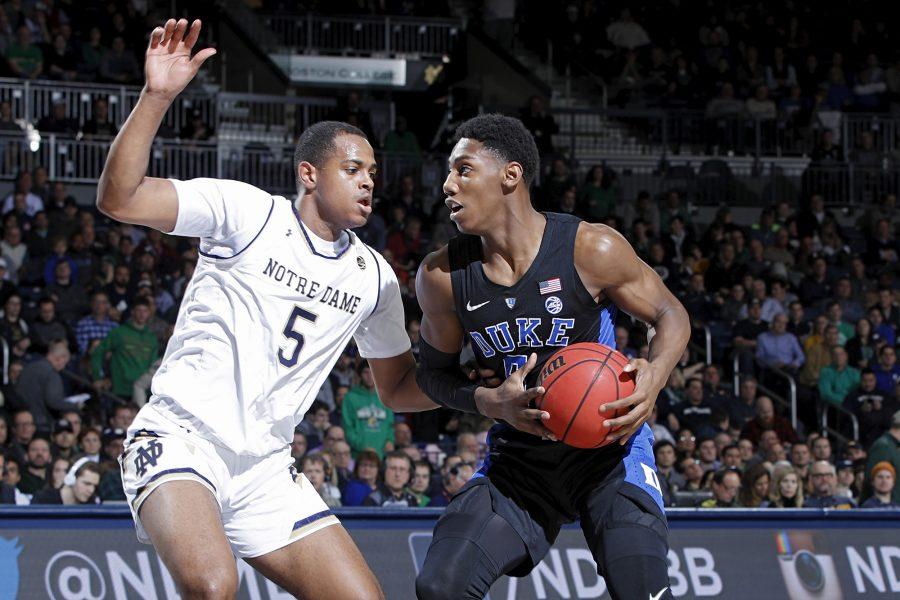 RJ Barrett #5 of the Duke Blue Devils goes to the basket against D.J. Harvey #5 of the Notre Dame Fighting Irish in the second half of the game at Purcell Pavilion on Jan. 28, 2019 in South Bend, Ind. Duke won 83-61. (Joe Robbins/Getty Images/TNS)

After what was a very exciting week in ACC basketball the week prior, this past week did not feature nearly the same level of drama. Practically every game went about as expected, the favorites won, and few games came down to the wire. With that said, there were a number of noteworthy games that deserve looking back upon.

In particular, Louisville continued to show that 2019 will not be a rebuilding year in Chris Mack’s first year as head coach, but instead they intend to compete in a loaded ACC. Last Thursday, Jan. 24, the Cardinals had one of their first big tests, which they handled well by knocking off NC State 84-77 at home. Louisville had a very balanced attack with five players in double figures and seven players with at least nine points. Just two days later, Louisville took on the surprisingly decent Pitt, but handled them easily, disposing of the Panthers 66-51 in a game that was hardly ever close.

NC State was able to avenge its tough loss to Louisville with a miraculous come-from-behind win at home over Clemson on Saturday, Jan. 26. Trailing by six with just over 25 seconds remaining, hope seemed all but lost for the Wolfpack, but Clemson was unable to hit its free throws down the stretch, thus leaving the door open for NC State. Clemson led by one at the line with 7.5 seconds left but missed the free throw, and State drove down with no timeouts when CJ Bryce kicked back out to Braxton Beverly for a 35-foot three-point dagger, which he drilled at the buzzer, giving NC State the 69-67 win.

In another Saturday showdown between two of the ACC’s cellar dwellers, Boston College came from behind to steal one at the LJVM Coliseum against Wake Forest. The Demon Deacons led for much of the game, thanks in large part to freshman Jaylen Hoard’s 22 points and 10 rebounds. The team’s 16 turnovers, however, were what haunted Wake Forest, as they allowed a Boston College team that shot just 41.5 percent overall for the game to stay close. As the Eagles crept back into the game in the final seconds, Ky Bowman drilled a miraculous three as the shot-clock expired to take the 64-61 lead and essentially end the game.

The ACC’s top dogs in Duke and Virginia each had undefeated weeks after up-and-down weeks the week prior. On Saturday, Duke took down Georgia Tech in Atlanta in Trey Jones’ return from his shoulder injury against Syracuse. On Monday, Jan. 28, Duke dominated a struggling Notre Dame team behind another incredible Zion Williamson performance in which he had 26 points, nine rebounds and four assists.

Things got a bit testy for UVA, however, on Tuesday night, Jan. 29 in Raleigh against NC State. This game went back-and-forth all night between these two as neither team was ever able to get any separation. With the game tied at 55 in the final seconds, UVA went to Ty Jerome to try and win it in regulation, but he missed a running floater on the left side which sent the game to overtime. With the game tied in the final minute, though, Jerome found Kyle Guy for a contested corner three to give UVA a 66-65 lead for the victory on the road in Raleigh.

Some of the big games to watch for this week include a UNC-Louisville matchup on Saturday, and a cross town rivalry game between NC State and UNC in Chapel Hill next Tuesday night.