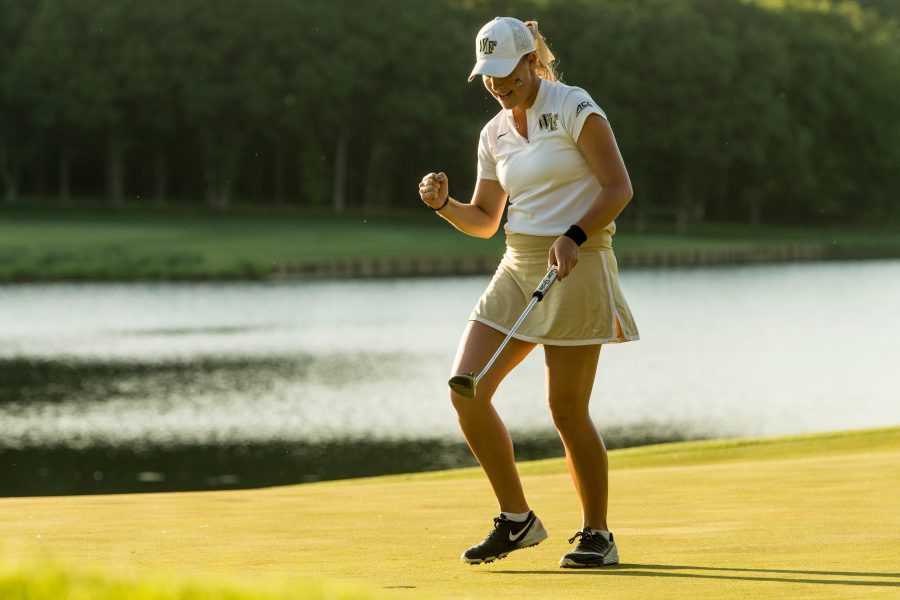 Coming all the way from Colorado, Jennifer Kupcho surprised a few folks in the ACC and continues to do so. They should be very used to Kupcho as a winner.

Since arriving, Kupcho has rewritten the Wake Forest record books, starting with the school freshman record, which she earned with a 73.18 scoring average. In her first season she was named All-ACC, Honorable Mention All-American and T-6th at the NCAA Championship. She was the first player in program history to conclude the NCAA Championship under par, setting herself in the spotlight as one of the best athletes to ever come through Wake Forest.

That play continued as a sophomore, setting school records with a 70.61 scoring average, 12 consecutive rounds under par and 15-under to win the Tar Heel Invitational. She placed runner-up at the NCAA Championship, was named All-ACC and a was consensus first-team All-American by various outlets.

Still, she wanted to taste that sweet victory at NCAAs after watching it slip away from her sophomore year. She got that dream in her junior season, as she won the NCAA title.

This season saw her rewrite her own school record with a 70.60 scoring average, a single-round record of 64, as well as become the First National Player of the Year in program history by winning the 2018 Honda Award. She was named All-ACC, First Team All-American and became the No.1 amateur in the world in July of 2018.

She has one more season that is about to begin and the sky truly is the limit for what Jennifer Kupcho can do in her last rounds in the black and gold.

Regardless, she has made her mark as one of the most successful athletes to ever come through Wake Forest, and she will continue to thrive on the professional circuit as well.

Samantha Wexler: Walk me through the NCAAs in 2017. What was that like?

Jennifer Kupcho: Yeah, I mean the year before it was kind of a tough time but I was able to recover. My assistant was the same both years, and he had walked with me all of the year before, so we kind of got over the whole thing together. Definitely showing up that last day, it was kind of scary. I mean yeah, I was up near the lead, I don’t exactly remember where I was, but I know six holes in I had completely dropped, and I was so out of it and I looked at him and I was like “Ryan, It’s gonna happen again, I’m going to be so close and lose again.” And he was like no stop, don’t think like that, you’re fine, and he just encouraged me. I think one of the main differences was that he had learned from the year before what to do, and then also because my whole team had made it that year, they were all cheering me on and being obnoxiously loud. It made me relaxed because they were laughing, and it made me laugh and I think that just relaxed me and forget about what I’d just done.

SW: You won the Honda Award. What was that experience like?

JK: It was really cool, they actually flew us out to LA with all the other sports who got it too, so I got to meet a lot of other really good athletes and national champions. It was really cool to get to meet the other people and see their mindsets, that was definitely the coolest part.

SW: So it appears as thought you have a career in the LPGA set up after graduation, can you walk me through that?

JK: I had to go to qualifying school, “Q School,” and that was at the beginning of November. I played 8 rounds of golf, which was a lot. I did well enough to get my card, and I had always been planning to just graduate. I’ve always wanted to get the degree, just in case I get injured or something. It’s going to be there after I’m done, it’s not going somewhere, so it was easy to just stay because I don’t really want to leave. It’s college, you’re never going to get that year back.

SW: How will what you learned at Wake help you start your professional career?

JK: Probably time management. Just because it’s such a big thing at Wake, especially with sports.