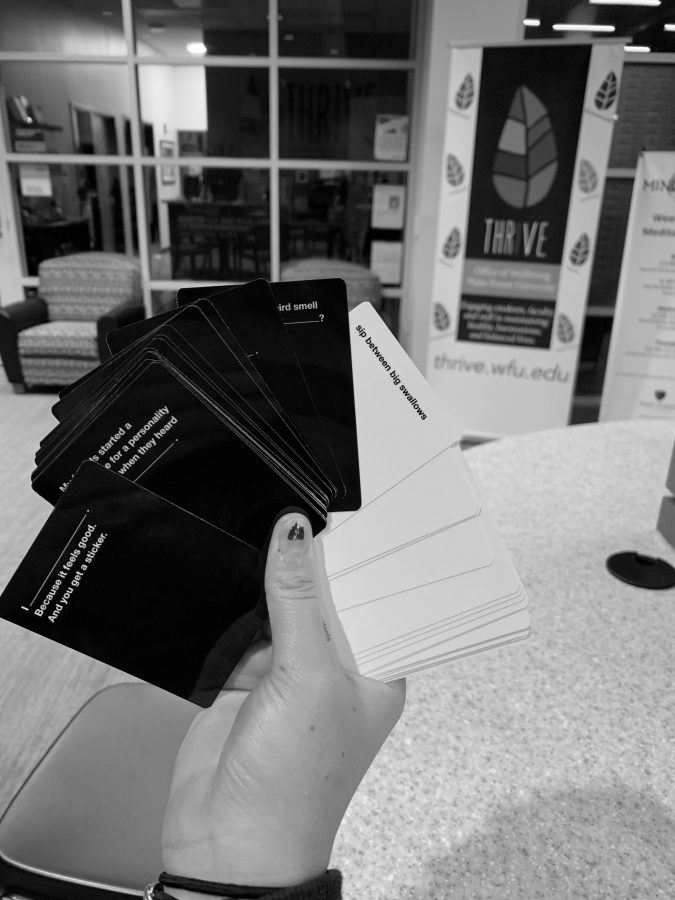 THRIVE, an organization committed to student well-being on campus, has used the popular card game Cards Against Humanity as the template for a new marketing tool to educate students about alcohol misuse. While much of the student response for the campaign has been positive, the campaign struck the wrong chord with English Professor Omaar Hena and a group of his students.

“The game is Cards For Humanity instead of Cards Against Humanity, which works well with our motto Pro Humanitate,” said junior and THRIVE member Alexis Nickl.

Peter Rives, Assistant Director of Wellbeing – Alcohol and Substance Abuse Prevention said that the “Cards for Humanity” campaign is the latest effort by THRIVE to catch the attention of students and create programming that helps prevent ongoing alcohol misuse on campus.

“Cards Against Humanity has brand recognition with our target audience, resonated well with students that assisted with the development of materials, and gave us a way to deliver the Wake Forest statistics in multiple ways :cards, table tents, posters, video message boards,” said Rives.

However, part of the brand recognition of the original Cards Against Humanity among students can be attributed to its inclusion of controversial topics, not entirely different from what this campaign does. Professor Hena and his students expressed that they were disturbed by the campaign’s contents.

The campaign has manifested into the form of posters, interactive decks of cards students can play with their friends, and even slideshows on the TV screens in Benson that boast these controversial statements.

Last week, several students entered the class discussing the poster and how they found it offensive. Though all the posters are different, the specific poster they were discussing said, “My mysterious rash left me wondering if I should ________.” The answer was, “commit to a monogamous relationship.” Hena is currently teaching a course that focuses on a variety of topics, two of them being sexuality and monogamous relationships. As Hena points out, it’s no secret that alcohol abuse or overuse can lead to unprotected sex and faulty judgement. However, he and his students take issue with the fact that they feel the poster shames people who happen to contract Sexually Transmitted Infections (STI), infers STIs won’t happen in a monogamous relationship, suggests monogamy is the only legitimate sexual relationship and ridicules people who have multiple sexual partners.

“Here, raising awareness about substance/alcohol abuse is great, but unfortunately at the expense of those who actually do suffer from an STI and those who reject the mandate to monogamy and all those who support consensual sexual [practices], across the spectrum,” he said.

Hena expressed that in class, his students were somewhat offended by the campaign and found the message “deeply misguided in logic.” Since then, Hena has contacted the Office of Wellbeing, in particular Rives, and has expressed his students’ concerns.

“When I contacted Peter Rives, he said that he was applying ‘Social Norms Theory’ to raise awareness on the harmful effects of drinking and that the card was not about ‘sexual monogamy’ but about a monogamous relationship to alcohol,” said Hena.

“[Social Norms Theory] informs us that we tend to overestimate the degree to which others engage in risky behaviors such as alcohol misuse which leads to us being more likely to engage in these behaviors.,” said Rives. “Research has shown that when people are presented with actual data about the behavior of others that corrects these misperceptions  — in this case, Wake Forest student data regarding drinking behaviors and their consequences — that engagement in these risky behaviors is reduced.”

However, Hena questioned how promoting a monogamous relationship in favor of alcohol is any better than seemingly shaming people who contract STIs. Rives assured Hena and his students that the messaging does not refer to or take a stance on sexual monogamy.

“Of course, in a community this size, difference of perspective is inevitable and beneficial,” said Rives. “We always welcome people to share their perspectives with us and take all feedback very seriously. Our ability to dialogue about these things is what makes Wake Forest great.”

Hena says that Rives eagerly offered his contact to Hena’s students and expressed his willingness to discuss this with any and all of them. He also passed Hena’s feedback along to the Communications and External Relations Department, which designed and vetted the materials along with the Office of Wellbeing and the student focus group members.

“For this campaign, we worked with the Communications and External Relations department and student focus group members to create materials that would be just as intriguing as the past ‘Mindless Drinking Leads to Backwards Thinking’ campaigns but with a new look,” said Rives. “When most people think of alcohol misuse prevention programming I think they expect something that is much more directive and less engaging.”

THRIVE member Emma Matthews expressed that she didn’t want students to be “turned off just because it’s [marketing materials] from THRIVE and Wake Forest.” She described THRIVE’s goal with this campaign as bringing alcohol and drug-related awareness to campus in a fun and interactive way.

Rives believes that the largely positive response from students comes from the “unexpected delivery method” and the fact that the campaign is interactive. Nickl also said that the cards are meant to be funny and interactive for students, who will be entered into a raffle if they post a picture playing with the deck and tag @WFUTHRIVE on social media.

According to Rives, his hope was to introduce an interactive and thought-provoking way to communicate information about alcohol safety and social norms to the campus community. Despite Hena and his students’ concerns, both he and Rives remarked on the importance of promoting alcohol safety and well-being on campus.

“My hope is that this instance could become a productive opportunity for the Office of Wellbeing to use more constructive, nuanced approaches in supporting our students in preventing substance abuse and developing a healthy relationship to drinking and alcohol,” said Hena.