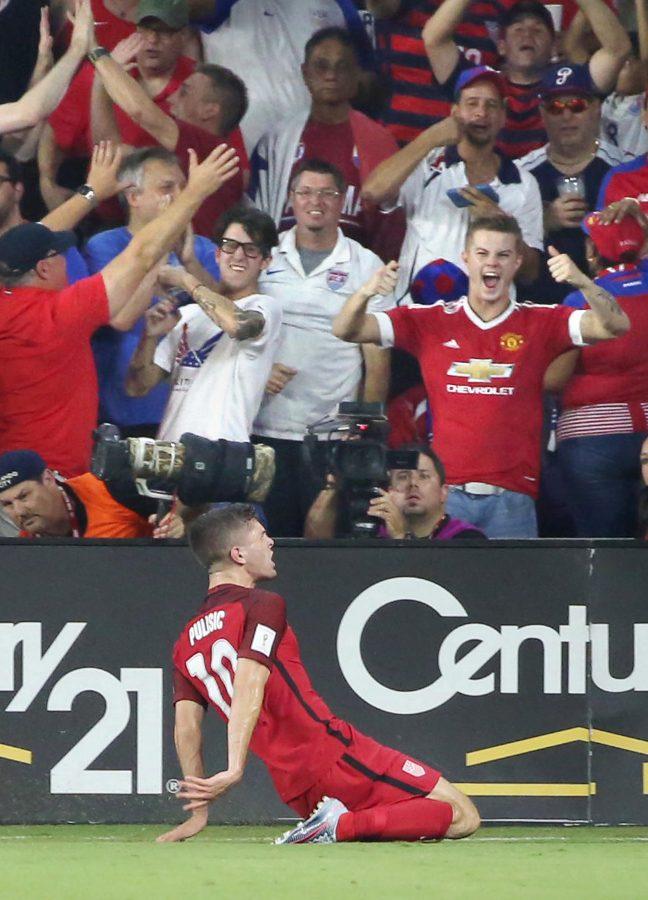 USA player Christian Pulisic (10) celebrates after scoring a goal against Panama during World Cup qualifier match at Orlando City Stadium on Friday, Oct. 6, 2017, in Orlando, Fla. Pulisic was left off the 24-man national team roster for coming friendlies with Brazil and Mexico because of a leg injury. (Stephen M. Dowell/Orlando Sentinel/TNS)

As of Jan. 31, the transfer window is finally closed for the Premier League. Compared to the 2018 winter transfer window that included star names like Pierre-Emerick Aubameyang, Virgil van Dijk and Philippe Coutinho, this one was fairly uneventful. There were only a handful of transfers that made headlines.

The biggest transfer included young American superstar Christian Pulisic, who was bought by Chelsea for 73.1 million dollars from Borussia Dortmund. Unfortunately, the 20-year-old American won’t be able to help his new club compete for the title because he is on a loan contract to Borussia Dortmund for the remainder of the season.

Chelsea also struck a deal for a loan contract with Gonzalo Higuain. Higuain has been reunited with manager Maurizio Sarri who coached him at Napoli several years ago. He thrived under Sarri, which leaves Chelsea fans very excited for the rest for the season.

The reigning MLS Champions, Atlanta United, sold their star midfielder, Miguel Almirón, to Newcastle United. Almirón could be a crucial signing for a Newcastle team fighting against relegation.

Although Liverpool and Manchester City are the clear front runners to win the championship, the race to finish in the top four Champions League spots is incredibly close. Tottenham, Chelsea, Manchester United and Arsenal each have a puncher’s chance at a European slot.

Without Harry Kane and Dele Alli, Tottenham still managed to beat Newcastle with the help of Son Heung-Min. He was the saving grace for the Spurs, maintaining their third place position. Tottenham’s biggest fear has come true because the teams directly behind them are in excellent form while their star players remain on the sidelines.

Chelsea embarrassed Huddersfield this weekend as Gonzalo Higuain and Eden Hazard both scored twice. If Higuain can perform consistently, this Chelsea squad will be able to guarantee a Champions League spot for next year.

The other team that is fighting for the fourth Champions League position is Manchester United, who have not lost a match since Dec. 16. David De Gea, Paul Pogba and Marcus Rashford have been in amazing form since Ole Gunnar Solskjaer took over as the manager. Pogba has cemented his spot as a leader in this squad, racking up six goals and five assists under Ole Gunnar Solskjaer.

Manchester City took advantage of this opportunity with a win against Arsenal. With a Sergio Aguero hat trick, Manchester City is now one win back from Liverpool. A win in the Wednesday match against Everton would give City the first place spot due to a +5 goal differential. It is likely that Sergio Aguero will not start against Everton because he needs to be ready for the Saturday match against Chelsea.