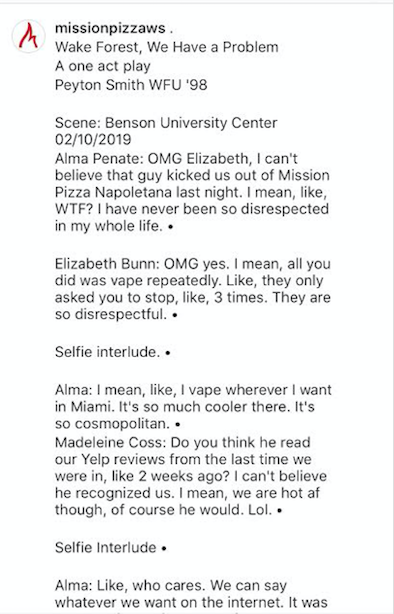 A controversial Instagram post involving a group of Wake Forest students and the staff of popular downtown restaurant Mission Pizza Napoletana made its way onto the phone screens of many students and staff on the night of Sunday, Feb. 10. However, the feud between owner Peyton Smith and the group of girls had apparently been going on since Jan. 26.

Juniors Alma Penate, Elizabeth Bunn and Madeleine Coss were dissatisfied with their service at the restaurant on Jan. 26, and they took to Yelp, a popular online review forum powered through crowd-sourcing, to express their disappointment.

Despite what they described as contentious interactions with the wait staff and Smith that they highlighted in their Yelp reviews, the girls decided to give the restaurant another chance and returned Feb. 9 with three other Wake Forest students. After a second bad experience that night, junior Candelaria Penate posted a Yelp review as well.

According to Candelaria Penate’s Feb. 10 Yelp review, the Feb. 9 meal ended with Smith allegedly telling them to “get lost” in front of everyone else at the restaurant. Candelaria Penate’s post also described that he supposedly took a picture of the entire party, insulted the party and obtained their full names through the credit cards they used to pay for their meal. She stated in her review that she did not post a Yelp review after the first experience at the restaurant because she believed it to be a misunderstanding, but after the second visit, she said her thoughts changed.

On Sunday night, Smith took to Instagram and posted a slideshow of the different Yelp reviews Alma Penate, Bunn and Coss posted, as he has done with other reviews before on the business’s account, along with a meme. He also tagged the Instagram handles of the university and President Nathan Hatch in the caption. In the caption, Smith created a dialogue, which he titled a “one-act play,” about a conversation taking place between Alma Penate, Bunn and Coss after their meal. He attributed the caption to himself, citing the fact that he is a Wake Forest alumnus.

The Mission Pizza Instagram account commented, “I made an error in tagging 3 people who were not directly involved, only part of the group. I offer my sincere apologies, I have amended the post to eliminate their info.” After doing that, the three other Wake Forest student’s Instagram handles were removed from the caption, but Bunn, Penate, and Coss’s accounts remained tagged, as did the two Wake Forest accounts.

Smith, who graduated in 1998, suggested that the girls’ behavior was obnoxious, privileged and irrational in the caption of the Instagram post. In her Yelp review, which was written after the publication of Mission Pizza’s Instagram post, Candelaria Penate wrote that Smith tagged her sister by her full name and made up that her sister vapes and is from Miami, when they are actually Colombian.

“My sister does not own a Juul or vape and was not engaging in such actions and instead he uses slander against her,” said Candelaria Penate in the Yelp review. “I will admit someone else in the party was vaping, and I did not find it appropriate, but it is not okay for him to insult my sister not knowing whether she was or wasn’t doing that.”

In the fictitious dialogue, he wrote that the character of junior Alma Penate called Smith a “loser from Winston-Salem” and the character of junior Madeleine Coss said, “Do you think he read our Yelp reviews from the last time we were in, like two weeks ago? I can’t believe he recognized us. I mean, we are hot af though, so of course he would. Lol.” Bunn was also mentioned in the dialogue.

The post quickly went viral within the campus community. Many accounts contributed their thoughts to the post through the comments section, including the accounts of Wake Forest’s Subway, Moe’s and Zick’s.

“If I had to describe the people who work here in three words, I would say they are unprofessional, disrespectful, and blatantly rude,” said Alma Penate in her Yelp review after the group’s first encounter at the restaurant on Jan. 26.

According to the review, the party was frustrated that the restaurant was seating other groups who waited less time than them. When they inquired with the host, Alma Penate said the staff mocked them rather than apologizing.

“We thought that talking to the manager would help since we wanted to voice our opinions about the uncomfortable and impolite experience we had just had,” said Alma Penate in her review. “But after talking to him, we realized he actually couldn’t have cared less about us. He didn’t even stop what he was doing to talk to us. This is the most disrespect I have ever received.”

Her review ended with “Do not eat at this restaurant.”

Smith directly responded to some of the reviews posted on Yelp. While he said he couldn’t speak to their interactions with the wait staff, he stood behind the character of his employees and insisted he listened to the girls’ concerns. In response to Alma Penate, he said, “Contrary to the outrage you express at 50mbps, when I greeted you (while literally spinning a pizza in a raging inferno — so yes, I didn’t stop what I was doing), instead of expressing yourself as adamantly as you do here, you literally turned away.”

Smith continued to defend his behavior in his replies to the posts.

“Upon listening, I apologized for your experience and any errors that were made, stated that I regretted that you were overlooked, stated that I would address it with my staff, and had you seated within two minutes of our conversation,” said Smith in response to the post. “About 10 minutes later, I approached your table, apologized again, stated that I appreciated you coming in and sticking around, and encouraged you to enjoy your meal.”

Smith also said in his Yelp reply that despite the party not offering him a suggestion on how to fix the issue, he comped a significant portion of the bill and offered a final apology.

Smith also accused the group of libel in his Yelp reply, claiming that they made a clear effort to misrepresent their overall experiences and intentionally tried to harm his business.

Bunn, Alma Penate, Candelaria Penate and Coss declined to comment on the issue.

“Per my post Sunday, simply put, I was a jerk,” he said. “I am sorry to damage the goodwill we have enjoyed from the WFU community with my rude behavior. More so, I am sorry to the individuals and groups I offended.”

Smith also posted a similar statement on the Mission Pizza Instagram page after removing the original post from Sunday.

“Unfortunately, good pizza doesn’t make you a good person, and if you are comfortable with the online harassment you have carried out, that speaks for your character,” said Candelaria Penate in her review.

Although the Mission Pizza Instagram post was ultimately deleted, the dispute is continuing to be prevalent in conversation around campus.

Editor’s Note: The original version of the article incorrectly listed the date of the dinner at which the three other girls were present. They were not at the Jan. 26 dinner, but at the Feb. 9 dinner.