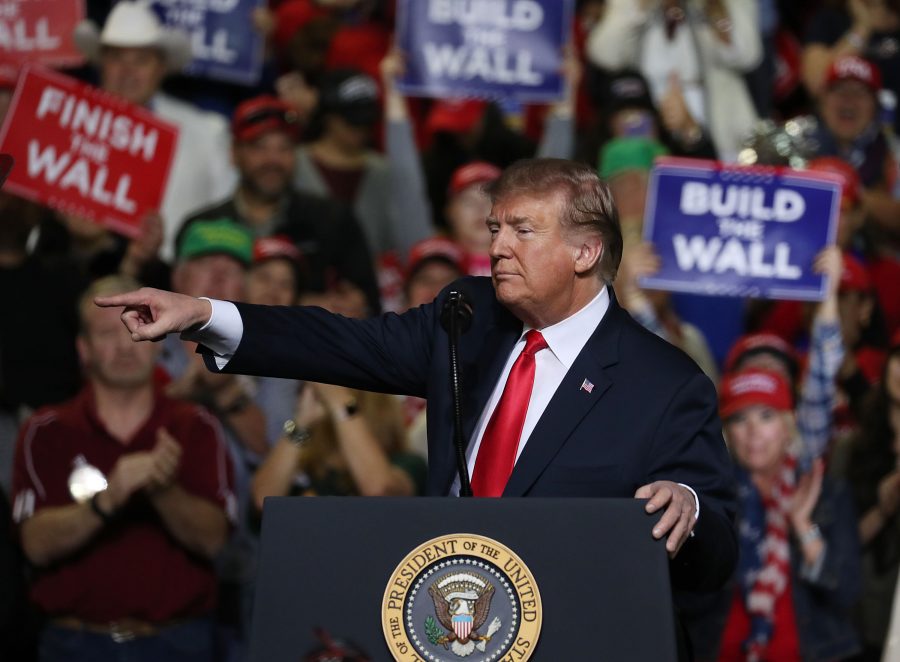 U.S. President Donald Trump speaks during a rally at the El Paso County Coliseum on Feb. 11, 2019 in El Paso, Texas. Trump continues his campaign for a wall to be built along the border as the Democrats in Congress are asking for other border security measures. (Joe Raedle/Getty Images/TNS)

I just filed my taxes, and uh, there’s a problem here. Not a little problem like, “Damn I forgot to let out my dog before I left for school so now there’s probably poop in my living room,” but a big problem as in, “I’m royally f–ked, what’s really going on here?”

Each year since I was 16 years old, I received a tax refund. Being a poor student who’s had to support herself since I first started working, I tried to be practical with money even as a teenager: save some, pay my phone bill and pay for my speech and debate tournaments.

Now as an adult who has rent, car payments, groceries, utilities, hospital bills, credit card bills and future student loan payments, I need a tax refund more than ever to help curtail those costs that often seem overwhelming to deal with in addition to being a full-time student. Not only did I not get a refund this year, I owe the federal and state government roughly $2,300. I don’t even remotely have that type of money laying around.

That’s something that many people in my circumstances are facing now. Because of the new tax law, I didn’t fit the criteria to write off my hospital bills or claim an educational tax credit. To add insult to injury, the new tax law prohibited me from adjusting my gross annual income because my job reported more money than I made as a waitress because they didn’t account for the money that I tip out.

The kicker in all of this? With the exact same number I made, if I would’ve had any dependents, I would’ve received not only the amount of money that I owe, but more. I understand that having dependents is an ongoing financial cost, but I have costs too that can be burdensome and overwhelming. Why do I have to be somebody’s baby mama or be filthy rich to get a refund or tax break now with this new law?

To conservative lawmakers, congratulations. You proudly created a law that makes poor people like me, who work hard for the things that they do have while trying to better themselves, poorer so rich people can keep more money in their pockets. You are not “America First” if the only people you look out for in your policy making are the ones in the top tax brackets.

To the rich people who are celebrating their tax “victory,” congratulations, you are some selfish human beings. That $2,300 that I owe may be chump change to you, but is literally devastating and anxiety-inducing to me.

To Trump voters who are feeling the same effects that I am this tax season and are just now expressing outrage towards him, congratulations, you all are also some selfish human beings. You overlooked Trump ripping families apart at the border, continuously lying to the public as a pastime and exhibiting other unethical and immoral actions, but only get upset with him when your money gets affected? Interesting.

I have to go now. I’m at my word maximum and I need to go donate plasma to go towards paying my taxes. Thanks, Trump.