Djokovic Soars In A Triumphant Return 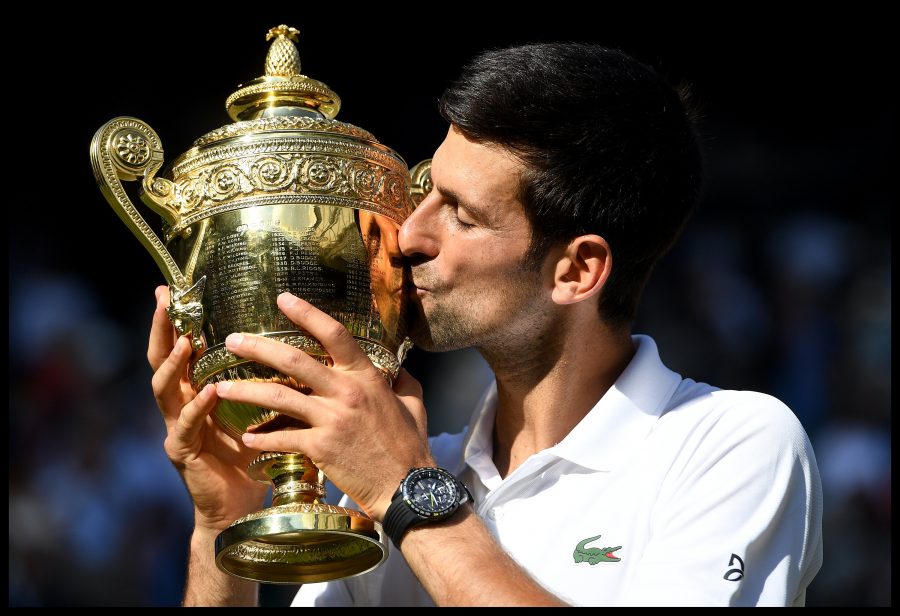 Novak Djokovic of Serbia celebrates with the trophy after winning his fourth Wimbledon by beating Kevin Anderson in the Men's Final on Centre court on Day Thirteen of the Wimbledon Tennis Championships on Sunday, July 15, 2018 in London, England. (Andrew Parsons/i-Images/Zuma Press/TNS)

What’s the state of ATP Tennis? As the collection of consummate professionals, the historic, quad-threat generation that will walk to their apportioned seat in the tennis Hall of Fame, with all of the aplomb of a deity approaching the throne, slowly fades into the tawny horizon, evincing tears and gratitude from us all, who will emerge as the next best thing? Right now, that’s an impertinent question, because Novak Djokovic, one of those four athletes who changed the game of tennis, found some source of reserves and punished all those who thought the quarry was all out. In shocking fashion, tennis now has a born-again No. 1.

In a transcendent spate of about a year and a half back in 2014, where Djokovic looked as if his limbs were as pliable as putty, and his sibilant quickness traced unconscionable shapes across every court, when it seemed that no player except Djokovic would win anything ever, the world No. 1 staggered and then fell. Icarus chuckled and the tennis world was stupefied.

A mediocre couple of seasons followed, and tennis culture came close to purging the still-young Djokovic, relegating him to the background because of injury, domestic strife and domestic joy. Another great, potentially the greatest, lost for incomprehensible reasons. To say the tennis community was traumatized, both from Djokovic’s relentless rise and indomitable reign and his swift, nonsensical skid, would be accurate. His time at the top was quite literally bulletproof. Djokovic was the mayhem-like-me guy from Allstate, thinking of every possible angle of destruction, letting you know he was going to do it, and then executing it with comic perfection. Even when Roger Federer was on top, that one-handed whip of a backhand could reliably shank into the crowd or fly into a lineman. With Djokovic, there was never an inkling of doubt in the audience, nor, it seemed, a glint of hope in the opponent. He was omniscient and omnipotent, unbreakable and unbeatable. And then he was struggling to beat second-rounders with backwards caps.

But now where are we, in 2019, on the ATP World Tour? It seems we’re back under Serbian authoritarianism, and I couldn’t be happier. After a rousing Australian Open victory in straight-sets over Rafael Nadal, Djokovic looks to be back in not rare form but his form. One need only to watch the highlights of the Australian Open final to comprehend the impenetrable aegis of Djokovic’s present game. His two-handers are screaming down the line, his serve has the precision of an astronomical clock and his movement is as sprawling as the Irish countryside. Even Nadal, the scampering Spaniard whose torque and toughness are not to be questioned, simply could not track down the singed felt Djokovic was launching into the hinterlands of playable court. By the end of the match, it was total capitulation. The Djokovic of fait accompli victories had returned and the tennis community — players, coaches, fans — had no choice but to recognize that now anyone who takes a shot at the king will probably miss. Welcome back, Novak. Quiet desperation never did suit you.