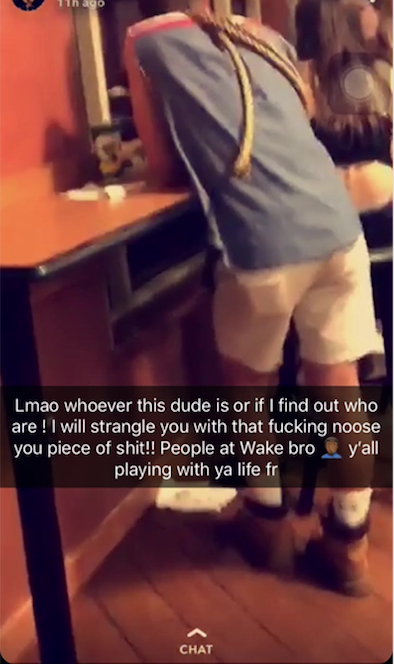 On Saturday, Feb. 9, students began to circulate a photograph that depicted an unidentified male student with a rope draped across his back and shoulder, which many students interpreted to be a noose.

As some interpreted the rope to be a symbol of historical racist violence, a Bias Incident Report (BIR) was subsequently filed. The official Bias Incident group concluded that the incident was a misunderstanding.

“The student in question was impersonating a cowboy by wearing a Western-style shirt with part of an American flag on it and a lasso across his chest and shoulder,” said José Villalba, vice president of Diversity and Inclusion and chief diversity officer, in an email to the Old Gold & Black.

However, sophomores Miles Middleton and Fadi Narouz, among others, said they understood the photo to be an individual wearing a noose around his neck. Middleton, who saw a screenshot of “Becca’s” photo on another student’s Snapchat story, shared the image with the Old Gold & Black.

The caption on the photo read: “Lmao whoever this dude is or if I find out who are ! I will strangle you with that f**king noose you piece of sh*t!! People at Wake bro, y’all playing with life fr.”

According to Villalba, the incident was submitted through the Bias Incident Reporting system and an investigation of available evidence followed. The BIR group examined the images submitted with the original report and additional images received by “people directly involved.” Villalba also specified that the photos “offered multiple views, angles and perspectives.”

“The BIR Group takes all reports of racial harassment and discrimination very, very seriously and where appropriate, refers matters to systems of accountability for disciplinary action,” said Villalba.

However, Villalba was unable to provide any additional or more specific information due to the confidential nature of the Bias Incident Reporting system.

Although the Bias Report produced a response highlighting that the incident was a misunderstanding, both Narouz and Middleton expressed reservations about the conclusion achieved.

“From my initial look at the photo, it looks like a noose, and I think when you see the picture, it portrays the idea of being a noose,” said Middleton. “I will just say that at the end of the day, if they concluded that it wasn’t a noose, then I will take them on their word. But I will acknowledge I have my own set of opinions about how the campus should be dealing with these types of things in a deeper manner.”

While the Old Gold & Black was able to confirm the conclusion of the BIR group’s review process, the content used to reach that decision was not made available.

Middleton commented that the private nature of the BIR system perpetuates an unproductive dialogue about race relations on campus.

“I will say that when there is photographic evidence for something, and students are curious about what that particular item is, there has to be some type of email that goes to students to let them know we are investigating this,” said Middleton. “So, while it might not be a noose to the administration, students are still going to question whether it was a noose because they don’t know that this investigation was going on and that they concluded their point on that basis [or] how. I just need to know how. That’s why I’m a little frustrated by how things were conducted, and I don’t like the secretive nature of how they conduct the [BIR review process].”

Narouz also commented on both the nature of discourse relating to race issues on campus and the productivity of the BIR in facilitating this dialogue.

“Every time it’s the same thing: [a race-related incident] is condemned, it’s shamed, it’s shunned and literally after everyone leaves, it’s back to the same old routine,” Narouz said. “Nothing changes, you know? And the fact that the Bias Report says, oh you know, ‘this wasn’t [a noose],’ like there’s no way of us knowing why, and that’s how it is. It sort of just puts you back in your place, like you can’t do much about anything wrong that happens here.”

Although the conclusion was released, Villalba said that the BIR group will still be in contact with those involved.

“We are continuing to engage with all of the students involved, with the hopes of clarifying the experiences of each individual and providing ongoing support to them, as needed,” Villalba said.

After the Student Government General Assembly on Feb. 12, it was announced that Student Government, along with several academic and administrative offices, will be hosting a Community Forum focused on creating an “Inclusive Climate” on campus. The event, which spawned from both the discovery of images of blackface in the Howler and the dialogue opened about contemporary race-related issues on campus, will be held on Thursday, Feb. 21 at 6 p.m. in Benson 401.