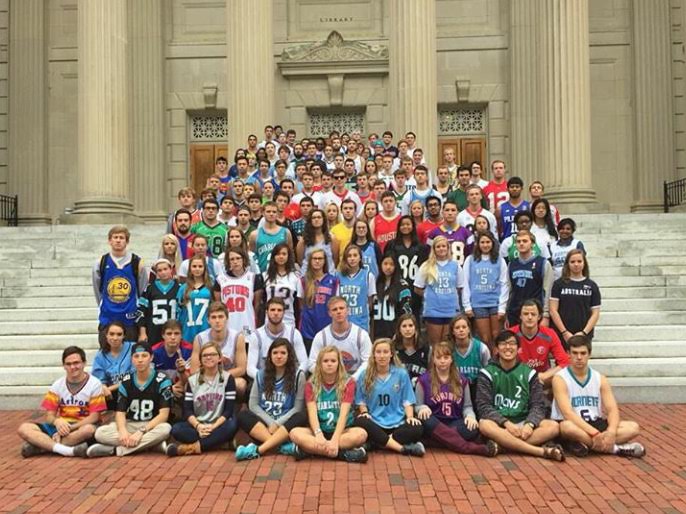 Most college students don’t jump out of bed ecstatic for what Thursday morning has to offer, and instead trudge half asleep to class.

A new movement on the University of North Carolina at Chapel Hill’s campus spearheaded by juniors Chandler Goodson, Nick Cebollero, LJ Mendoza, Patrick Pasquariello and Jon Alliss may be changing that — and it could spread to Wake Forest.

These five friends created the campus-wide event now known as Jersday, where students meet in front of UNC’s Wilson Library every Thursday morning at 10:50 a.m. donning their favorite sports jerseys. All participants pose together for a group photo, where an array of sports jerseys are on full display.

From the first Thursday of the school year to Oct. 8, the group has seen substantial growth in the number of weekly participants, as figures have skyrocketed from the initial lone five to close to 150 of their peers, largely thanks to the power of social media.

“It honestly wouldn’t be possible without social media,” Mendoza said. “Twitter and Facebook have been crucial in our growth.We are reaching the very ends of our social circles. Honestly, people I never would have met in my four years, I now interact with them weekly.”

The ends of their social circles is exactly what the group is after.

Looking to find something to unite people on campus and bring them together in a fun and fresh way, they found a common passion among themselves in wearing both new and old school sports jerseys, and promoted the event on their Twitter and Facebook pages.

High school, collegiate and professional football, basketball, baseball, soccer and hockey jerseys have been worn, and while a sea of Carolina blue tends to dominate most weeks’ photos, some obscure and rare jerseys have turned up. These range  from the red and white checkerboard pattern on the Croatian National Soccer Team shirt to a purple No. 15 Toronto Raptors Vince Carter throwback.

“We all like jerseys and like to hang out with people, so we decided this would be a cool way to do that,” Goodson said. “We wanted to build a community of people who also enjoyed those things.”

Creating a community of people on a college campus has become easier in recent years with the increasing number of social media outlets now available for students on their smartphones and computers.

People are able to connect in new ways with peers they may not have met otherwise.

With students involved in so many extra-curriculars and often times isolated from each other by their respective groups or communities, Wake Forest could be the next college to introduce the Jersday tradition.

No real community currently exists on Wake Forest’s campus that brings students of different backgrounds, Greek life organizations, and areas of study together in the name of fun.

“It’s a marvelous way to unite students of Wake Forest,” junior and Demon Deacon mascot Will Hardy said. “However, we must not forget our true identity as Demon Deacons.”

Some students at Wake may label the movement as “silly,” like UNC junior Molly Hair.

Jersday’s aspect of community building is also attractive, as it could mean prospective friendships and new connections.

Others may voice stronger opposition, like Twitter user @thbl_OVO_unt, who wrote, “Miss the days when you could wear a fresh jersey without being a part of some hubristic cult smh #jersday #joke.” A number of Wake Forest students like Hardy harbor strong school spirit and love to cheer on the Deacs.

“I think it would be fun,” said Wake Forest sophomore Sarah York. “You’d be able to see what team everyone supports, and [it’s] a fun way to unify sports lovers.”