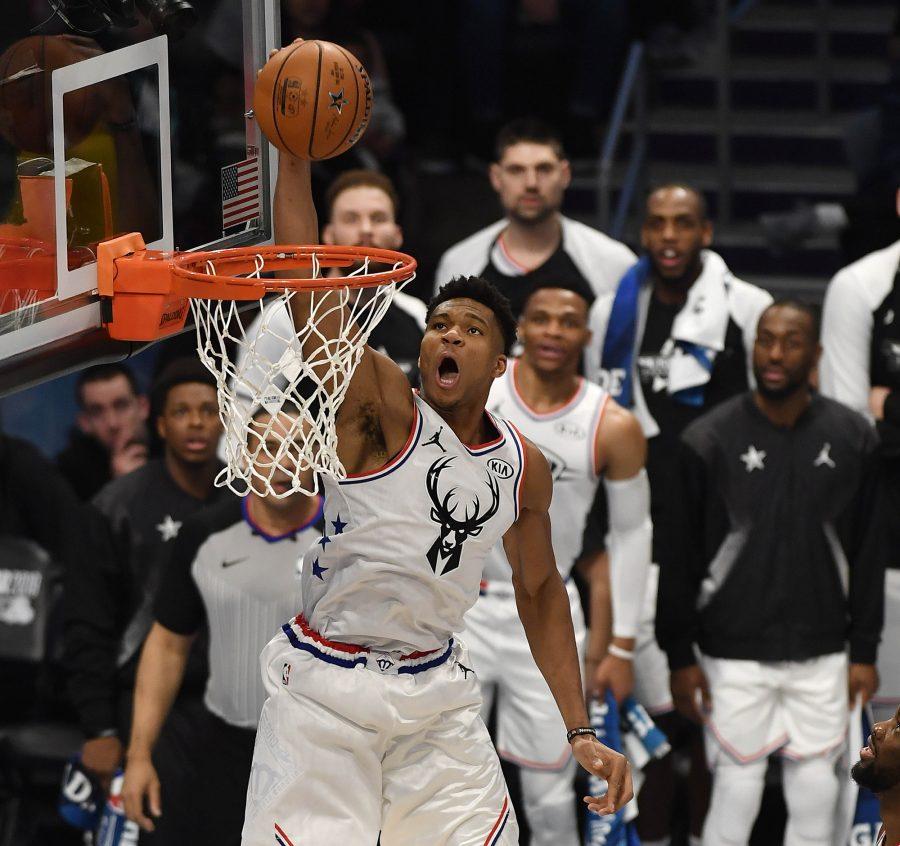 Team Giannis' Giannis Antetokounmpo, of the Milwaukee Bucks goes up for a dunk during the first half in the 2019 NBA All-Star 2019 game on Sunday, February 17, 2019 at Spectrum Center in Charlotte, N.C. (David T. Foster III/Charlotte Observer/TNS)

When the 2019 Charlotte NBA All-Star Game seemed to lose competitiveness again as Team Giannis was up by 20 points in the first half, Team LeBron bounced back in the third quarter.

“We just didn’t want to lose,” said Kevin Durant from Team LeBron during an interview with ESPN’s Rachel Nichols after the game. “We know we had a lot of talent over there that can do multiple things. We just wanted to turn it up a bit on the defensive side.”

The comeback reflected the competition in such an entertaining game among the players. It was the second year since the NBA changed the rule of All-Star Game to raise the competition level, and the change seemed to make impacts.

The players with the most votes from each conference would be the captains of each team, and they would draft the players from all the All-Star candidates. Under this rule, players would hopefully compete among themselves instead of purely playing for entertainment.

The game started with exchanging 3-point shots and alley-oop dunks. The Eastern Conference captain Giannis Antetokounmpo continued his game style with several fancy dunks in the first quarter, and for the whole quarter he made all of his eight shots.

Giannis’ teammate from the Bucks, Khris Middleton, was hot from behind the 3-point line in his All-Star debut. He made four 3-pointers in a row, helping the team lead by 16 points towards the end of first quarter.

Forty-year-old veteran Dirk Nowitzki showed off a bit in his potentially last All-Star Game of his career. He made three deep threes in the game, and the crowd loved seeing him on court as everyone cheered so loud when he had the ball.

The lob from veteran Dwyane Wade to his former teammate LeBron James marked the comeback of Team LeBron in the second half. His last All-Star Game as well, Wade said before the game that one of his biggest wishes was to throw the lob to his best friend James again — and he realized the wish, as he threw a perfect lob off the rebound followed by James’ two-hand dunk.

Former teammates on the Thunder, Durant and James Harden kept making 3-pointers in the second half, helping the team to come back in the match. In the last quarter, Kawhi Leonard made three 3-point shots for Team LeBron to increase the lead to 10 points.