NBA Draft: Who’s The Next LeBron? 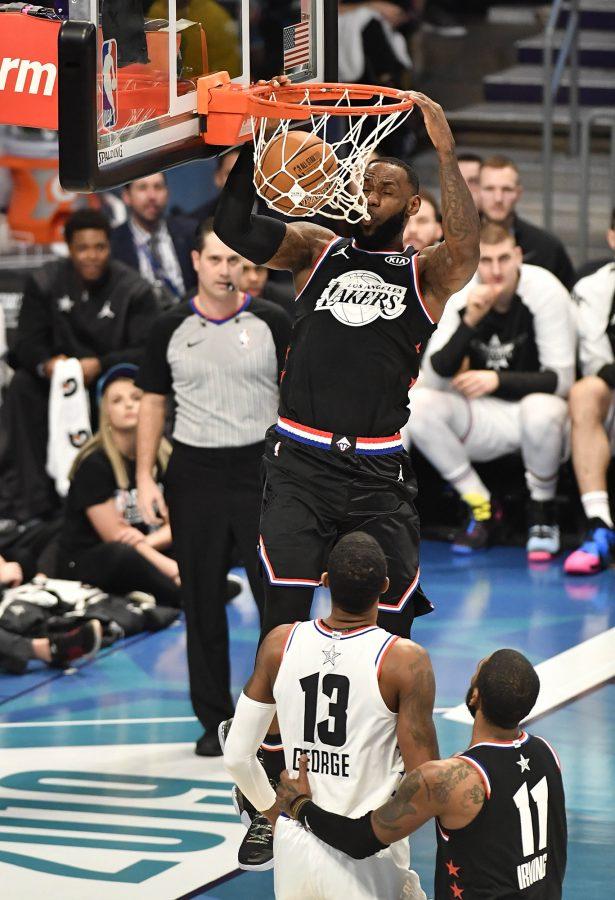 Team LeBron's LeBron James, of the Los Angeles Lakers, goes up for a dunk against Team Giannis' Paul George, of the Oklahoma City Thunder, during the second half of the 2019 NBA All-Star 2019 game at Spectrum Center in Charlotte, N.C. on Sunday, February 17, 2019. (David T. Foster III/Charlotte Observer/TNS)

LeBron James has played in the NBA since 2003, and after almost 16 years, it’s hard to imagine a time without him in the league. The reality of the situation is that LeBron is 34 years old. His second-and-third highest minutes per game (MPG) averages were when he was 32 and 33 years old. Those minutes were 37.8 MPG and 36.9 MPG, respectively. But in the 2016-2017 and 2017-2018 seasons, LeBron carried the Cleveland Cavaliers out of the Eastern Conference and to the Finals by the skin of his teeth. The 2017-2018 playoffs very much highlighted the integral role LeBron had for the Cavs. Despite what the Cavs’ sweep of the Toronto Raptors in the 2017-2018 Eastern Conference Semifinals may suggest, it was not an easy road for LeBron. In the first round of those 2017-2018 playoffs, LeBron and the Cavs faced an up-and-coming Pacers team led by new star Victor Oladipo. The Cavs, previous NBA Finals contenders, were taken to seven games by a Pacers team that had been a seventh seed the year before. In the Eastern Conference Finals, the Celtics also took the Cavs to a seven-game series. The year prior, the Cavs had dominated the Celtics easily in a gentleman’s sweep.

All this toil in the last few years and the longevity of Lebron’s career leads many NBA fans eyeballing future NBA Draft prospects. Some fans look to players as young as high schoolers in an effort to find the next LeBron. Some of these players are those like Zion Williamson of the Duke Blue Devils, Deandre Ayton of the Phoenix Suns when he was entering the draft and current NBA rookie Luka Doncic. All of these players have had enormous expectations placed upon them.

During Zion Williamson’s last year in high school, his dunk highlight mixtapes were exploding over the internet. The hype surrounding his college career is perhaps the biggest in decades. Current NBA rookie Luka Doncic, whom many herald as the next coming of Lebron, is another example. With his playmaking knowledge and extensive basketball repertoire, Doncic had over 2.1 million votes for him to play in the All-Star game. That was second in the West Coast for frontcourt votes behind, ironically, LeBron. You may be wondering why it matters if players are hyped before going to the NBA. The short answer is that the more hyped a player is, the greater his likelihood to fail. Lonzo Ball, a player who was so hyped that he managed to get chosen as the second pick with monstrous expectations on his shoulders, is now a lackluster roleplayer that is a liability for the Lakers. Jabari Parker had Lebron-level expectations on him from Duke as a second pick in the 2014 Draft. He is now a roleplayer that was taken off of the Bull’s rotation and is now fighting for a starting role with the low-ranking Washington Wizards.

It is an easy comparison to look at Parker’s 2014 draft compatriot in “rising star” Andrew Wiggins. Coming into the 2014 NBA Draft, Jabari Parker and Andrew Wiggins were competing for who should ultimately be the top pick in the Draft. Both players were being compared to LeBron throughout the whole process. Scouts praised Wiggins for what seemed like freak athleticism and his innate scoring ability. Wiggins rode his own hype train all the way to the top of the draft. Five years into his NBA career, how is Wiggins living up to his LeBron comparisons? Wiggins is at a career low of effective field goal percentage with 44 percent and has a career low in field goal efficiency at 40 percent shooting, while taking 17 shots per game. Wiggins should not be taking that many shots if he can’t make them. Wiggins has been unable to step up for his team as a leader on numerous occasions and has never improved his playmaking above 2.4 assists per game. His team, the Minnesota Timberwolves, havsonly made the playoffs one year in his NBA career, and that came down to the last game of the season. Despite this clear lack of improvement and inability to live up to his LeBron comparisons, the bar has been continuously lowered for Wiggins. Is it possible players like Parker and Wiggins could ever live up to their comparisons? Yes, but it is highly unlikely.

Have there been players that live up their hype? In general, there have been many players that live up to their hype, but when comparing to a player like LeBron, NBA fans still have to wait. LeBron is such a generational talent that it will be difficult to replace him. But despite LeBron’s irreplaceability, it is guaranteed that every year of the NBA Draft there will be a player compared to him and deemed as “the next LeBron.” Are LeBron comparisons good for young players with little professional basketball experience? Maybe in some ways yes, but not all players can live up to the ideas of them that we have put in their heads.