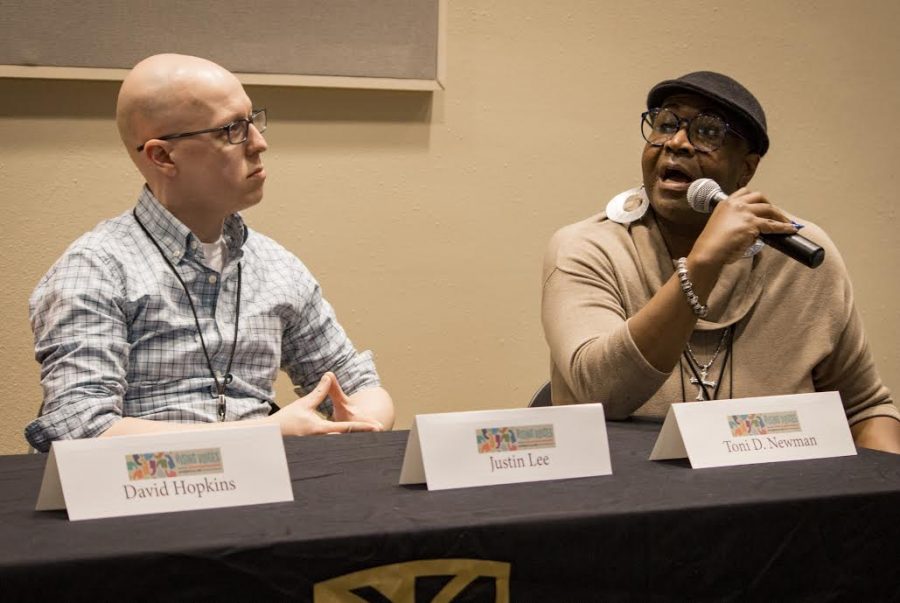 The inaugural Rising Voices Conference, which began on Friday, Oct. 23, and continued through Saturday evening, focused on connecting university alumni with current students through teach-in sessions and panel discussions.

Student Ambassadors from the LGBTQ Center helped to facilitate these interactions, from helping to plan the conference and organize registration to directing alumni through department open houses and live-tweeting panels for those who could not attend.

Over 155 people registered for the events, more than doubling the center’s goal of 75 attendees.

The teach-in session presenters and panelists throughout the weekend included Associate Dean Christy Buchanan, authors Toni Newman and Justin Lee along with many other students, alumni and faculty members focusing on their experiences at the university.

Discussions centered around utilizing career pathways as forums for activism and the importance of sharing stories to further progress.

“We want to showcase the alums; they’ve been doing some really cool things in their professions,” said LGBTQ Center Director  Angela Mazaris, who organized the conference.

“This conference is significant in that, for many alums, it will be the first time they are being welcomed to Wake Forest not in spite of their identity, but because of it, and I’d say that’s something really empowering.”

Another theme of the conference was the discussion of the history of LGBTQIA self-identification and culture at the university, and students in Mazaris’s queer public history course conducted interviews with alumni to contribute to an ongoing oral history project.

Former Master of Divinity Susan Parker described the difficulties in working with the university as an independent minister of the Wake Forest Baptist Church to hold a wedding ceremony with her wife, and several other alumni described being exposed to hate speech and vindictive homophobic roommates, something that current students were less frequently — but still too often — able to identify as part of their experience.

Although those who spoke at the conference identified many hardships that they experienced in their time at the university, the overall atmosphere remained positive as panelists recognized and focused on progressive trends in policy and practice.

“We had to help the university come out of the closet,” alumnus David Styers (‘92) said of the decreasing reluctance of the university to engage in conversations relating to inclusion of LGBTQIA identified students compared to his time as an undergraduate.

Associate Vice President for Campus Life and Director of Global Engagement for the Pro Humanitate Institute Mary Gerardy used Laverne Cox’s recent visit to the university as an example of the shifting attitudes among students.

“When I looked at 2,000 people united in their pleasure of seeing and hearing Laverne Cox, I thought of all of you,” she said to the alumni serving on the history panel, adding that although the university had always hosted controversial speakers, they would not have gathered as large of an audience in the past.

The focus on the differences that alumni were able to make as students during their time at the university and the successes they’ve had since graduation also helped set the tone for the discussions.

“Wake Forest students have this unrivaled ability to see people for who they are,”  said recent graduate Tré Easton (‘13).

The positive changes panelists addressed came to the forefront of the discussion when on Saturday, Oct. 24, Dean Michele Gillespie announced the establishment of several new funds and scholarships.

In consultation with Mazaris and the Office of the Dean of the College, Wake Forest’s University Advancement will provide aid to support students who, after disclosing an LGBTQIA identity, are denied continued financial support by their parents to attend the university.

An Emergency Fund will assist these students when their finances cannot be covered by other means, and two annual scholarships will be awarded, one with preference to incoming LGBTQIA-identified students, the other for students who have already demonstrated exceptional leadership and service to improve the campus climate and its effects on LGBTQIA identified students.

During the closing dinner of the university’s first LGBTQIA alumni conference, held in the Magnolia Room, Stephen T. Russell (‘88) served as the keynote speaker, presenting research on policies and practices related to equity and inclusion, especially as they pertain to campus life and queer-identified students.

“As an LGBTQIA- identified alumnus, the creation of these funds is an affirmation from my alma mater that I am a valued part of the Wake Forest community,” Glenn said. “It feels like a big hug from Wake Forest.”