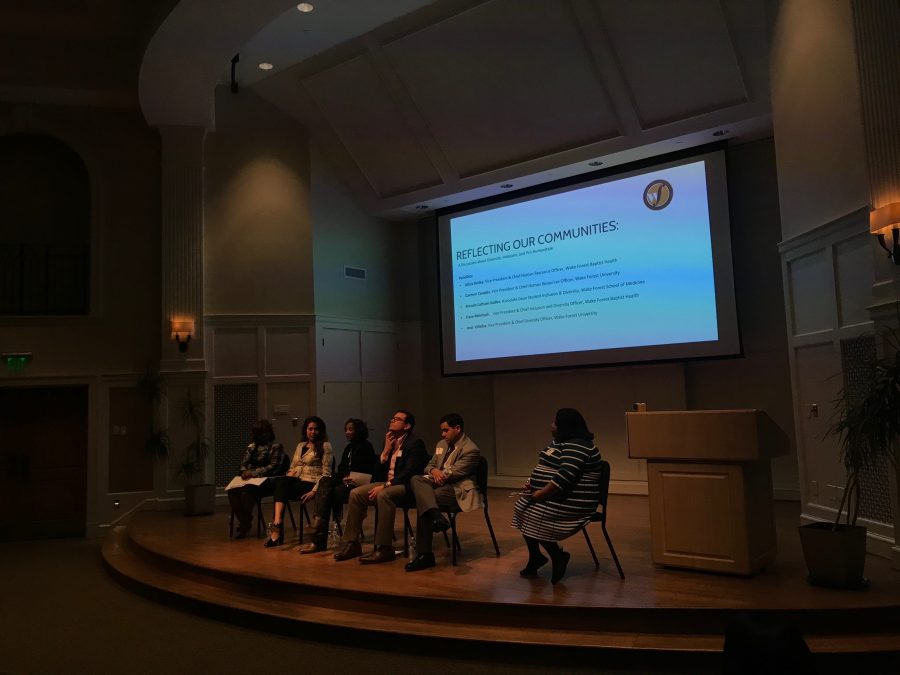 “The enduring truth is that everyone has something to contribute to this conversation.”

Dave McIntosh, vice president and chief inclusion and diversity officer at Wake Forest Baptist Health, finished his introduction during the Women’s Forum’s Panel on Diversity, Inclusion and Pro Humanitate with this statement. The panel, which featured a discussion among staff from the Reynolda Campus, Wake Forest Medical School and Wake Forest Baptist Health, was held on Feb. 25 and focused on the current ideas about and work being done on diversity and inclusion across these specific spaces.

“The panel was planned before current student calls for greater accountability from the institution, but certainly we appreciate the timeliness of the panel’s conversation,” said Erica Still, Women’s Forum co-chair. “The Women’s Forum works explicitly to support the professional development and success of women faculty and staff, which is why the event was targeted toward that population. We recognize that women are doing important work across the institution, and there’s no reason to think we don’t also have much to offer in terms of moving forward toward greater inclusivity.”

After each speaker gave an introduction about themselves, Still, who also acted as the panel mediator, opened up to questions from attendees.

The first inquiry from the audience was whether or not the panelists believed there was a “critical point” at which schools are failing their students. Villalba spoke of the shift from middle school to high school, where certain minorities and genders are told what they “are supposed to be good at and what they aren’t supposed to be good at.” McIntosh also spoke of the negative repercussions of contemporary school segregation.

“Everyone loves to point to systems and institutions, but they are maintained by individuals as well. The buildings didn’t do it; it’s the people making the decisions inside the buildings,” said McIntosh.

The second question was from Collections Archivist Stephanie Bennett. She asked whether the panelists thought the university had a good measure of what diversity looks like, and further, where Wake Forest is failing in terms of its achievement.

“How do we define diversity and inclusion? Wake Forest is really good at speaking the language and counting the brown people, but we are not really good at embracing the concept,” Latham-Sadler said. “We haven’t really been innovative and truly done what we could do.”

Villalba also addressed this question —speaking to the fact that measuring success in terms of diversity and inclusion is difficult, as there cannot be one single goal that can be achieved. Rather, Villalba said that he wants to avoid the plateauing of effort by continuously upholding higher aspirations for inclusion. This was also a key element of the discussion — all of the panelists agreed that inclusion is much more important to creating an inviting campus than diversity itself is.

“The panel also aimed to connect women faculty and staff with thought leaders who are focused on diversity and inclusion at Wake Forest; this introduction will hopefully allow women faculty to reach out to the panelists as resources in the future,” said Sobia Shariff Hussaini, Women’s Forum co-chair.

Another question was presented by Michaelle Browers, a professor from the department of politics and international relations. She asked how the panelists recommended facilitating conversations about the racial climate on campus, as well as to create a space to help those “feeling this pain acutely.” Although Browers did not explicitly state where this pain was coming from, Villalba’s answer addressed the recent controversy surrounding images of the Howler featuring current Wake Forest staff and faculty members, as well as the photo that circulated of a student at Subway with a rope around his body (which many students interpreted as a noose).

Specifically, he discussed the importance of creating a safe space within classrooms to facilitate conversations about the climate of race and gender-related issues on campus. Further, Villalba presented the idea that students within these minority populations should not need to carry the burden of creating this dialogue. He alluded to the current issues being discussed on campus with an example of how he would address non-minority students and faculty.

“Because you ask for advice, I wonder what it [would] be [like] to challenge a non-underrepresented student to process … what they have heard in their residence halls, what they have seen at 2 a.m. at Subway…This is about pushing back on [the idea] that more and more people want to have these conversations,” said Villalba. “What I have heard, turned up to 11 over the past 72 hours, is ‘I Jose Villalba, junior, son of immigrants, undocumented dad, I am done. I am done having to tell you, Dr. Browers, what it’s like to be all of these things. And I told you several times.’ So, one of the ways of turning it around in your classroom, is to turn it into a discussion … to give [those who do not identify as members of minority populations] a chance to share their thoughts and see how it goes.”

After addressing a few more questions, the panel concluded with a statement from McIntosh.

“The thing that gives me hope is that Wake Forest is not ushering this under the rug,” said McIntosh. “We are trying to grow and learn from this, and be comfortable with our own discomfort as an institution.”