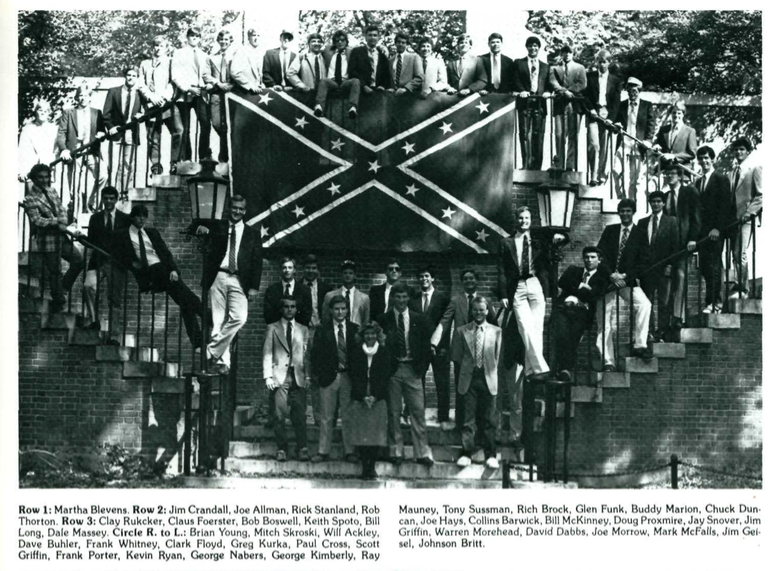 In the past several weeks, colleges and universities across the country have scrutinized their old yearbooks in order to confront the roles that racist imagery and memorabilia played on their campuses in the past. Our campus was not alone in finding such images, including some that involve prominent figures on our campus today.

Last week, pictures were discovered in the 1982, 1983 and 1984 editions of the Howler that separately depicted Dean of Admissions Martha Allman and Associate Dean of Admissions Kevin Pittard with members of the Kappa Alpha Order fraternity, standing in front of a large Confederate flag hung on the stairs leading to Hearn Plaza. Pittard was a member of KA, as was Allman’s husband, Joe Allman, who is currently an adjunct professor in the School of Law. Mr. Allman also appeared in the photos.

Amid widespread calls for her resignation among students, Allman released a campus-wide apology to the Wake Forest community.

“That flag was a symbol of pain and racism then just as it is now, and I understand that much differently in 2019 than I did in 1982,” she said. “Thirty-seven years of life, experiences, relationships and education have made a difference in my way of understanding the world and my ability to empathize with those who are different from me.”

While Pittard gave a statement to the Old Gold & Black, Triad City Beat and Inside Higher Ed, he did not broadcast an apology email to the student body as Allman had done; nor did Allman’s husband. However, the vast majority of anger on campus was directed towards Allman rather than Pittard.

The Editorial Board of the Old Gold & Black believes that both Allman and Pittard should have been held to the same standards and scrutiny for appearing in the photo, as both hold a great deal of power over the future and opportunities of minority applicants, and both wield a great deal of influence over diversity and inclusion on campus. Holding Allman, but not Pittard, to account is imbalanced and misleading, especially considering the fact that Pittard was actually a member of KA, the organization electing to use a Confederate flag as the backdrop of their photo.

In addition, President Nathan O. Hatch released a statement to the student body acknowledging the “acute and ongoing hurt, frustration and fatigue surrounding the underrepresented student experience on campus and the slow pace of change in bringing racial equity to our community.” He also said that he had accepted Allman’s apology.

The Editorial Board further also believes that Hatch should not have stated that he accepted Allman’s apology — an apology that was not directed at him personally, but at the greater community of past and present students of color at Wake Forest. As a white man, Hatch was not personally wronged when Allman and Pittard posed in front of the Confederate flag, and his acceptance of her apology marginalized the feelings of hurt that students of color on campus feel now and have felt in the past.

In the aftermath of the discovery of these photos, emotions on campus remain raw; the pictures are a reckoning for how much progress Wake Forest must make in order to become a welcoming and inclusive home for all students.