Demon Deacons Down Miami At Home 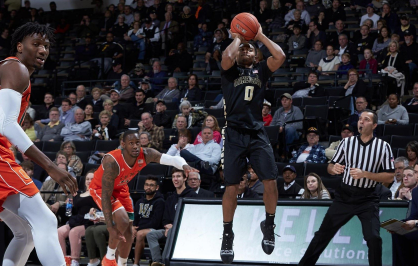 A go-ahead three with 26 seconds remaining by junior guard Brandon Childress capped off a miraculous comeback by the Deacs as they beat Miami (12-15, 4-11) 76-75 on Tuesday at the LJVM Coliseum.

“I thought the biggest takeaway from this game was that our guys continued to battle and fight,” said Head Coach Danny Manning.

Prior to Tuesday, the Deacs were 0-14 on the year in games in which they trailed by 10 or more points at any moment. They trailed by as many as 14 in the second half.

Wake Forest uncharacteristically jumped out to a great start in the contest, leading 17-8 after the first 10 minutes.

However, Miami’s 5’7” Chris Lykes, the shortest player in the ACC, caught fire, hitting five 3-pointers over a six-minute span to help give the Hurricanes a 35-28 halftime lead.

The Canes led 58-44 with around eight and half minutes left on the clock. They didn’t hit a single shot from the field the rest of the game, only free throws.

With two minutes left, Lykes hit both shots from the line to give Miami a comfortable 10-point lead. Sophomore Chaundee Brown quickly knocked down a 3-pointer, and after a Hurricane miss, Childress drove right in for a layup to cut the deficit to five.

Wake Forest’s press in the final minutes was very effective in speeding up Miami, forcing turnovers and getting the ball out of Lykes’ hands. The Hurricanes shot 5-7 from the line during the Demon Deacons’ 16-5 closing run.

Down five with 53 ticks left on the clock, Childress missed badly on a tough shot from the corner, trying to draw a foul, when he had an open lane down the baseline to get to the basket.

“We always talk about the next play in our program,” Manning said. “[Childress] took that shot, and it obviously didn’t go in, but he got into the next-play mode and did some really good things from that point forward.”

He certainly did. With 38 seconds remaining, Childress hit a deep 3-pointer off a dribble handoff from senior Torry Johnson. A bad inbounds pass trying to force it to a double covered Lykes gave the Deacs the ball right back with a chance to tie down 74-71.

The Deacs elected to go for a quick two instead, which they got as Brandon drove in and got a bucket. Miami’s Zach Johnson made 1-2 free throws, giving Wake Forest the ball down two with 30 seconds left.

Childress brought the ball up the court, hearing Miami yelling that they were going to switch on a screen. Freshman Jaylen Hoard came up to set it, and Childress created enough space off a dribble hesitation to elevate and drain another from deep to give the Deacs a one-point lead, and the Coliseum erupted.

“It was a great feeling,” Childress said. “You practice those shots as a kid.”

With one chance to regain the lead, Miami miscommunication and excellent defense by the Deacs lead to a tough last shot for Lykes, which fell short.

Miami Head Coach Jim Larranaga mentioned after the game that the volume in the arena made it very difficult for him to communicate with his players on the last possession.

Center Olivier Sarr remained out for the second game in a row with an ankle sprain. Sophomore Sunday Okeke filled in admirably with a solid 12 minutes.

All hope looked lost after the Deacs were destroyed by North Carolina, but the team has valiantly responded, winning two of their next three games, albeit against fellow teams in the basement of the ACC standings.

Wake Forest will look to build off its encouraging recent success on Saturday as they host NCAA-Tournament-bound Syracuse, and then will travel to Durham on Tuesday to take on #3 Duke.