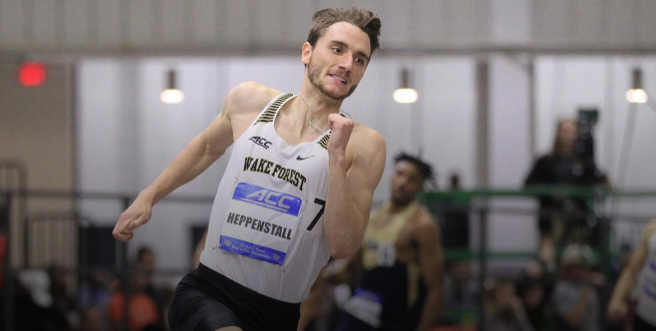 he men’s and women’s track and field teams traveled to Blacksburg, Va. for the 2019 Atlantic Coast Conference Indoor Track and Field Championships on Feb. 20 and 21. The highlight of the championship was Wake Forest senior Robert Heppenstall winning the men’s 800-meter run in record fashion of day two of the championship. Heppenstall is a six-time NCAA All-American and he set the Rector Fieldhouse record in his ACC title win. He ran a blistering 1:46.87, which puts him at the top of the NCAA as he heads into the NCAA Indoor Championship season. While Heppenstall set the facility record and blew out the competition, he was fractions of seconds off of his personal best time, 1:46.68. With the NCAA Indoor meet coming up, followed by an entire season of outdoor, Heppenstall is one to watch moving forward. He was joined in the 800m by Dakota Greenwalt, who  improved his personal best by nearly two seconds with a time of 1:50.83.

Also contributing to the men’s 14th-place finish with 20.5 points was freshman Zach Facioni. Facioni totaled two second team All-ACC awards for the Deacons in the two distance events at the Indoor meet. He started the meet off on day one with a sixth-place finish of 14:16.35 in the men’s 5000m final. He then wrapped it up with another second-team nod in the 3000-meter run with a fifth-place finish. He was the second freshman to hit the finish line and his time is just over a second short of the indoor record. In the field for the men, freshman Kane Aldrich, took eighth in the men’s pole vault, matching his career-best of 4.85m.

On the women’s side, Johanna Schulz started it off strong for the Demon Deacons with her first team All-ACC award in the women’s mile. Schulz set a new personal best in the discipline with a time of 4:43.50 for the mile event, almost a full five seconds faster than her previous personal best. In the distance arena, Samantha Halvorsen tallied a second-team All-ACC finish in the 5000m final on day two of the championship. Also on day two, Alva Hicks set a new indoor school record in Blacksburg in the women’s weight throw. She broke her own record mark of 20.16m set in 2018. Her new school record was good enough to garner second-team All-ACC recognition. Another contributor to the 12th-place finish for the women’s team was Janese Lynch. Lynch was named to the second team All-ACC with her fifth-place finish in the women’s shot put.

It was a strong performance overall for the Demon Deacon Track and Field team in Blacksburg. Next up for the team is the NCAA National Indoor Championships held in Birmingham, Ala. in the second week of March. Watch for Heppenstall to make his mark on the 800m field in Birmingham.