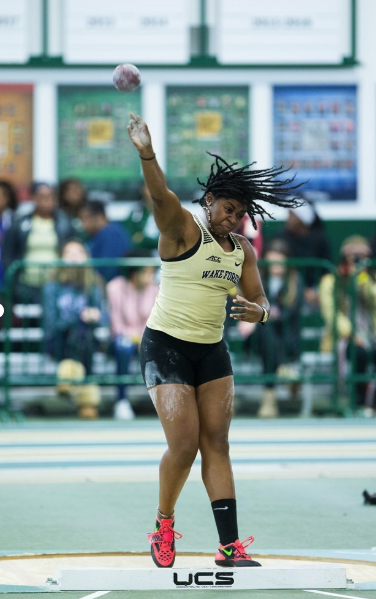 The cousin of U.S. Olympic Team member Justin Gatlin, Alva Hicks has grown up in the track and field community. At Classical High School in Providence, Hicks was a three-sport athlete in volleyball as well as both indoor and outdoor track and field. She was a force in the field, winning the state title in the discus three times and shot put twice, setting the Rhode Island record in the discus and hammer throws. An All-American in the weight throw, she also was the New England champion for discus two times and shot put one time.

In her first indoor season at Wake Forest, Hicks broke the weight throw school record in each of her first three meets. She was a force to be reckoned with, finishing sixth or higher in all seven regular-season meets with three wins. She set a school record and placed 13th at the ACC Championships to cap off the year. She continued that dominance outdoors, earning Second Team All-ACC accolades with a sixth place finish in the hammer throw while setting a school record. In her sophomore season indoors, Hicks competed in every meet for the Deacons, finishing third at the ACC Championships in a new school record. In the outdoor season she continued to throw personal bests and capped her season with a seventh-place finish at the ACC Championships in the hammer throw and a 17th-place finish in the discus. As a junior, Hicks broke her own school record in the weight throw in indoor season, totaling six top-five finishes throughout the season and taking ninth at the ACC championships. In the outdoor season she finished second in the hammer throw and discus at the WF Outdoor Opener and took sixth in the hammer at the Raleigh Relays with a season-best mark. After some rough times, Hicks, now a senior, looks to improve on her school-record performances. She has already set  a personal best in the shot put and earned two straight victories in indoor meets. She looks to continue that dominance into the outdoor season and ACC competition.

Samantha Wexler: How has indoor gone so far and what are you looking forward to in the outdoor season?

Alva Hicks: Indoor season was very consistent to say the least. [It] would get annoying for me [to not see improvement]. In the end, I [was able to pull] out [a good performance] at ACCs. [My performance was] not what I wanted to end with, but it was a personal best nonetheless and a new school record. My true events are hammer and discus. I love them both! I also just know that where I ended indoor won’t be how I end outdoor season. Outdoor has always been my favorite, so it’s going to be fun.

SW: How did Indoor ACCs go and what were you most proud of for the team?

AH: Indoor was bitter -sweet. I took fifth overall, but I know that with one more throw, I could have easily won. The support was what I was most proud of. I saw so many of my teammates cheering me on and vice versa. It was incredible to see!

SW: How do the practices between indoor and outdoor differ, if at all, and what changes when you make that switch.

AH: The practices won’t be that different, as it will be the same intensity. The only switch will be the implements I throw, really.

SW: What are your  goals for the season in the ACC and nationally?

AH: My goal is to have fun this year. For the past three years, I didn’t have fun; it was more like a pile-up of things I have to do — that stressed me out. Having fun comes first for me in every meet and in all that I do because if not, what’s the point? Just doing that will lead me to the distances I want to throw and the places I want to go that includes NCAAs for outdoor!

SW: What are you doing in the fall to prepare for the season?

AH: [In the fall I am] training hard. I would say the [fall] training season is to prepare for the indoor and outdoor season. It was intentional on my part [to train that way, as] I knew what I wanted to do and what I needed to get there. That’s what I’ve been doing since June.