ACC Basketball: What Happened To Duke? 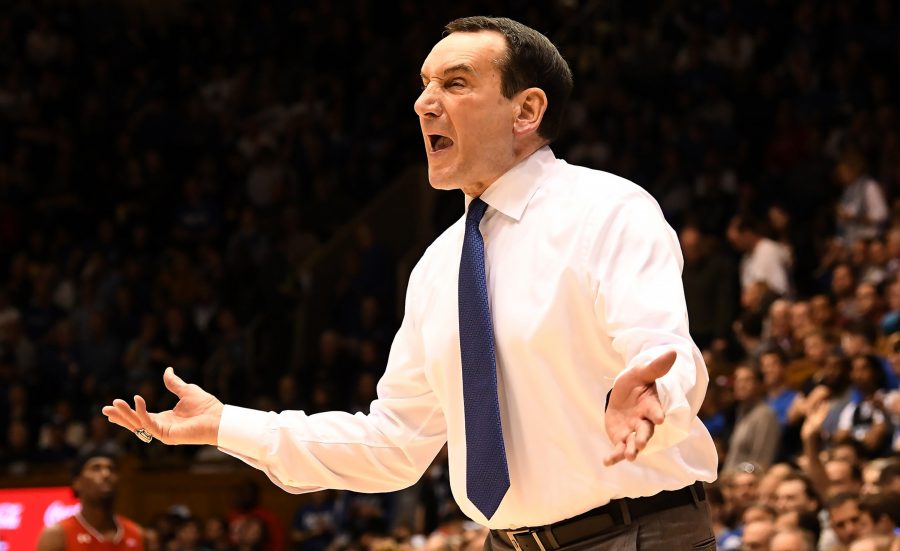 In a file image, Duke head coach Mike Krzyzewski questions a call in the second half of play against St. John's at Cameron Indoor Stadium in Durham, N.C., on Saturday, Feb. 2, 2019. Duke fell to Virginia Tech 77-72 on Tuesday. (Chuck Liddy/Raleigh News & Observer/TNS)

After a series of uneventful weeks in ACC basketball, fans finally got the dramatic week of basketball they had been hoping for. It all started last Wednesday, Feb. 20, when Duke squared off against UNC in their first meeting of the year in Durham, N.C. The story of the game was not how UNC manhandled Duke and controlled the entire game — which happened — but it was why they were able to do so. In the opening minute of the game, Duke star forward Zion Williamson was lost to what appeared to be a devastating knee injury after busting through his Nike shoe when planting his foot on defense. While it seems Williamson will not miss as much time as initially expected, losing Williamson could prove to be a devastating blow to a Duke team with legitimate title aspirations.

In the week since losing Williamson at the start of the UNC game, Duke has looked like a shell of the dominant force they have been all season. Without Williamson, Duke is 1-2. As mentioned, Duke was essentially run out of its own gym against UNC at home, they only narrowly defeated Syracuse on the road over the weekend and they lost to a good Virginia Tech team in Blacksburg, Va. on Tuesday, Feb. 26. The UNC loss really exposed Duke’s lack of depth without Williamson as the rest of the roster beyond RJ Barrett and Cam Reddish shot a mere 4-28 from the field. Additionally, without Williamson on the court wreaking havoc defensively, teams have been far less afraid to attack the paint against Duke. In the UNC game, Carolina’s Luke Maye and Cam Johnson were able to do anything they wanted offensively, combining for 56 of UNC’s 88 points. Losing Williamsom has been a huge problem for Coach K’s Blue Devils this past week, and they will certainly need him back soon if they have any hope to make another deep NCAA Tournament run.

While the big news of the week in ACC basketball was undeniably the injury to Williamson and Duke’s struggles since losing him, that was not all that happened, as the rest of the conference was also in action. In particular, UNC rode the momentum of the big Duke win to two more wins this week in a blowout over Florida State and another victory over Syracuse. UNC was very balanced offensively in their 18-point victory over FSU, with four different players in double figures. Johnson led the way with 18 points thanks to his usual elite outside shooting (3-4 from deep). On Tuesday night against Syracuse, it was Coby White who led the way with 34 points (9-14 shooting, 6-11 from deep) in a narrow 93-85 home victory.

Also on Tuesday, Wake Forest got one of its best and most impressive wins of the season with a shocking come from behind victory over Miami. The Demon Deacons trailed Miami all game only to come back from down 14 points with eight and a half minutes remaining as well as six points with 41 seconds left. Brandon Childress was extremely clutch in the final minutes of the game, however, scoring Wake Forest’s final eight points in the final minute of the game. Childress hit a 3-pointer to cut Miami’s six-point lead to just three, and then after a Miami turnover made a layup to cut the lead to one with 33 seconds left. Then, after Miami made a free throw to extend their lead back to two, Childress drilled what amounted to the game-winning 3-pointer that put Wake Forest up by one with 26 second left. This was a great win for the Deacons, as they look to close out the season on a positive note with just three regular season games left.

Games to watch for this coming week include UNC at Clemson on Saturday March 2, Virginia at Syracuse on Monday March 4, Wake Forest at Duke and Virginia at FSU next Tuesday.