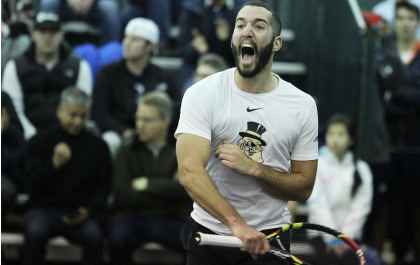 Last year’s NCAA National Champion hails from Cyprus and is currently in his last season wearing the Wake Forest jersey. He has seen a lot of changes in himself and in the tennis team over the years.

Despite losing the ITA National Team Indoor Championship against Ohio State, Petros Chrysochos reflected on how the team worked hard towards the goals this season. One of the most experienced players on the team, Chrysochos emphasized the importance of the winning culture.

“It was tough transitioning from losing the seniors we had last year, and the freshman coming in this year had big shoes to fill in,” Chrysochos said. “We needed to keep the same kind of winning culture in the team, and we shouldn’t deviate from that. It took years to build and to develop that kind of culture we are having right now.”

After having been a Demon Deacons for four years, Chrysochos has seen Wake Forest as a second home. He is amazed by the passion people here have for sports, and he was overwhelmed by the support he got.

“Coming here and seeing all these people that just loved the sport and they appreciated you just for representing this school were amazing,” Chrysochos said. “Obviously, I played for something bigger than myself. I competed with guys, and we represented Wake Forest, the people, the staff, the organization, the department, our majors, our sports, our cultures, our parents, everything, and it was just amazing.”

Last year, Chrysochos led the tennis team to win every trophy, and he won in the finals of NCAA singles tournament against his own teammate. Apart from the efforts he and the team made, he gave credit to the support of the fans.

“When we won the NCAA tournament last year, I saw the whole community in Winston-Salem come together,” Chrysochos said. “They brought like 1,500 people to watch our game, and they outnumbered the Ohio State fans something like 200 to one.”

“The next day after we won, we went to a restaurant where people just started clapping for us when we walked in,” Chrysochos continued. “I was sure they watched the game, and they knew about it, and that just felt fascinating.”

Despite leaving the team when the season ends, Chrysochos is dedicated to the job. Emotionally, Chrysochos opened up about his feelings and shared his wishes for the team.

“When I was a freshman and sophomore, I kind of complained about the little things, and then senior year comes, and I’m like ‘oh, I am out of here,’” Chrysochos said. “I am not going to have another chance to compete with those guys, and it is my last year wearing the Wake Forest jersey.

“I mean, it is going to be hard for sure, because I am so used to playing for and representing the team. But I think another main job I have right now is to make sure the team is on the right path and to translate the message of how to lead the team. The seniors are not always going to be there, and I need people from sophomores and juniors to take the lead.”