Tartuffe Is A Comedic Commentary 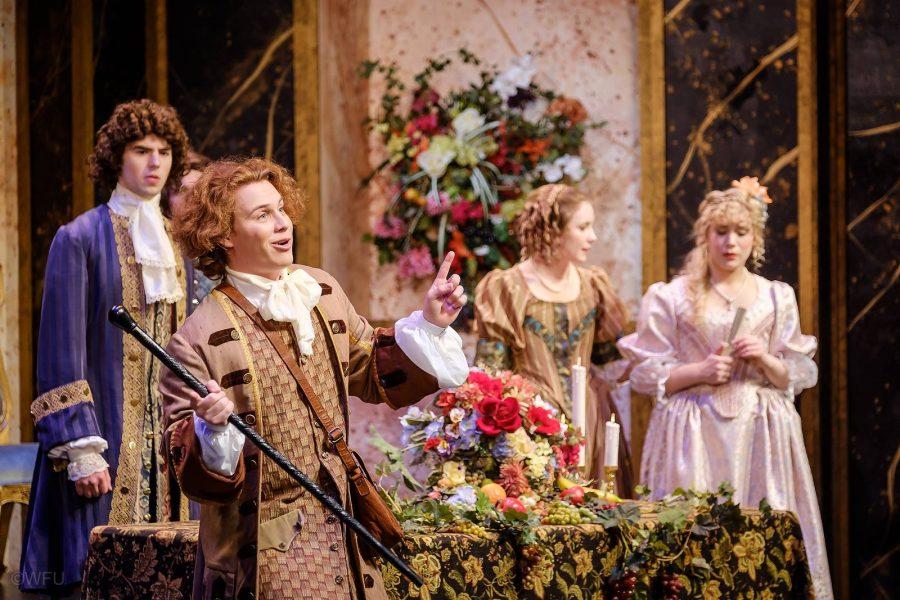 When Molière wrote Tartuffe in 1664, Louis XIV was the king of France, New Jersey just became a British Colony and the plague finally dissipated from Europe. Despite its ancient origins, WFU Theatre’s rendition of the French comedy hilariously highlighted the timeless themes of hypocrisy and the out-of-touch high class.

Directed by J.E.R. Friedenberg, associate professor in the department of theatre, the play is set in the home of Orgon (junior Tut Gregory). Within the trappings of their home, the story follows Orgon’s obsession with Tartuffe (senior Matthew Zoltners), a religious imposter, whom he invites into his home. With lavish stage decorations, from porcelain statues to floral vines, the set quickly engulfed the audience into 15th century bourgeois Paris.

Despite the rest of his family’s aversion to Tartuffe (withholding his mother, Madame Pernelle [senior Sierra Leslie]), Orgon laughably indulges all of Tartuffe’s statements and desires. In one of the first scenes, Orgon returns back home after travel and asks Dorine (sophomore McKinley Meuller) what has happened while he was gone. Dorine proceeds to tell him how his wife Elmire (senior Lillie Burrow) was deathly ill, but Orgon only seems concerned with Tartuffe. Repeatedly asking Dorine how Tartuffe was, he consistently responds with the line “Poor Man!” to the fact that he got good night sleeps, relaxed and ate lavish meals. This is just one of the many scenes where Molière makes fun of the wealthy — and where Friedenberg did a quality job.

One of the most unique elements of Tartuffe is the fact that the dialogue is a series of poems with couplets ending in rhymes. This stylistic choice adds to the lightness of the play, where the language itself becomes both comedic and reminiscent of the bourgeois. It is extremely impressive that the actors not only mastered their lines, but could not deviate in the fear that they would ruin the flow of the rhyme.

The first half of the play worked to set up the story for the most enthralling elements of the play, which took place after the intermission. After Tartuffe, who is supposedly a virtuous man of the Church, tells Elmire he is in love with her, she plots to expose the hypocrisy of their house guest to Orgon. So, she adopts a plan to seduce Tartuffe while Orgon is hiding under a table and listening. This was by far the most hilarious scene within the play — Orgon is so bent on believing Tartuffe that he stays under the table despite Elmire’s ques for him to catch Tartuffe in the act. However, it takes until the moment Tartuffe is advancing on Elmire for a kiss that Orgon jumps out from under the table in protest.

Although Orgon almost ends up accepting his apology, he banishes Tartuffe from his home. However, he does this right after giving Tartuffe the deed to his property and a box containing compromising information about Orgon going against the French royalty. Given these comical circumstances, it makes sense for Tartuffe to promptly send a court order for their eviction.

The play ends with an unsurprising scene, if one knows the historics of how close Molière was to the King himself. Rather than letting Tartuffe the imposter get the final word, the all-knowing Louis XIV condemns Tartuffe to jail and rids Orgon and his family of any legal trouble. Although the comedy does function as a commentary on the bourgeois and religious devotees, it is also a sort-of propaganda piece for French royalty.

Ultimately, WFU Theatre did an amazing job with this work. From the costumes that involved personally-fitted corsets to the timely music, everything about their interpretation of the story created a riveting experience for the audience.