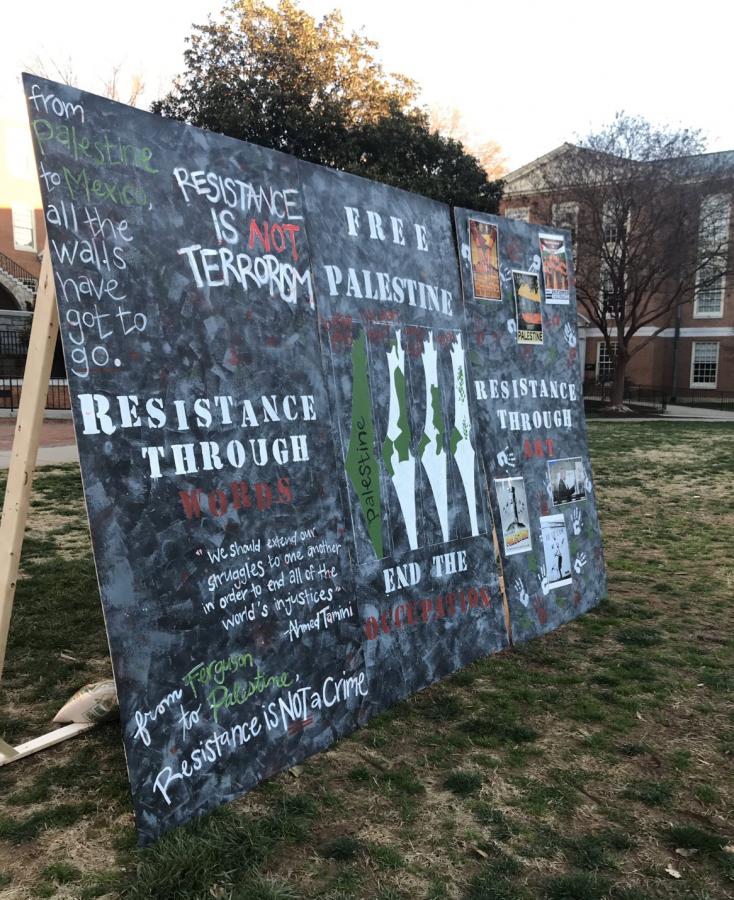 Few modern political issues are as polarizing as the Israeli-Palestinian conflict, which our campus witnessed last week.

The Palestinian Solidarity Week, which took place from Monday, Feb. 25, to Friday, March 1, drew both praise and criticism. The activities of the week included a week-long display in Benson and on Manchester Plaza, a screening of the Academy-Award-nominated documentary 5 Broken Cameras on Tuesday and a panel comprised of professors and a community activist on Wednesday.

The events were organized by the Palestinian Rights Solidarity Coalition, who stated on their Twitter account (@PalRightsCo),“The Palestinian Rights Solidarity Coalition is a community of organizers seeking to uplift and empower the voices of Palestinians in their struggle for liberation. This movement seeks to engage the WFU community in a constructive conversation about this important international issue and to educate folks on the humanitarian crisis in the region and the ways in which WFU can, in the name of Pro Humanitate, stand in solidarity with Palestinians as they fight for sovereignty over their rightful homeland.”

Wake Forest’s chapter of Students Supporting Israel was in opposition to the week’s events, which they demonstrated by setting up their own display in Benson and tabling outside of the Pit with a sign saying, “Jews are indigenous to Israel. Change my mind.” They also attended the “Free Speech, Free Palestine” panel in large numbers. While there, they wore matching T-shirts, while a few students covered their mouths with blue tape, representing how they felt silenced or targeted by the panel.

A debrief and discussion scheduled for Thursday was canceled by the Palestinian Rights Solidarity Coalition, who cited ongoing harassment. Specifically, they sent out an email stating the following: “Due to the levels of harassment displayed last night and over the course of the past few weeks, we have decided it is best to cancel the debrief, scheduled for tonight at 5 in Zick’s Underground. To protect the safety and wellbeing of students, we feel this is the best course of action.”

This cancellation occurred the day after the panel, which was held in Pugh Auditorium. Barry Trachtenberg, Rubin Presidential chair of Jewish history and director of the Jewish studies program, and Michaelle Browers, director of the Middle East and South Asia studies program, spoke at the panel alongside local activist Alicia Alexandra. The event was moderated by Tanisha Ramichandran, the director of religion and public engagement in the department for the study of religions.

The panelists Wednesday night discussed Student Government’s Senate Resolution No. 6, a resolution condemning antisemitism, which has remained controversial among students and faculty since it was passed in December. Although Student Government released a statement clarifying that they have not taken a position on the Israeli-Palestinian conflict, some still believe that the resolution conflates antisemitism with anti-Zionism, which is opposition to Zionism, the political philosophy that argues that the Jewish people have the right to sovereignty over the land of Israel.

The panelists argued that the resolution was an attempt to limit free speech on campus. Additionally, they discussed the difference between criticism of the State of Israel and antisemitism. The responses to the panel were mixed.

“I think it was sad that [the panel] was completely one-sided,” said junior Gabriel Benezcry, a member of Students Supporting Israel.

However, junior Rance Orrell, who helped to organize the event, said he was pleased with how it turned out.

“For the folks that came here genuinely looking to learn and really trying to find out what it is that they can do to support this cause, I think for them that this panel was very, very useful,” Orrell said. “The folks on the panel were absolutely brilliant. Overall, the panel accomplished what we wanted it to accomplish.”

Sophomore Lilian Nassif was an audience member at the panel event. Although she was looking forward to the Palestinian Solidarity Week, she said her reaction to the panel and the week in general was mixed.

“I was super excited to see the Palestinian narrative finally be represented on campus,” Nassif said. “I grew up hearing all about their plight and it truly saddens me, but I did feel slightly disappointed with the overall approach. I felt like the focus was so much on ‘the other’ and demonizing the other side instead of empowering the Palestinians. It’s super dangerous to oversimplify a long, painful history like this one. However, I really do appreciate the effort, and I think students should continue to exercise their right to free speech.”

Junior Phillip Yurchenko, president of Students Supporting Israel, said that he did not think the event worked to clarify the nuances of the Israeli-Palestine conflict.

“What I truly hoped would be a week about how we can help Palestinians manifested itself into blatant antisemitism,” Yurchenko said. “Israel is not perfect, and Palestinians are in a tough situation. Having a week bashing Israel, with claims of settler colonialism, policies of murdering children, ethnic cleansing and denying Jewish connection to the land, while ignoring the human rights violations that the PA, Hamas, Egypt and Jordan commit against the Palestinians is a clear double standard.”

In response to criticism, the Palestinian Rights Solidarity Coalition released a statement affirming their goal and position.

The Palestinian Solidarity Week and the responses to the week demonstrate that the Israeli-Palestinian conflict and the situation of Palestinians are issues that are important and relevant to the Wake Forest community.