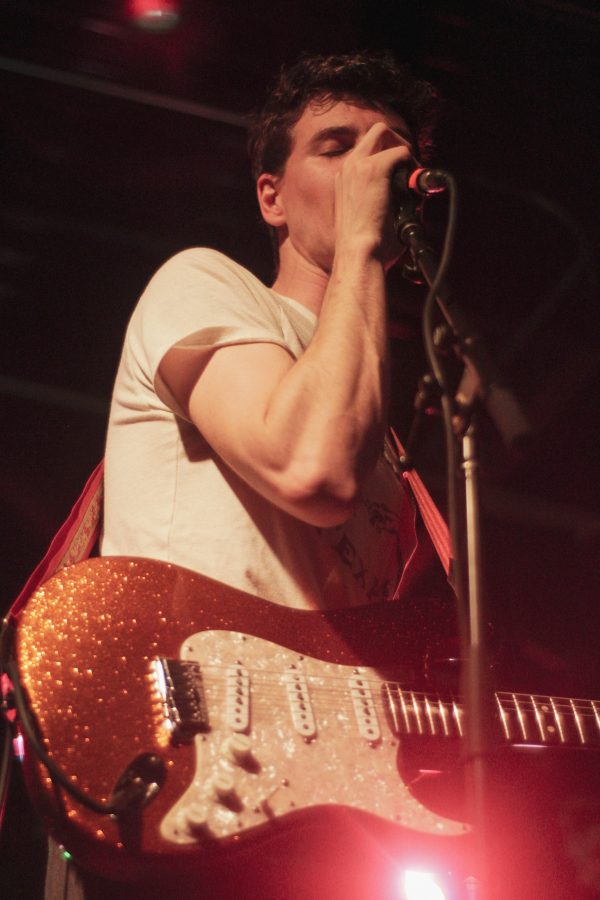 Cold rain poured down onto the streets of Winston-Salem all day last Saturday, as it did all over North Carolina, which seems to be stuck in the eternal limbo that is waiting for spring. I was on my way to the sold-out Houndmouth concert and in an effort to vary this view of rain, I took I-40 to my destination, Carrboro, in search of some musical reprieve. As I drove, I wondered how many people would even show up to the concert. Not everyone likes to be out when there is potential for flooding, you know. However, when I arrived just 10 minutes after the doors to Cats Cradle (a popular mid-sized college-town venue) had opened, I was met with a sizable crowd already gathered around the stage. If there’s any lesson I learned from Saturday night, it’s that rain doesn’t dampen the mood of the concertgoer, and it certainly will not alter the energy of a returning act who has sold-out a venue.

Following performances from newcomer Modern Love Child as well as seasoned veteran Ben Kweller, Houndmouth stepped onto the stage. The blues-inspired indie-rock outfit from Indiana arranged themselves on the last stop for their three-month tour and promptly started into “Ludlow” from their first album.

The trio was founded in Indiana, but their southern-midwestern roots span from Kentucky to Nashville to Missouri, and given this, lead singer Matt Myers, bassist Zak Appleby and drummer Shane Cody showcased a homegrown sincerity in their stage setup and appearance. With additional help of keys, guitar and saxophones, the boys on stage were dressed in white t-shirts or button downs or sports jackets, slacks and leather shoes, giving the appearance of a gang of some sort of ‘60s-inspired cowboy heartthrobs. With a stage divided front from back with upwards of six amps stacked horizontally, the setup was reminiscent of something close to American Bandstand, and as Myers and Appleby bopped around their platform, thoughts of rain falling outside were replaced by the sunshine-soaked lyrics that covered the crowd.

They sang songs spanning the length of their six-year discography with lyrics that heralded tales of the West, drugs, fights, women and crazy cousins. Their riffing with the accompaniment of saxophones and distinct bass lines brought out tones of the blues that their lyrical storytelling had nodded toward. With an energetic crowd toe-tapping along, Myers took one break to yell out “we did it, we sold it out!” With the radiation of excitement from the crowd, I was hardly surprised by this statement, and I certainly wouldn’t be surprised if this is something he shouts at all of their future shows. “Sedona,” my, and clearly the crowd’s, favorite, was the last song of their main set. Myers eclipsed the shouts of the audience as he sang, “I remember, I remember when your neon used to burn so bright and pink / A Saturday night kind of pink.” I couldn’t remember the last Saturday night kind of pink I’d seen in the previous dreary weeks, or all winter for that manner, but as I shouted along, and subsequently exited, I had to think that maybe more Saturday nights like these were the key to welcoming the spring semester.