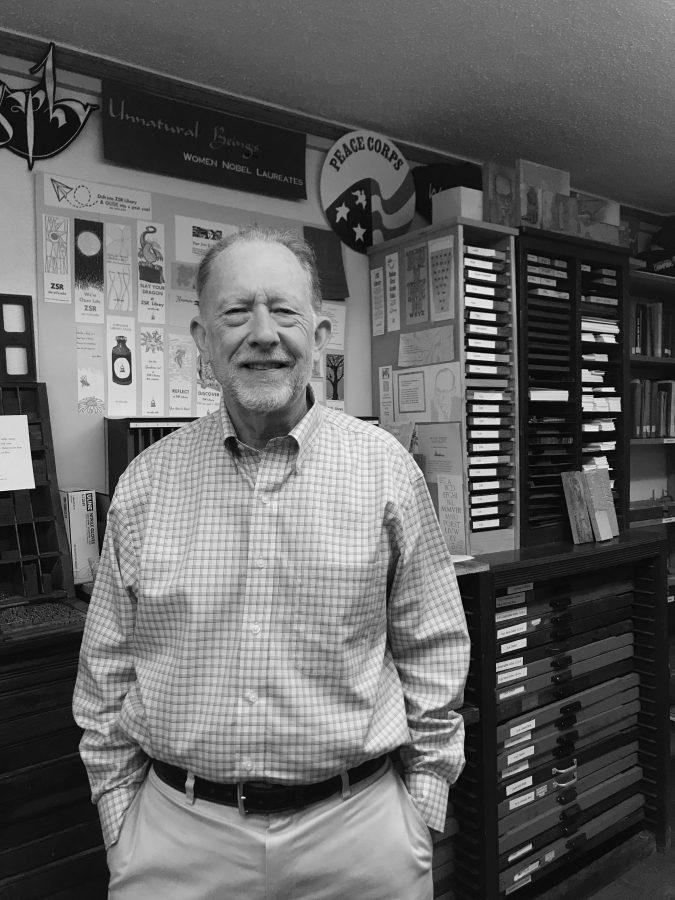 After studying art in college, Preservation Librarian Craig Fansler has been able to use his skills to help upkeep the materials in the university’s special collections and archives. Although he has been working at Wake Forest for 24 years, he began his career in preservation in 2005. Along with refurbishing and protecting books, printing plates, posters, art and other materials, Fansler is also able to exercise his creativity by making bookmarks and promotional materials for the library.

Discreetly located on the third floor of the library, Fansler’s office is filled with tools, a variety of letter presses and a multitude of his own artistic creations. Between the hours of 9 a.m. and 5 p.m., one can find him working away at any of his one specific projects, which require both his ingenuity and a skillful hand.

The main things are do no harm, don’t do anything you can’t reverse and use materials that have a neutral pH, so not acidic or alkaline. This, in a nutshell, are the basics in terms of guidelines. Then, you know, every item that I work with is individual, so usually I sort of approach them as individuals. Some things need a box, or certain kind of box; some things need to be put in a folder.

What would you say is your favorite part about this job?

The opportunity to do something that’s tangible, so at the end of the day I have something that I can look at and see that’s a concrete thing. I really like that. It’s rewarding. You know, “Look, I did this.” Also, I have a degree of autonomy. I think everyone likes that, to have a little bit of autonomy over their work and implied trust from my director and colleagues and creativity. There’s a degree of creativity in a lot of the things I do, and I like that. I have an art background so a little bit of creativity goes a long way.

Could you talk a little bit about your background in art?

I went to art school at East Carolina [University]. I really enjoyed it until I graduated and then I’m like, “What do you do with this stuff, you know?” But I still enjoy doing art. I minored in printmaking, so I have strong drawing skills and a design background. With the letter press that we have, I do a lot of creative things with that, drawing and making prints. I’ve been doing linoleum cuts on the press for bookmarks and for poetry broadsides, sometimes some for Wake Forest Press, for Lifelong Learning, for the library or for keepsakes when we have events. For example, we had the “200 years since Frankenstein” reading this year, so I made a Frankenstein broadside with his face on it. It’s fun, it’s all over the place. That is really unique in a job, to be able to have something creative that you did. I love that, I love it.

On the flipside, what would you say is your least favorite part about this job?

Probably keeping statistics. I understand the importance of it, but it’s sort of drudgery a little bit. The way I think of it, it helps people understand the amount of work I’m doing and the kind of work I’m doing. There’s also a method of knowing where things are, physically. That is sometimes an issue in special collections, as it can be hard to find things, so it’s a tracking mechanism as well. I try to keep that in mind, but that’s my least favorite thing probably.

What would you say is one of the coolest projects you’ve ever completed?

I would say one of them is the Dolmen Press. The Dolmen Press is an arch press that we acquired back in the 1980s. It sat around for a long time until it was finally processed, and part of that press was printing plates. The Dolmen Press was an all Irish kind of thing, so it was Irish authors and poets, Irish artists and then the people running the press were Irish, so everything was done with that focus. In the beginning, they were printing books on their kitchen table. They had a little, tiny printing press. And so, we somehow or other got all the printing plates. You can look at a printing plate and not be able to tell what it is. Two years ago we had a library fellow, and she and I worked on a project together where we went through every single printing plate. There were over a thousand of them. We went through every one, we found out the author, what book it was printed in, where in the book it was printed, the year it was done and any other information about it. So, this is going back to statistics in a way. We created a spreadsheet with all this information in it. Because they were just in boxes, loosely categorized.

Some of our older things include items from the 1300s, and handling those things is sort of special for me, just seeing those things and being able to work with them. We have some of the earliest things published by former slaves. We have a pretty large collection of writings from former slaves. Those things are super rare because those people were African Americans and they were treated badly, still are. Just to have something like that, it’s even more rare in a way, because probably some people burned them. We have such a great collection of a variety of things. I like seeing what we have, handling it and making something to protect it.

You kind of touched on this but obviously you work under Special Collections and Archives, so what do you think is important about having a strong archive, having these collections?

Well, the reason we have it is for scholars to use it. And so, with the Dolmen Press, going back to that, several scholars have come here with a grant from the provost to do research on the it. We hold so much of that material, and there’s no other place they can get it. So everything that we do to make that available is good. It’s all for students who want to do research, faculty and external scholars. That’s why we do it, and for the future. Because a lot of the materials in any library are duplicated in pretty much any other academic library. But the unique stuff, we’re the only people that have that, so that’s special and we take pride in that. I would say it’s fair to say that we take pride in our collection and really want to care for it.

You’re definitely behind the scenes in terms of what’s happening in that department and in the library in general, so what do you want people, students, someone reading this article to know most about your job?

I mean, one of the most important things is just that my job is a key component in making materials accessible to them. So, if something’s in bad repair, they can’t use it. If it’s in good repair or it’s protected by a box or an enclosure of some kind, they can use it. We did a big project two years ago on the anniversary of World War I. We have a large collection of World War I posters, so I made a lot of repairs. I spent an entire year during repairs on World War I posters, the whole collection. For some of them, I made a protective, temporary enclosure so students could use it. I think that’s the most important part about what I do. My job is to make things available until they’re protected or repaired. Sometimes it’s only one thing and it needs to be repaired but sometimes it needs to be put in a box. That’s important. Otherwise, it sits on a shelf and nobody is going to see it, that’s not what a library is about.