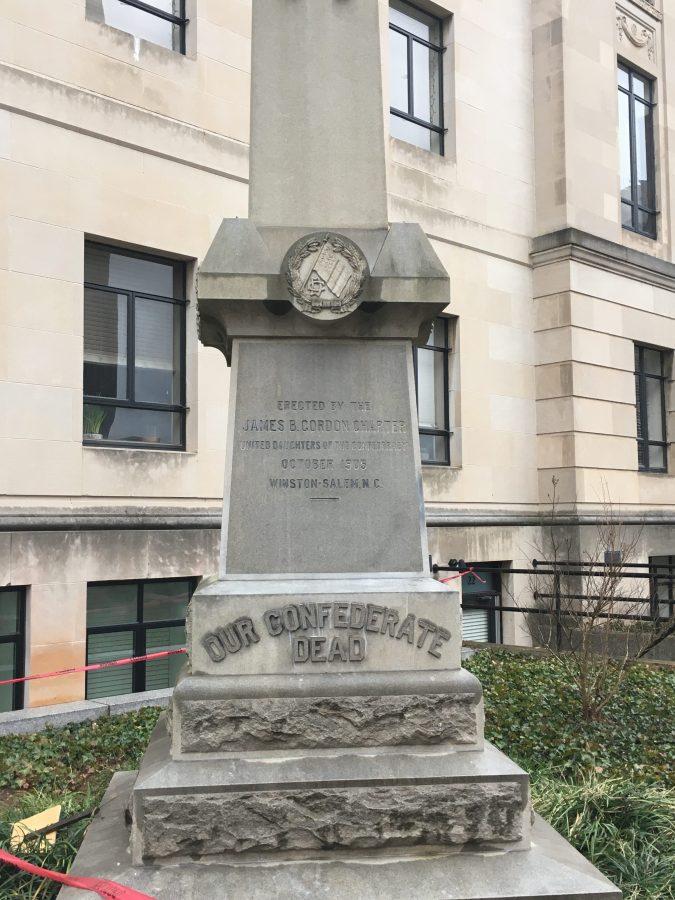 After months of contention, the city of Winston-Salem removed the Confederate monument on March 12 from its downtown location. Since 1905, the statue has stood on the corner of Fourth Street and Liberty Street, but was moved to an unspecified location last week.

During the removal, the intersection was blocked off with fences and road barriers. Crews worked for multiple hours to remove the statue because it had to be disassembled piece by piece.

The city’s decision to proceed with the removal was made out of concern for public safety. City officials, including Mayor Allen Joines and City Attorney Angela Carmon, have cited past incidents of vandalism as reason for the statue to be removed promptly and in a civil manner.

Joines referenced this violence in Charlottesville when explaining why the city took such lengthy security measures when removing the statue.

“We did this carefully because of public safety issues. You saw what happened in Charlottesville with the crowds there and the car that drove into the crowds, and that’s the reason we’ve established these barriers here to make sure that any work that’s being done is being done safely,” said Joines.

The removal follows recent developments in the ongoing legal battle between the city and United Daughters of the Confederacy (UDC) regarding the status of the statue.

The James B. Gordon chapter of the UDC erected the Confederate statue in 1905.

In a Jan. 30 letter to James A. Davis and Associates, the legal representation for the UDC, Winston-Salem City Attorney Angela Carmon, denied the UDC’s request for a delay of action that would have prevented the city from taking further action regarding the statue for sixty days.

In this letter, Carmon cited concerns for public safety as the main reason for seeking a resolution to the controversy around the statue’s location.

“It is clear that the presence of the Confederate statue, in its current location jeopardize [its] preservation and is prejudicial to public safety,” Carmon said.

The relocation of the statue to Salem Cemetery will not happen immediately, and it will likely be weeks before crews begin work to relocate it.