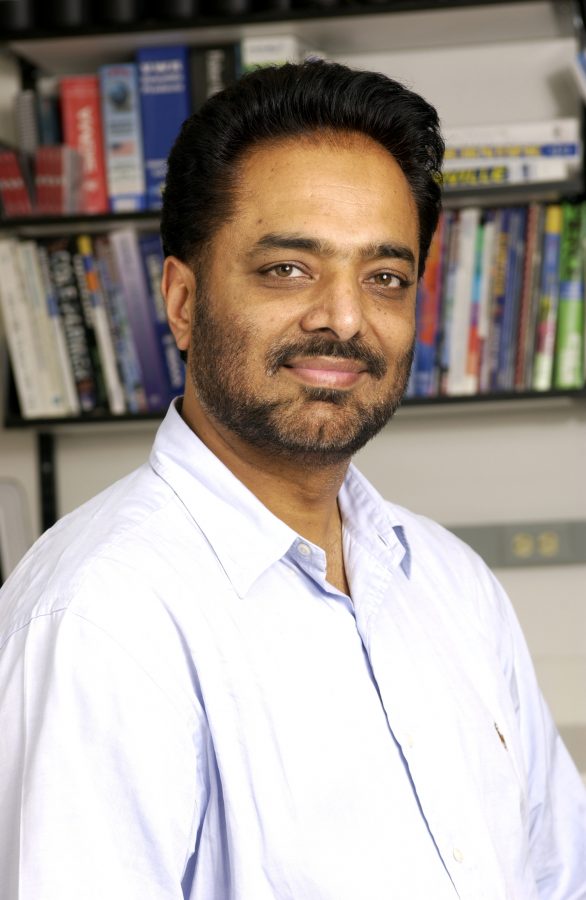 Shiv Grewal of the National Cancer Institute spoke to approximately 40 students and faculty about “Heterochromatin inheritance and epigenetic control of the genome” in this week’s Frontiers in Biology seminar on March 18 in Winston. Grewal is a member of the U.S. National Academy of Sciences, and much of his research within the field of epigenetics focuses on the formation of heterochromatin, which is the tightly packed form of DNA.

“Grewal’s research in the early 2000s laid the foundation for the then-young field of epigenetics,” said Wake Forest PhD candidate Fadi Marayati. “His focus on how environmental stress factors alter gene expression could change our understanding of how we are more than just our genomic sequence, but also what choices we make and what environment we live in, on a daily basis.”

In other words, he helped show how nature and nurture affect us on a molecular level.

Grewal began his talk with a brief introduction to epigenetics, the study of how genes can be switched on and off within an organism’s cells, without actually altering the genetic code stored in DNA itself. Epigenetics help to control cellular differentiation, the process by which two cells in your body can develop into completely different specialized cell types, despite having exactly the same DNA. Some diseases, including cancer, have also been linked to epigenetics, and certain epigenetic changes, whether good or bad, can even be inherited.

Your body turns off, or “silences,” certain genes so that not every protein encoded in your DNA is expressed all at once in a single cell. This silencing occurs by adding methyl groups to the histone proteins that your DNA winds around, which blocks transcription (the first step of gene expression) in these regions of your DNA. Histone proteins are important for keeping DNA structurally organized. Together, the DNA and histones form chromatin, the material chromosomes are made from.

There are two types of chromatin: euchromatin, which is loosely wound and easily accessible for transcription, and heterochromatin, which is tightly wound and harder to transcribe. Grewal explores heterochromatin using fission yeast as a model organism. One feature he found involves complexes of silencing effector proteins, which bind to heterochromatin and promote genome stability. Mutants without these silencing effectors allow transcriptional access to gene sequences which should be suppressed.

Stress is also an important aspect of epigenetics, as organisms like yeast and humans can modify their gene expression to better deal with stressful conditions.

“The reason you should care about this is this is the system which allows your cells to change gene expression as cells experience stress,” Grewal said.

Grewal found that certain genes that are simply switched on or off under normal conditions can instead be regulated using a different mechanism under stress, which allows some gene expression, but only within a certain range.

Grewal also found that iron uptake is very important for heterochromatin assembly and epigenetic genome control in cells. His research team is currently working to understand how the iron helps with this process and why cells without iron uptake cannot form heterochromatin correctly and may mis-express genes.

Grewal took time at the end of his presentation to thank his collaborators and the many researchers in his lab, many of whom are connected to Wake Forest.