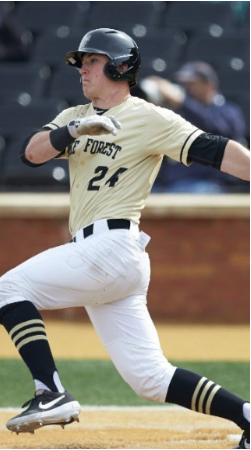 Wake Forest Baseball is struggling to live up to high preseason hopes. The Diamond Deacons limped through the start of their ACC play with a 3-3 conference record and a lone win against non-conference Appalachian State. A bright spot is sophomore slugger Chris Lanzilli who received multiple awards with an outstanding week at the plate.

The week started with Wake Forest’s first conference series against Notre Dame. The Fighting Irish took two of three, and Wake Forest lost those games after leading in the seventh inning. The third game of the series was a stunner for the Deacs as they blew a 7-4 lead in the ninth. Notre Dame ended up winning in the tenth.

An even bigger stunner was the down week for sophomore pitcher Antonio Menendez. The sidearmer has been terrific for the Deacs as their shutdown guy in the bullpen. Last week was different for Menendez. The righty gave up the lead with four earned runs in the first game they lost to the Irish. Menendez also gave up two runs in the ninth inning of the rubber match against Notre Dame. Expect Menendez to hunker down after this week and return to his star-studded ways. Coach Tom Walter will continue to call on Menendez in important times as he leads the team in 11 pitching appearances.

After winning a lone game against Appalachian State at home, Wake Forest slowly righted the ship as they took two of three games against Boston College. The Deacons dropped the first matchup against Boston College before putting up a combined 35 runs in the next two games. Wake Forest’s sophomore ace Jared Shuster got his fourth win despite giving up four runs in the first inning. The reason was a record setting 13-run inning for the Deacons in the fifth. Junior Patrick Frick had a grand slam, accompanied by freshman Michael Turconi’s first home run as a Deacon.

Sunday’s Saint Patrick’s Day game was lucky for the Deacs, as they rocked fresh green uniforms. The main storyline was the outstanding batting display by Lanzilli. The right-handed slugger broke the Deacon record with 10 RBIs in a game. Lanzilli ended the week with unbelievable numbers recording a .444 average, three home runs and 16 RBIs. The Stoneham, MA, native leads the ACC with 10 doubles and is second in the nation with 31 RBI’s.

Last week illustrated that the Deacons have been hit-and-miss. Wake Forest has had some unbelievable performances at the plate, with seven batters hitting above .300. Along with Lanzilli, Frick is on a tear at the plate after a slow start. However, the bats have come up short in some key situations. Wake Forest had an opportunity to win the at the plate against Notre Dame, but they went 0-9 with a walk in the last three innings.

The Deacons are still playing well. They are above .500 and there are many positive signs for the rest of the season. However, Wake Forest is losing games and series they need to win. Losing two out of three against an under .500 Notre Dame team must frustrate head Walter. Wake Forest must beat under .500 teams if they want a shot at a regional. Even dropping only one game against Boston College is a little frustrating for the team. After losing a heartbreaking series against an inferior opponent like the Irish, Wake needed a sweep against Boston College.

The season is in full swing, and it is yet to be determined if the Diamond Deacons will live up to their beginning-season hype. Wake Forest will want to turn it around against their rival Duke this upcoming week.

The three-game Duke series starts Friday in Durham at 4 p.m.