MLB: Award Predictions For The 2019 Season 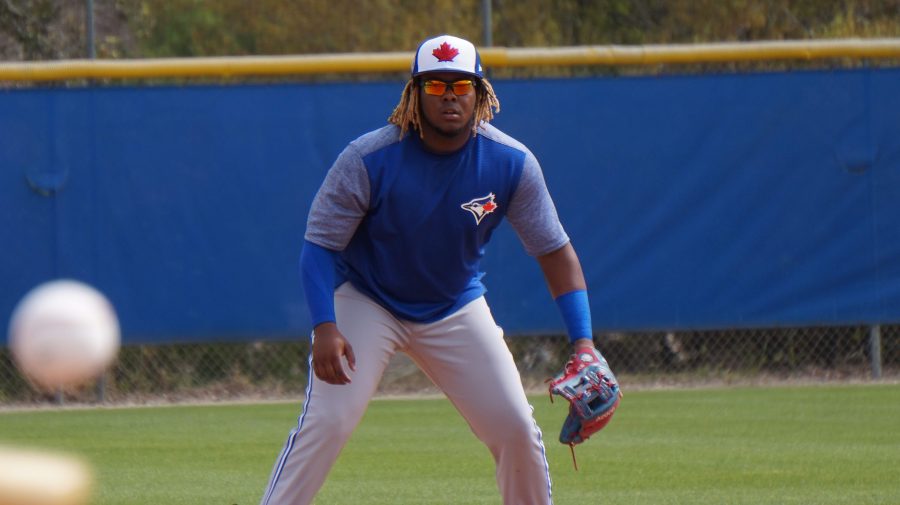 Blue Jays third baseman Vladimir Guerrero Jr., regarded as the top prospect in baseball, zeros in on a ground ball hit to him during infield drills at Englebert Complex in Dunedin.

The shape of the awards races in 2019 is not unlike it was in 2018. Perennial stars like Mike Trout and Max Scherzer appear poised to add to their trophy cabinets, while awards like the NL MVP, aided by the NL’s addition of Manny Machado and retention of Bryce Harper, could go in a number of different directions in 2019.

No excess of superlatives could scratch the surface of describing the consistent greatness of Mike Trout. Perhaps a starting point for discussing his transcendence would be acknowledging that his 12-year, $430 million extension is a bargain for the Angels. From 2012 to 2018 Bryce Harper and Manny Machado have combined for 60.9 fWAR; on his own, Mike Trout accumulated 64.0 fWAR over the same period. In other words, Trout is literally twice as valuable as each of this season’s highest-paid free agents.

So yes, Trout probably could have held out and gotten more money. If he made it to free agency, he could have received a $500 million contract, and he would have deserved it. Part of Trout’s appeal, though, is that he does not seem interested in building a financial or cultural empire like Harper does. Trout just really, really loves playing baseball.

In 2018, Trout posted some of the best offensive numbers of his career, managing a 191 wRC+, a .460 OBP, 39 homers and 9.8 fWAR. Trout has finished first or second in AL MVP voting every year since his first full season, except for 2017, when he missed 48 games due to injury. So, until the Trout decline comes, and decline seems to be nowhere in sight, he deserves to win the MVP nearly every year.

Unlike in the American League, where Mike Trout makes visualizing anyone else winning the MVP impossible, the National League MVP race is wide open. Bryce Harper, Manny Machado, Javier Baez and Nolan Arenado are all popular picks, but this award could easily go to a dark horse candidate when everything is said and done.

Ronald Acuña, Jr., Atlanta’s five-tool youngster, could be the sleeper pick who takes this award home. In his 2018 rookie season, Acuña’s torrid second half carried him to an NL Rookie of the Year award win, and his ceiling is as high as anyone’s in the NL. When Acuña’s second-half stats are extrapolated to a 162-game season, they are jaw-dropping, as he would have been on pace for a .322/.403/.625 slashline, 46 homers and 34 stolen bases. Those are MVP numbers.

Despite pitching 158 innings in 2018 and falling short of the 162 innings required to qualify for an ERA title, Chris Sale finished second among AL pitchers with 6.8 fWAR. Sale posted career-best numbers in several categories, including a 13.5 K/9, a 0.86 WHIP, a 1.98 FIP and a 2.11 ERA (his lowest as a starting pitcher).

The key for Sale in 2019 will be staying healthy and maintaining effectiveness through the last months of a season. In 2017, Sale posted a superhuman 1.04 ERA in July before regressing to a 4.38 ERA in August and a 3.72 ERA in September. In 2018, Sale missed significant time in August while nursing inflammation in his throwing shoulder, causing him to fall short of the 200 IP mark for the first time since 2014.

Justin Verlander will always be a threat to push for the award, and Cleveland pitchers Corey Kluber and Trevor Bauer each have outside shots, but if Sale stays on the mound all season in 2019, the Cy Young will be his to lose.

In case you missed it, as Clayton Kershaw declined, Max Scherzer found another gear, and it could easily be argued that he is currently the best pitcher in the game. Jacob deGrom overshadowed Scherzer last season, and rightfully so, as deGrom’s 1.70 ERA was one of the lowest in big league history.

In a normal season, though, Scherzer could have handily won the Cy Young award. The workhorse finished with exactly 300 strikeouts, carried a 2.53 ERA and pitched 220.2 innings for the Nationals. The seven-year, $210 million contract Scherzer signed with Washington in 2015 could eventually go down as one of the greatest free agent pitcher signings of all time. Despite the fact that he will turn 35 this summer, he continues to evolve and improve, defying even the most optimistic expectations that accompanied his mega-deal.

Scherzer still pitches off his fastball, which he threw 50.3 percent of the time last season, and as long as he continues to maintain velocity, he should dominate again in 2019.

Vladimir Guerrero, Jr., son of Hall-of-Famer Vladimir Guerrero, boasts one of the most polished prospect profiles of any hitter in recent memory. He will miss the first three weeks of the season with a mild knee injury; though, he would have missed that stretch even without injury, as the Blue Jays fully intended to keep him in the Minors to manipulate his service time and maintain an extra year of team control.

When Vlad debuts, he will instantly be one of the better hitters in the American League, and he could quickly reach elite status if he continues to demonstrate a keen ability to adjust at higher levels. He possesses easy power to all fields, uncanny plate discipline for his age and elite bat-to-ball skills. He shredded Minor League pitching in 2018, en route to a .381 average and a 1.073 OPS in his time split between Double-A and Triple-A. Frankly, the only thing standing in his way in 2019 is the possibility of an injury.

Victor Robles, along with 2018 rookie Juan Soto, was a large part of the reason that the Nationals felt secure in moving on from Bryce Harper. Many expected Robles to earn substantial playing time with the Nationals in 2018, but an injury kept him out of the big leagues for much of the season. In 66 2018 MLB plate appearances, Robles posted a 131 wRC+, stole three bags and hit three homers.

Robles is already one of the most athletically gifted prospects in the game, and his elite speed should allow him to succeed in any outfield position, including centerfield. As he is only 21, it could take some time for him to fully grow into his power, but his other tools are impressive enough to carry him to multifaceted success even if he does not hit 20 or more home runs at first.