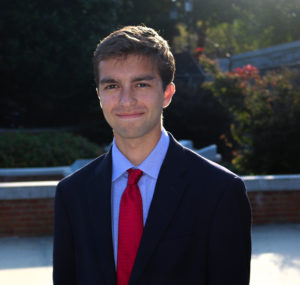 Alberto Bufalino is a freshman who is an intended politics and international affairs major. As a Freshman Senator, he served on the Academic Committee, working on a variety of different projects which permitted him to gain further experience and become more involved in Student Government and the campus community.

Bufalino has worked on several different projects throughout his year in Student Government. This has included planning and revision of Faculty Appreciation Week to allow faculty to have a more pronounced voice on campus. Bufalino has also been working to develop a research week for undergraduate students to deliver research in a TedX-style presentation to their campus community.

Overall, as Secretary of Student Government, Bufalino is intending to bring about more transparency and involvement to the campus community. One of the main issues he referenced was the lack of connection between the Senate and the overall student body. Often times, this ambivalence on campus is caused by a lack of communication between student leadership and the students themselves.

As Secretary, Bufalino will pursue town halls by Student Government executive officers to the student body at least once a semester. This would allow students to voice their grievances directly to the student leadership, who would then be tasked by ensuring their constituents with progress on a certain topic. Bufalino will help to further document Senate meetings with more detail and to create reports of the work done by every Student Government committee to be shared with the student body.

Bufalino believes firmly in finding ways to improve campus culture. He is an avid supporter of Student Government’s initiative to bring about more discussion about tough campus-wide issue and wants to involve the student body more in these discussions as a way of finding meaningful ways Student Government can use their powers for good.