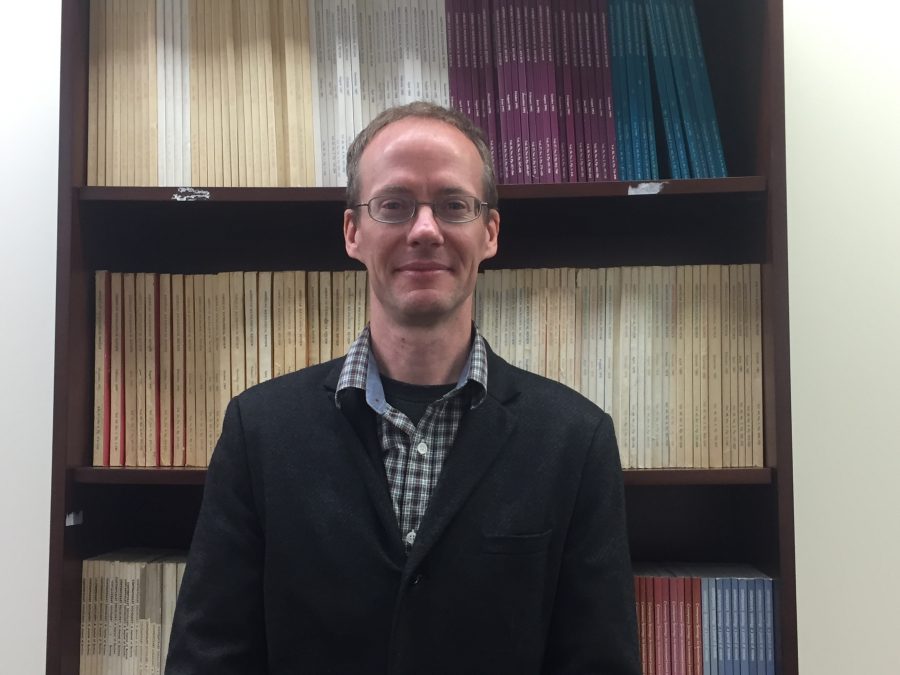 Saylor Breckenridge is a quantitative sociologist who has taught sociology courses related to business, film, statistics, and research methodology at Wake Forest since 2001.

In 2010 he revealed his diverse personality when he starred in a friend’s music video titled “Team Spandex.” His colorful outfit and wild persona in the video highly contrast with his professional and academic demeanor.

In the video, a black top hat sits upon his head. A light blue button-down shirt and bright orange tie lay under his colorful, zebra-striped vest. This isn’t what a typical Wake Forest professor looks like.

But the hum of a needle alerts viewers that his hands are running golden cloth through a sewing machine on a silver table in the middle of a forest. Perhaps even stranger, the words “Andre’s Spandex Lair” flash on the screen.

This spandex sewer, though, is the same professor grading Wake Forest sociology papers and tests during his workday. What people watching the 2010 music video “Team Spandex” see is simply a hobby for Saylor Breckenridge.

“The singer in that band [Sugar High Gang], Shanthony Exum, was both a friend and a neighbor and needed someone to be in the video,” said Breckenridge, a sociology professor at Wake Forest since 2001 who played the part of the spandex magician. “Somebody gave me a costume and a script and I followed it. It’s fun.”

In his office, his plain button down shirt and dress pants contrast strongly with his attire in the music video. With light brown hair and blue eyes, standing in a dimly lit room, typing at computer on a raised platform, he looks much more like the academic that he is.

A quantitative sociologist, Breckenridge teaches economics and social statistics of sociology. He has been at Wake Forest since 2001, except for two tours of duty at the National Science Foundation. In 2008 and 2009 he was the director of the Methodology, Measurement and Statistics Program. In 2014, he was the director of both Sociology and the big data programs between social sciences and education. The first position had him handle a specific budget to award money to researchers, while the second saw him aid in the creation of big data centers to help universities answer questions.

During his time at NSF, though, he encountered research on cumulative advantage, which is a theory that states that success early in life gives someone a better chance for success later regardless of any qualities or skills. The academic version of that is grade lock, in which a student gets a grade early in the semester and the professor unconsciously forms an impression of that student and  his or her abilities.

“I try to reflect on that all the time when I grade,” Breckenridge, 46, said. “It’s very important to me because I know it’s not a conscious behavior, so trying to be vigilant about not judging students based on previous good or bad work is a big deal. I try to be very reflective about the idea that [if] someone did poorly in the past, that doesn’t mean they can’t really excel in the future.”

Like many college students, however, his ultimate career is not what he first pursued in college. He began pre-med at Colgate University in upstate New York, but finished with degrees in sociology and mathematics from the University of Arizona. While he kept his math major when transferring to Arizona, he ditched his chemistry major.

“[Pre-med] seemed like a chore,” Breckenridge said. “There were lots of courses and tasks to complete, but none of it was intriguing.”

What did and does interest him, however, are the many questions surrounding everyday life that were and are unanswered in sociology. “In social science we are still trying to come up with good models for how group dynamics work, the actual components of our regular, everyday life,” Breckenridge said. “There are still things that we are really trying to figure out, and I like that.”

Even career academics can get burned out from school, though. After Breckenridge got his masters in sociology from the University of Arizona in 1993, he left for the music industry. The guitar and bass guitar player had played in bands all through college, but took an unofficial leave of absence from graduate school to work as a recording engineer in a studio. Through that he began his tour of Europe as he traveled with the bands in what was a “really fun way to spend [his] twenties.”

“None of them were very successful, but that’s pretty common for people who play in [more than one] band,” Breckinridge said. “There are many that go on and have very short lives or you play occasionally to help people out. That was certainly my life. For many years [between 1994-1998], that is essentially all I did, which was a life of great austerity, but was still really awesome.”

A changing music industry, though, made Breckenridge’s affinity for school more attractive. “I love school. School is the best,” he said. “And I always really loved being a student. I was never going to be a particularly successful person in the music industry. By the late 90s it became very apparent that the nature of the industry was changing and technology was changing in such a way that people were either superstars or struggling.”

Not wanting to mortgage the rest of his life for a risky music career, returning to academia was an obvious choice. “[Music] is my hobby of choice, but it’s not my career,” Breckenridge said. “Imagine that being a professor means I get to read, write and talk about things that really interest me.” Nonetheless, he is still involved in the local music scene as the associate director of Phuzz Phest, an annual music festival in downtown Winston-Salem.

And while his research is not always tied to music, Breckinridge is currently working on a project regarding the vinyl record industry. His basic question is “How does an industry that has almost failed suddenly respond to increasing demand?” “The whole industry had fallen apart,” Breckenridge said.

The research combines Breckenridge’s curiosity and his affinity for music — sometimes hobbies and jobs can mix.