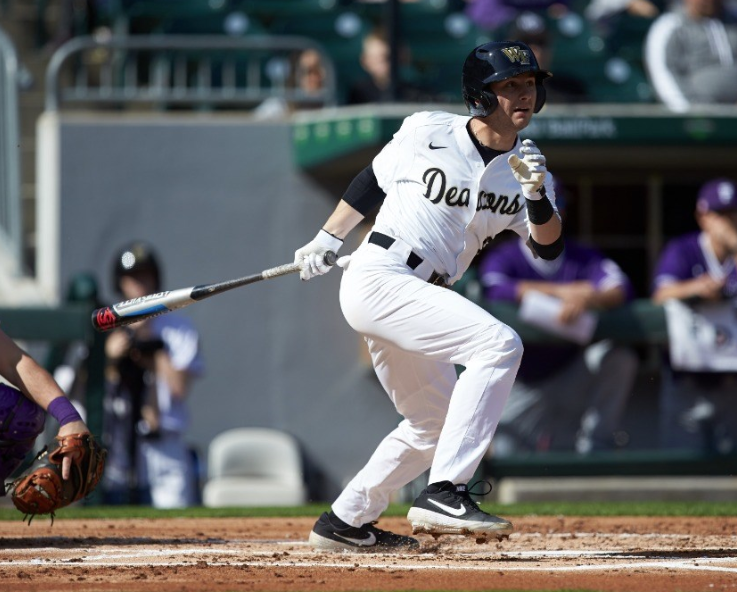 Wake Forest baseball exhibited why Wake Forest fans were so hopeful at the start of the season. The Deacons went 3-1 in the last week, showcasing their balanced but lethal offense and their locked-down sophomore pitching. Even with being blown out by that team down in Durham, the Deacon fans had much to cheer about.

Last week started off strong for the Deacons as they routed the Charlotte 49ers by a score of 14-6. The turning point was a three-run home run in the first by the freshman catcher Brendan Tinsman. The Deacons extended their lead to 11-0 through three innings,  which buried any Charlotte hopes for a comeback. With the rout, Head Coach Tom Walter gave some bench players needed at bats. With it came freshman Michael Wien’s first collegiate hit.

Walter reiterated the importance of Tinsmans home run after the game.

“Tinsman homers, and [we] get a four spot in the first, it was huge. [It’s a] big difference in momentum” said Walter.

Next on tap for the Deacs was Duke. The first game was a massive hiccup for the Deacs, as they were crushed 16-2. A combination of Duke pitchers shut down the Deacon hitters, allowing only two runs on three hits. After a rough first game, the Deacons needed to bounce back against their rival, and sure enough, they did. The first game was a back-and-forth thriller as Duke led three times, but the Deacons crawled back to tie the game each time. A key moment happened in the seventh when sophomore pitcher Antonio Menendez got out of a one-out, bases-loaded jam to preserve the 8-8 tie. Next inning, sophomore Bobby Seymour crushed a homerun to give the Deacs the go-ahead run. The Deacs ended up with 18 hits and a key 9-8 victory.

The rubber match of the series was nail biter. The rivals exchanged runs, and the Blue Devils came back from a 4-2 deficit to send it into extras. In a tight game, you can always count on the hot bat to deliver, and that’s exactly what junior Patrick Frick did. The ACC player of the week was on a tear last week, and he capped it off with a go-ahead RBI single in the 12th inning to give the Deacs a  5-4 win.

The story of the Duke series was the outstanding bullpen work. In the last two games, the pen shut down the Blue Devils, allowing the Deacon offense to climb back from early game deficits. The bullpen gave up zero runs through the last two games, led by sophomore pitchers Antonio Menendez and William Fleming. The duo was electric, combining for 8.6 innings of no run ball on 10 strikeouts.

The Deacs looked like the team Wake Forest fans have been waiting for. The offensive onslaught against Duke illustrated the balance of the Deacon offense.

“That’s what you need. [We] need it from all places in the lineup,” Walter said about the Deacon Lineup hitting from top to bottom. “I like the way we are swinging the bat; I like the way we are stacking quality at bats together. We hadn’t really had that all year, so let’s hope that continues.”

With some huge ACC opponents coming up, including 11th ranked Louisville, the Deacons are going to need to stay focused. It starts with the bullpen. Last week illustrated that the bullpen can shut down lineups for consecutive innings. Close games are on deck for the Deacons, and the bullpen will be heavily leaned on in key situations. The Deacons will need a shutdown bullpen, like they had against the Blue Devils, to keep games manageable in the late innings.

The Deacons travel to Louisville to take on the Cardinals this week. The Cardinals will be hungry against the Deacons after a series loss at home to the Georgia Tech Yellow Jackets. The 11th-ranked Cardinals will be a major test for the Deacons. This series is crucial if the Deacons have any hopes at salvaging a regional NCAA tournament berth. Two wins may not be enough to stay in the regional picture, but it will keep Deacon hopes alive. The series starts Friday at 6 p.m.