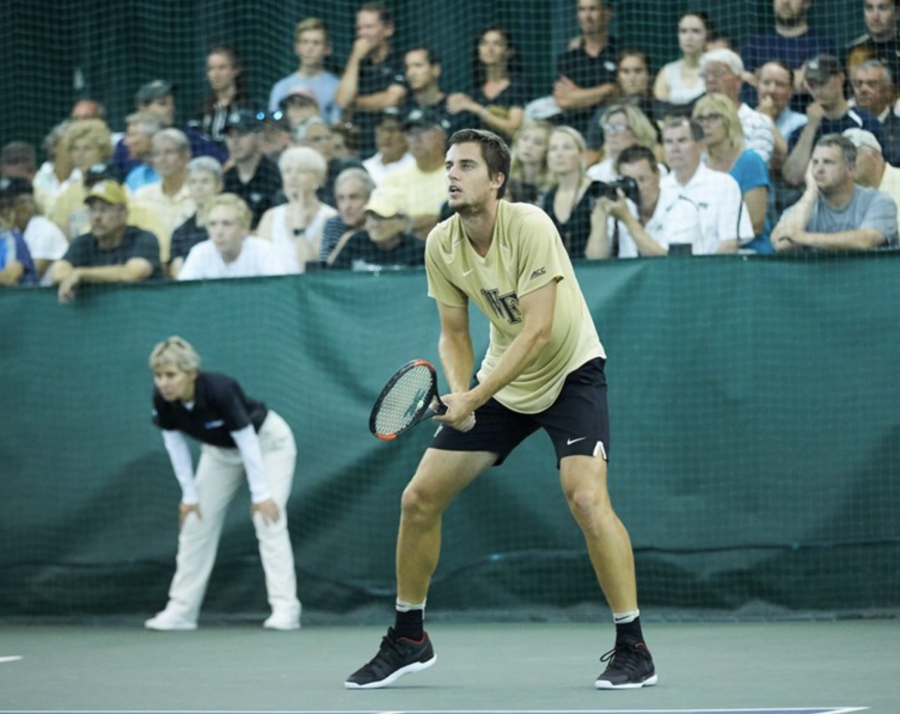 The top-rated U18 singles player in Croatia prior to arriving at Wake Forest, Borna Gojo came to Winston-Salem as a mid-year enrollee to jump-start his tennis career. Prior to Wake Forest, he won a pair of futures titles in doubles, was ranked as high as No. 143 in the ITF junior rankings and was ranked as high as No. 827 in singles and No. 674 in doubles in the ITA rankings. As a sophomore, Gojo really began to hit his stride. To cap off the year, he advanced to the finals of the NCAA Singles Championship, falling to teammate Petros Chrysochos in the finals. He was named the Most Outstanding Player of the NCAA Championships as well as a NCAA Singles All-American. He also earned countless awards for the regular season, finishing the year as a First Team All-ACC selection. He finished the year 20-3 in singles, playing primarily at the No. 1 spot, finishing the season ranked No. 6 nationally in the singles rankings. His biggest win of his career came in the NCAA Singles Championship semifinal, where he defeated No. 2 Nuno Borges. Gojo was also a force in the doubles spot, finishing 17-7 in doubles competition, including a perfect 7-0 mark in the No. 1 spot. He finished the year No. 14 in the doubles rankings with partner Skander Mansouri.

Samantha Wexler: Overall, how has the spring gone for you and for the team?

Borna Gojo: This team always looks to win everything. Obviously, at the National Indoors, we lost the final. So, I’m not really happy with what we did on the first part, especially me. I was injured and couldn’t play my best at the indoors. Right now, I am healthy and ready, and we are playing good tennis now. I am just looking forward to all the tournaments coming like the ACCs and NCAAs. We are just going one by one and I think we are playing better and better.

BG: We just like each other. The diversity gets us going. We have, obviously, Czech people, Indian people and people from Israel, Russia, Croatia and Cyprus. There’s so many people from different countries that I think it has actually helped us to be close to each other.

SW: There has been a very high standard of play under this coaching staff. What in particular do they bring to the program to continue to compete in the ACC?

BG: They work 24/7 for this. It is not like they just come and tell us, “OK, you are going to go out and do this and that, and we are going to win.” No, it starts with recruiting and going to trips in mid-season. So, whenever someone is ready or thinking about going to college, the coaches work on getting good players. Then again, on the court, they just [allow us] to spend as much time as we want. I am the first one who can tell you that I try to practice as much as I want, and they never ever said no. I think that’s the recipe to be great.

SW: What are some of the goals that this team has coming down the stretch, and what goals did you set out for yourself?

BG: [The goal] is always to win everything. After last year, I don’t think there’s much doubt among players and coaches on what we can do. As I said, I hope we win the rest of the season and the ACCs and NCAAs.