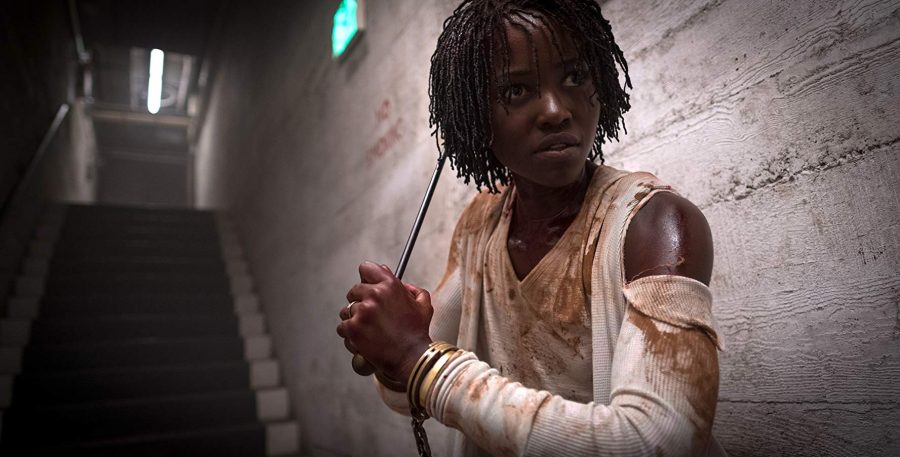 After a deluge of repellent trailers convinced me cinema had gone dormant in 2019, the film I went to see began, and I was soon smiling as the smithereens cleared to reveal Jordan Peele’s Us, a film of sprawling imaginative scope, shot through with nervy suspense and political poignancy. It is rare that a filmmaker succeeds consecutively, bar none. If Friedkin can stumble after The French Connection and The Exorcist, and Bogdanovich can genre-dabble himself out of relevance after a masterpiece like The Last Picture Show, it would have been no surprise if Jordan Peele’s next film failed to execute on the highest level. The critical praise and cultural suffusion achieved by Peele’s first film, Get Out, could have led clamoring studios to interfere in his second. Just as lucrative (usually artistically limiting) contracts can dilute vision, moneyed liberty can also turn a film into turgid nonsense. But Peele seems to be deaf to the rhyme of history, skipping the famous sophomore slump and establishing himself as one of the great auteurs of our time.

Peele’s overt strategy is a simple one: to not be overt. To wit, here he is at the 2019 Oscars, shewing what should be the mission statement for his entire industry: “I want to make movies that contribute to the conversation and are fun to watch. That’s it.” This goal could have meant serviceable political films under a cheap, campy veneer, but, instead of taking the shortcut, Peele has produced two dense works of art. His films, through their peerless creative conceits, are genuinely engrossing and complex, using their political undercurrents to bolster their novelty. In Us, as in Get Out, the political moves within the conceptual slipstream, inside the film itself instead of in its sights. Work like Peele’s, which blends entertainment with political energy, brings horror films out of their autopiloted, slasher-trash complacency and back into the world of serious art.

Us centers on Adelaide Wilson, who we first meet in 1986 as a little girl (Madison Curry) visiting the boardwalk, wearing a “Thriller” t-shirt and clutching a candy apple. As in most horror films, someone must wander off; Adelaide leaves her drunk, juvenile father at the Whac-A-Mole station and ends up on the beach, where she discovers a house of mirrors containing more than just reflections. Cut to present day, where Adelaide (Lupita Nyong’o) is an adult, with a husband, Gabe (Winston Duke), and two children, Zora (Shahadi Wright Joseph) and Jason (Evan Wilson). The family is taking a trip to their vacation home. Friends with the Tylers (Tim Heidecker and Elizabeth Moss, playing a version of the grown-apart boozers from Revolutionary Road), who have twins of their own (Cali and Noelle Sheldon), the Wilson’s live a comfortable, upper-middle class life, yet Adelaide’s past burbles disconcertingly in the background. When Gabe needles her to go to the beach (and boardwalk) of her childhood, she demurs. And while the film’s build is relatively quick, the premise is so creatively complex that the unraveling is more germane to the project than any specific climax would be. The family is soon confronted, after an unsettling end to their day at the beach, by their bestial facsimiles (each actor in a very different role), who break into the Wilson’s home and attempt to hunt them.

But just as most great sports movies don’t really care about sports, Us doesn’t really care about creating nightmares, at least the traditional sort. The film merely inhabits a universe of extremity as a means for creative experiment, and the lack of churned-out, plucked-from-the-shelves jump-scares or other such inanities purposely allows the film to confound and entertain simultaneously. Formally, Us wants for nothing, and perhaps the most memorable quality of the film is its music and sound. Michael Abbel’s score, christened by the original song “Anthem,” which plays like audio pirated from a human sacrifice, alternates between deep, gothic throngs and screeching strings. But dashed among the orchestral interludes are occasional popular tunes, ranging from Janelle Monáe to the Beach Boys to Mobb Deep (at one point, “Good Vibrations,” is juxtaposed with N.W.A.’s “F*ck tha Police”).

The integration of pop music within a more classicist score (as well as actors’ comedic commentaries) speaks to a lack of overly-serious moralizing, rendering any exact, political schemata inadequate. What the doppelgängers precisely represent is a complicated question, if not an irrelevant one. Samuel Johnson’s implication that “he who makes a beast of himself gets rid of the pain of being a man,” seems apt, since the doppelgangers general contempt for civilization stems from its arbitrary set of limitations, otherwise known as manners. But their revolutionary gesture to replace manners with instinct as a sort of new-world precept could also be pointing to an oft-ignored slice of our humanity — passion. This broader interpretation surfaces less from a political upshot than a universally modern sensibility: the notion of self-suppression that results in the dampened and deeply miserable modern psyche, divorced from its most natural inclinations in favor of “reasonable” things.

But, sociologically, the doppelgänger’s debasement could be a rejection of Rousseau’s idyllic state of nature to show the socially imposed reality of oppression that foists primordial concerns onto those deemed lesser. The doppelgänger’s bestiality then becomes a partially defensive reaction against the violence historically done unto civilization’s unworthy aspirants, mutating their historical oppression into justified rancor. Oppressed communities, although tethered loosely to society, are forced to live peripheral lives dominated by survivalist instinct, which inevitably engenders contempt. The Wilson’s found a way through the system and have prospered, but what have they dispensed of or capitulated to?

Most of the facsimiles are also pre-verbal (all except Adelaide’s), which conjures Franz Fanon’s claim that “to speak means … above all to assume a culture, to support to weight of a civilization.” The inverse of Fanon’s assumption is linguistic privation, an oppressed or marginalized people’s inability to articulate within a social context. Even if language itself remains similar, perceived idiolects or subjective interpretations amount to civic exclusion. So, perhaps Us also seeks to expose the thin, linguistic layers (not unbridgeable cultural rifts) that exist between peoples.

Us raises these questions and more, and the inexhaustibility of the film speaks to its potential longevity as art. The socio-political density of Peele’s film surfaces as we like it, much like Greek auteur Yorgos Lanthimos’s scalpel-sharp satire can issue torrents of subjective philosophy. Neither filmmaker is here to tell you what their work means, yet the spread of intersubjective possibilities makes for progressive and challenging art. Like the great directors of the ‘70s, whose polemics lived in the totality of their art and whose cultural critiques also coincided with much of popular film taste, Jordan Peele makes entertainment that tingles with ideas. Us contributes not only to “the conversation” but to cogitation, to the aesthetical viewer who craves a healthy dose of perplexity.