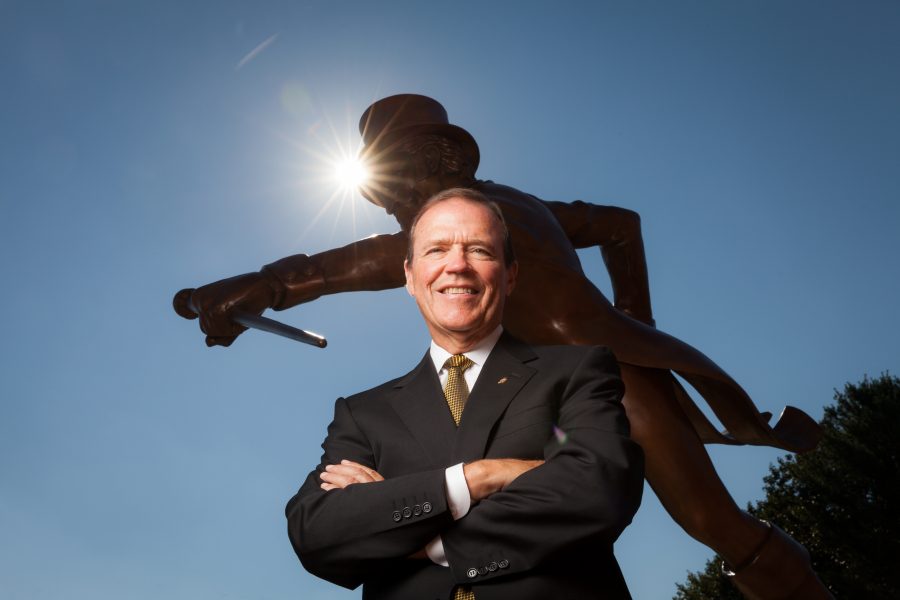 Wake Forest Athletics Director Ron Wellman poses for a portrait in front of the Demon Deacon statue at Deacon Tower on Wednesday, September 4, 2013.

Since being named the fifth Athletic Director in Wake Forest’s history in October 1992, Ron Wellman has helped to shape the athletic teams of Wake Forest’s campus on and off the field. Four national championship and 20 ACC titles have been achieved since Wellman took over. Three-straight bowl victories and nonstop victories in Men’s Soccer are some highlights in the recent past.

The most notable improvements to passersby are definitely the new athletic facilities on campus. McCreary Field House opened in January 2016 for the football team and other sports teams. New practice fields at the Doc Martin Football Practice Complex were also installed in 2016. The baseball team opened a new $14 million Baseball Player Development Center at David F. Couch Ballpark. Construction projects continue with the Sutton Performance Center and Shah Basketball Player Development Center, both due to open in 2019. Additionally, the new Wake Forest Tennis Complex opened and hosted the 2018 NCAA Championships as well as the annual Winston-Salem Open. Off the field, Wellman has stressed overall development and growth to the whole student-athlete. He has aspired to attain coaches who worked with the assets of the university and hold athletes to the highest standards while preparing student-athletes for life after college.

His children and their spouses have a combined eight degrees from Wake Forest, and one of his children works here. In retirement, Wellman looks to cheer on the Demon Deacon teams that he has shaped through his time here and also spend time with his ten grandchildren, who range in age from 4 to 13.

Samantha Wexler: Looking back at your time at Wake Forest, what are some of the things that you are most proud of?

Ron Wellman: The people in our program, the quality of the individual and what their values are. The coaches, the way they coach their student-athletes and the way they care about them beyond their athletic ability. I just think that we’ve got a bunch of folks who really understand and support the values, the standards and ideals of Wake Forest and for that reason, I think they are very successful in what they are doing.

SW: What did your decision to retire look like and how is the transition period so far?

RW: When President Nathan O. Hatch and I talked about it, we thought that this would be a good time. I didn’t want to retire and announce it in November and be here for another six months or whatever. I don’t think that I would function that well as a lame-duck Athletic Director for that period of time. This period of time, just seven weeks, is more reasonable. Hopefully, I can get a lot of things done and make the transition easier for John Currie, too.

SW: Under your influence, the non-revenue sports have really risen to prominence.Can you speak to the development of those programs?

RW: It’s always the coaches; the coaches establish the ceiling for the program. Our ceilings are very, very high for our programs right now because of the caliber of coaches the we have. We have taken the view that our non-revenue sports are just as important as our revenue sports. Those athletes are just as important. We want them to have the same experience as the revenue athletes, so we want to make sure that they have the opportunity to compete for championships, and we’ve tried to support them in the same manner as we do the revenue sports.

SW: I know the Danny Manning decision was controversial for the fan base. As you mentioned that the current coaches really represent what the university stands for, is that a main reason that Manning is staying on?

RW: Yeah, I believe that he is the best person to get us on the right track next year. We need stability in our program, and we need to be a veteran team to be good. We are going to have an experienced veteran team next year. I think that he is going to take full advantage of that and produce a product that everybody is going to be pleased with.

SW: Do you have any plans for when you won’t come to Wake Forest every day to work?

RW: I’ll still be around. These are my teams, and I love to follow them and go to games, so we will certainly be doing that. In addition to that, we have ten grandkids that live in this area from 4 to 13, so they’re in all kinds of activities and we will be following them around and being a nuisance to them, undoubtedly.