MLB: One Week Into The Season 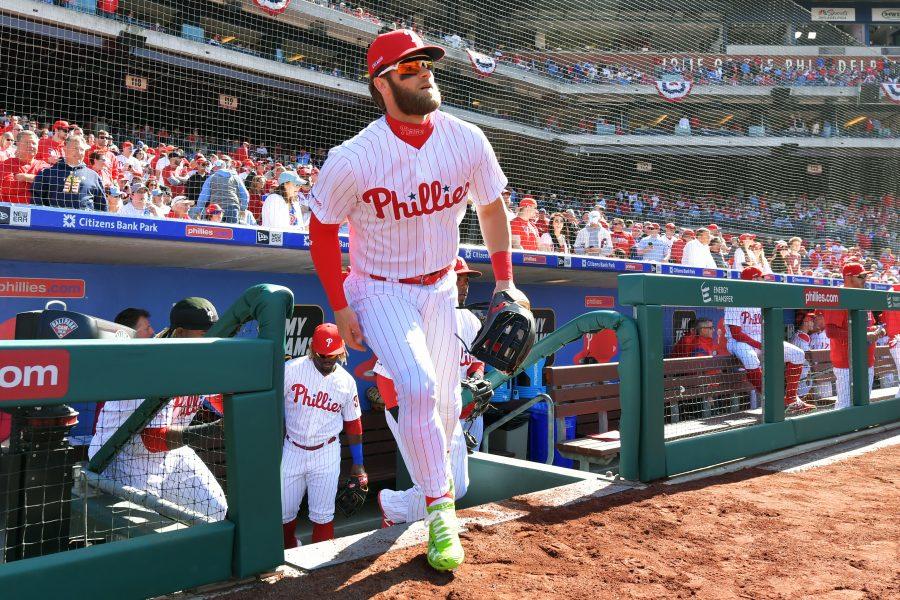 Bryce Harper #3 of the Philadelphia Phillies runs onto the field before the game against the Atlanta Braves on Opening Day at Citizens Bank Park on March 28, 2019 in Philadelphia, Pennsylvania. (Drew Hallowell/Getty Images/TNS)

In football, seven games in would be practically halfway through the year. Thankfully, we still have five months to go in the MLB season. With all-stars like Clayton Kershaw and Francisco Lindor still yet to debut and playoff races already heating up, there’s lots of fun to look forward to. Here’s a recap of what has happened so far.

With multiple injuries depleting the Milwaukee Brewers bullpen, Josh Hader has been leaned on heavily in the early stages of the season — and so far, he has delivered. He has appeared in four games so far this year, and only two batters have reached base against him. Through four games, he has struck out 10. Hader won the award last season for the best reliever in the National League, but somehow he might be better this season. The most amazing thing about Hader’s dominance this season, however, is that he has almost exclusively thrown fastballs. Everyone knows it’s coming, but he is still unhittable.

The spotlight has been on Bryce Harper since he was a high schooler on the cover of Sports Illustrated in 2009, but it is shining brighter than ever after he signed a 13-year mega-deal this offseason. Phillies fans have not been disappointed. Harper hit three home runs and drove in five runs. In his return to Washington, D.C., this week, Harper hit one of those home runs off former teammate and CY Young Award winner Max Scherzer. Most importantly, the Phillies started 4-0. It’s early, but so far so good for the new kid in Philadelphia.

Besides Harper, lots of big names changed teams this offseason. Paul Goldschmidt was traded to the St. Louis Cardinals and has already hit four home runs, good for second in the MLB. Andrew McCutchen has two homers of his own, along with five runs scored as the new lead-off man in Philadelphia. On the other hand, new San Diego Padres 3B Manny Machado has struggled to adjust to his new team. Machado was batting a paltry .217 this season through six games, and the Padres are 3-3. No one wants to overreact, but Manny needs to prove himself sooner rather than later.

Back at it again

Reigning NL MVP Christian Yelich was pegged by many as a candidate for regression this season after his breakout 2018. Yelich clearly wasn’t listening, as he tied a record by hitting a home run in each of the first four games he played this season. That number leaves him tied for second in the MLB. The Brewers are starting strong at 5-1, and Yelich is leading the way.

The Boston Red Sox and New York Yankees were supposed to run away with the AL East and battle it out in the playoffs as World Series favorites. Neither team is starting strong, however. The Yankees were 2-3 to begin the year and have added Giancarlo Stanton and Miguel Andujar to an already overflowing injured list. The Red Sox, on the other hand, were 1-5, and seem to have forgotten how to pitch. To make matters worse, the Tampa Bay Rays look like a legitimate threat that will last the whole season. They say every game counts, so these slow starts may come back to haunt these playoff hopefuls.

Making us all feel old

Two of the top free-agent pitchers remain unsigned. Even as multiple teams suffer injuries and struggle with their pitching, no one seems to be interested in Dallas Keuchel or Craig Kimbrel. This might last all the way through June, when the draft pick compensation attached to signing either of these players goes away, but contending teams shouldn’t wait to make offers. Every team is in need of another starting pitcher, so Keuchel is an option for anyone. Look for the Braves, the Red Sox or a surprise contender like the A’s or Rays to make a play for Kimbrel.

Home runs have been increasing across baseball for the last few years, and the Los Angeles Dodgers have one of the strongest line ups in all of MLB. However, it was still quite shocking to see the Dodgers hit eight home runs on Opening Day. They are tied for first in the league at the moment with 17 home runs so far this year. The other team tied with them is the Seattle Mariners, who also boast the best record so far this season. At the other end of the spectrum, the Indians, Rockies, Tigers, Angels and Twins have one home run each, and except for the surprising Twins, none of them have winning records. A small sample size, for sure, but it looks like once again the long ball will determine the winners of a lot of games this season.