“Sawstainability” In Action At Wake Forest 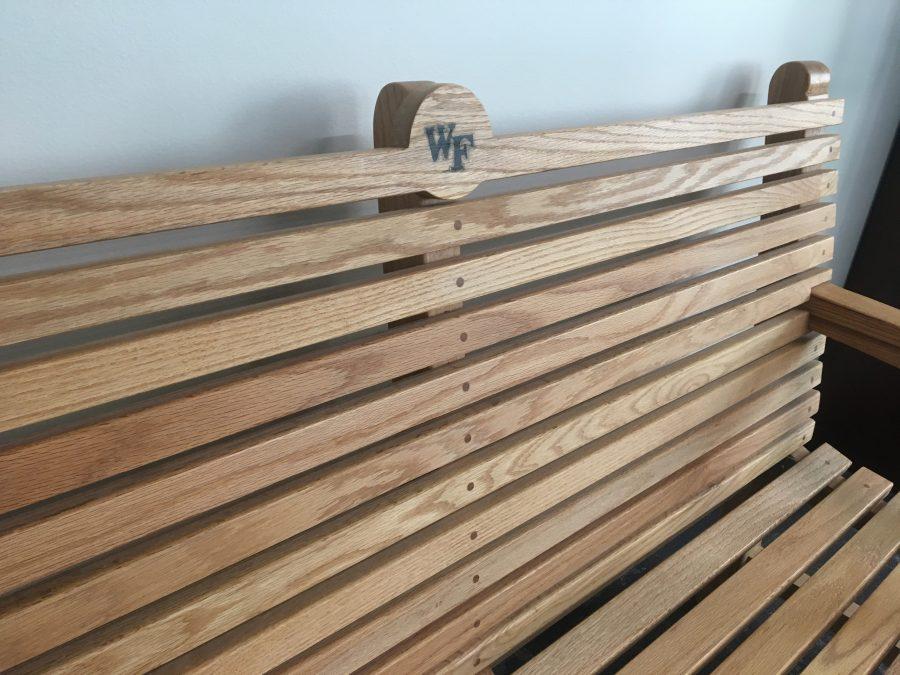 Wake Forest, by the very nature of its name, has a certain arboreal identity. Trees are becoming more of a revered commodity both within and beyond Wake Forest’s ivied walls, so finding innovative ways to maximize the value of tree-based products on campus is increasingly important.

“That tree that came down, it’s going to stand a long time, just in a different form,” said Frank Shelton, director of housing in the Office of Residence Life & Housing.

A joint effort between Shelton’s office and Facilities & Campus Services to repurpose and reuse old furniture and reclaimed wood on campus, cleverly nicknamed the “Sawstainability” initiative, has been a point of pride for both departments.

Since 2012, around 2,100 wooden bed frames have been removed and replaced in residence halls across campus. Of those, nearly 40 percent have been kept and repurposed, while the remaining 60 percent have gone to foundations like Goodwill and Habitat for Humanity.

“We have yet to put the first piece of wood [from old furniture] into a landfill,” said Shelton.

Landfills have typically been a common grave for wood materials of all kinds. The Environmental Protection Agency estimates that landfills received around 11.1 million tons of wood in 2015, which was about 8 percent of all material solid waste sent to landfills that year.

Manufacturers, consumers, companies and schools across the country are committing to “upcycling” efforts to keep reusable materials out of landfills. Designer William McDonough played an integral role in popularizing the idea of upcycling with his 2002 book “Cradle to Cradle.” Upcycling involves recycling and reusing components of a product, giving them a new purpose and effectively reducing waste. Saving the old wood from rotting away in landfills is not just a sustainability play. By donating much of the wood that the construction team cannot repurpose, the school saves a sizeable chunk of change in transportation costs and assorted dumping fees.

“It costs about $37 per ton to dump anything in a landfill,” said Shelton, “and it’s even more to move it out of a building, put it in a truck and haul it away to dispose of it. Through partnerships with some local non-profits, we let them take it away so the school doesn’t have to pay for anything.”

A case study conducted by the two departments determined that the upcycling efforts have saved about $145,000 for the university since 2012.

So what becomes of the furniture that can be repurposed? J.L. Bolt, the university’s general construction superintendent, is the mastermind behind transforming old bed frames into something entirely new.

“He’s sort of a wood guru,” said Zach Blackmon, assistant director of Operations in Residence Life & Housing. “He and his team take all the materials and turn them into some really cool things.”

The “Sawstainability” plan was born from a need to get rid of a growing pile of old bed frames stacked idly in a warehouse, as well as to find a use for numerous trees that were removed from campus when construction began on Dogwood and Magnolia residence halls in 2012.

Fortunately, a lot of students were falling out of their beds.

“We had a lot of requests for guardrails for lofted beds, but they cost $75 apiece,” said Shelton. “We had the carpenters take some of the old wood and have a go at it, and they ended up making them for about $12.”

Encouraged by the sustainable and fiscal benefits that the guardrails bore, they began making wooden frames for white boards, mirrors, cork boards and sandwich boards for event listings in residence halls and classrooms across campus. Bolt and his team finished these jobs then began crafting benches, chairs, desks and tables that can be found scattered across campus.

“You can always tell by that lighter color you see in some wood furniture outdoors,” said Blackmon.

Shelton is quick to point out that his office isn’t a one-trick pony when it comes to sustainability efforts. Beyond repurposing old furniture, his office has overseen a number of sustainability-driven changes to residence halls both old and new. Among these initiatives are upgrading lighting systems to motion-sensing LED lighting and replacing wasteful C-fold paper towels with rolled paper towel dispensers.

Wake Forest students appear to be generally aware of these more high-profile improvements, but many don’t consider the source of the wood they sit on, let alone the significance of its journey to its current form.

“I guess it’s neat that they give things a second life,” said junior Monnica Rodriguez as she relaxed on an upcycled-material bench near Scales Fine Arts Center. “But how much of a difference does it really make?”

“Part of our mission is not only to provide housing, but to educate and we do that through ways that aren’t always intentional or obvious, but they’re there,” said Shelton.

Since 2012, Wake Forest has purchased about 1 million pounds of wood. Shelton recognizes that figure is imposing, but reaffirms his commitment to squeezing every ounce of value out of the lumber on campus.