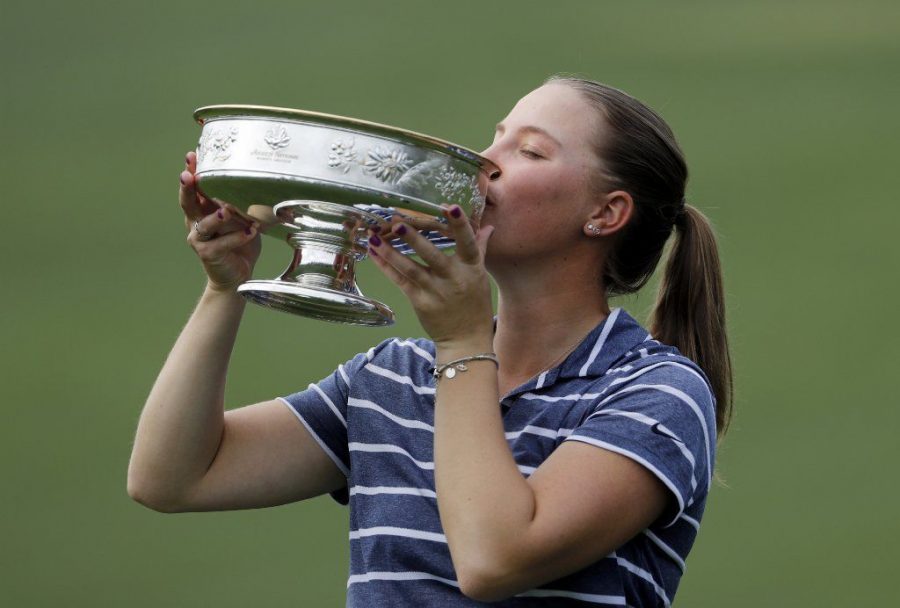 On Saturday, April 6, senior Jennifer Kupcho became the first champion of the inaugural Augusta National Women’s Amateur. Just a few days prior, Kupcho hit the ceremonial first shot in the tournament as well. Kupcho, the ACC co-player of the month for March, is currently the No. 1-ranked amateur in the world and in the running for best athlete to ever come through Wake Forest. She currently has nine career wins — the school record is ten —  and has three events left in her senior season. It is highly likely that Kupcho will leave Winston-Salem as the most decorated golfer to ever come through Wake Forest, a high honor given to names like Arnold Palmer and Bill Haas in the program.

The inaugural Augusta National Women’s Amateur hosted 72 of the top female amateurs in the world in golf-crazed Augusta, Ga. Rounds one and two were held at the Champions Retreat Golf Club. The field shrunk in size after each round, culminating in the final round on Saturday, April 6, at Augusta National.

Ironically enough, Kupcho originally turned down the invitation to the event, given that the Wake Forest women’s golf team was supposed to have a tournament over the same weekend. After the tournament was canceled, a quick call to the tournament director got her back in the field, and look what it led to.

After day one, Kupcho sat at 4-under 68. She was tied for the lead after the first round of the event with Zoe Campos and was the only player in the field of 72 to play the first round without a bogey. On day two, Kupcho continued her strong play, leading the field after 36 holes. She shot a 1-under 71 during the second round to finish the day at 5-under, holding a one-shot lead. She entered the final round at Augusta National Golf Club with a one-shot lead over Maria Fassi, who sat at 4-under.

On the final day, Kupcho posted a final round 67 to finish the historic tournament at 10-under par and became the first woman to win at Augusta National Golf Club. Her final six-hole stretch was arguably her best ever, playing holes Nos. 13 through 18 at 5-under par to erase a two-shot deficit.

Kupcho played the best back nine the course has seen since 1986, when Jack Nicklaus finished played on the same six holes at 5-under par. Even more incredible is the fact that she did this while battling a bad migraine that impaired her vision for a handful of holes. Both her first tee shot and her eventual victory was a milestone for golf, for women and for young golfers everywhere looking for a role model.

“I think, first of all, for me to hit the first tee shot of the tournament, just to open it up, it was a great honor to be able to do that,” Kupcho said. “And then to be able to hit the last putt and to win, it’s just amazing.”

Kupcho was paired with University of Arkansas senior Maria Fassi in the final pairing, and the two exuded a joyous energy and sportsmanship that many have described as uncharacteristic given the competitive nature of the event. For Kupcho and Fassi, that is how the game should be played. Interestingly enough, Kupcho and Fassi were the only two players to have deferred their LPGA cards until after completing their senior seasons of golf at their universities.

“Coming out with Maria in the final group with me, I think both of us just wanted to send the message that golf is about having friends [and to be out there with her] we were cheering each other on, and that’s kind of how golf is supposed to be,” Kupcho said. “And to make it look fun; it is fun. So to make it look that way for everyone watching, I hope it encourages people to pick up a club and go play.”

On April 8, both Kupcho and Fassi traveled to New York City to discuss their experience at the historic event. The duo took to the Today Show and The Tonight Show Starring Jimmy Fallon to talk about things ranging from Kupcho’s historic win even though she had a migraine that caused vision loss to Fassi accidentally taking her teammates’ clubs on the trip with her.

“We had a lot of fun out there, and I hope everyone saw that,” Kupcho said on the Today Show Monday. “Golf is a fun game and that is how it’s supposed to be played.”

After a full day in New York on Monday, Kupcho traveled back to Winston-Salem to begin a full day of classes and interviews at the Arnold Palmer Golf Complex on campus. She was overwhelmed with love from friends, teammates and Wake Forest golf alumni over text, Instagram, phone calls and more. The most surprising celebration, however, was her Introduction to Western Music professor, Dan Locklair, throwing her a celebration in class on Tuesday.

“Out of nowhere he showed the picture in class and started talking about me, and I was about half asleep, but I looked up, and that’s me on the screen,” Kupcho said to local press Tuesday on campus. “At the end of the class, he had bought donuts from Krispy Kreme and we kind of had a party, so it was amazing.”