Looking Back On This Year’s Final Four 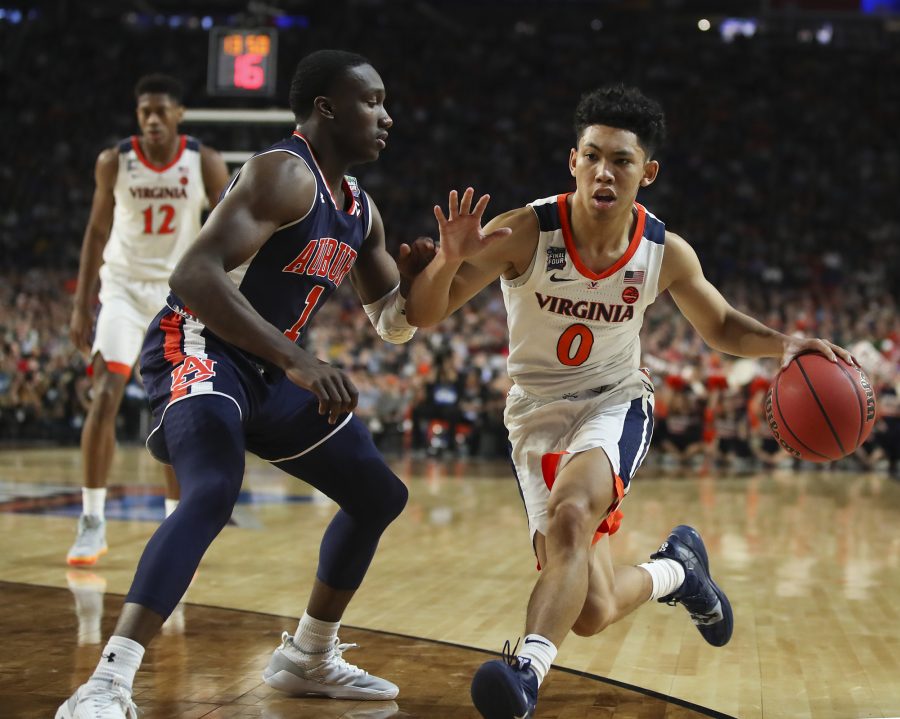 Virginia's Kihei Clark (0) drives against Auburn's Jared Harper (1) during the second half in a semifinal of the NCAA Tournament Final Four on Saturday, April 6, 2019, at U.S. Bank Stadium in Minneapolis. Virginia advanced, 63-62. (Jerry Holt/Minneapolis Star Tribune/TNS)

An electrifying season in college basketball came to a close on Monday night as No. 1-seeded University of Virginia cut down the nets in Minneapolis after a 85-77 win in OT over No. 3 Texas Tech.

The ACC regular season champion avenged their historic loss to No.16-seeded UMBC in last year’s tournament. The run appeared to be one of destiny, as the Cavaliers were trailing with 15 seconds of regulation in each of their last three games of the tournament, but continually found ways to emerge victorious.

Following Mamadi Diakite’s late-game heroics in the Elite Eight to help Virginia take down No. 3 Purdue, the Hoos squeezed out another tough late victory over No. 5 Auburn in the first National Semifinal game on Saturday night. The stout defense and slow offense of Virginia encountered a polar opposite squad in the high paced, offensive-minded Auburn Tigers.

Auburn entered the tournament scorching hot, having not lost a game in the month of March. After narrowly escaping an upset bid by the New Mexico State Aggies in the first round, Auburn went on to defeat three blue-blood programs in Kansas, North Carolina and Kentucky on their way to Minneapolis.

Auburn trailed by 10 with just five minutes remaining, but a 14-0 run featuring two 2-pointers from Bryce Brown gave the Tigers a four-point lead with 16 seconds remaining. After UVA’s Kyle Guy got a contested 3-pointer to fall, a make and a miss from Auburn’s Jared Harper gave the Hoos the ball back down two with seven seconds left on the clock.

Virginia’s Ty Jerome lost the ball trying to dribble behind his back bringing it up the court and blatantly double dribbled as he picked it up, but no call was made by the officials. Guy was fouled in the corner with 0.6 seconds remaining shooting a three, a call that caused much outrage, but clear contact to the body was made by Auburn’s Samir Doughty. He went on to hit all three free throws to give UVA a 63-62 lead, which was the final score.

The much-anticipated championship game on Sunday night was predicted to be one of the lowest-scoring finals ever, as the over/under was set at 120. Texas Tech had the top defense in college basketball this season, and the consistent defensive juggernaut that is Virginia boasted the fifth best.

UVA stretched their lead to 10 points with about a quarter of the game remaining, but Texas Tech staged a run that tied the game up at 59 apiece with three minutes left to go.

Down one with under a minute remaining Culver took ACC defensive player of the year Deandre Hunter to the basket, spinning down the lane and finishing with his left hand, giving the Red Raiders a one point lead. After a Jerome miss, Tech’s Norense Odiase knocked down two free throws to stretch their lead to three.

In another last second comeback effort, Jerome drove into the lane, and as the defense collapsed, found a wide open Hunter who knocked down a three from the corner to tie the game at 68. Culver missed a questionable pull up three with five seconds remaining, and the game headed to overtime. UVA pulled away in the final minute of the extra period, securing the championship trophy.

Twenty-four points in the final as well as clutch shot making in the semifinal awarded Guy with being the Final Four Most Outstanding Player. Hunter scored 22 of his 27 points in the second half and overtime, also adding nine rebounds Jerome added 16 points and eight assists, none more important than his kick out to Hunter.

Head Coach Tony Bennett and his Cavaliers rejoiced as the confetti fell in Minneapolis, redeeming themselves to the ultimate extent after last season’s disaster.